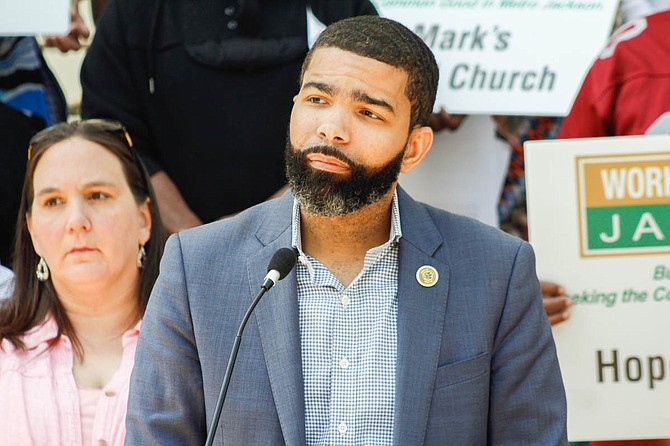 Speaking out for the first time since the Jackson Zoo announced in March that it would likely relocate to LeFleur's Bluff State Park, Mayor Chokwe Antar Lumumba said on April 11 that a move would be "disrespectful" to west Jackson and its residents. Photo by Stephen Wilson.

JACKSON — In his first public statement since the Jackson Zoo announced its board is now supporting its relocation from west Jackson to LeFleur's Bluff State Park close to Rankin County, Mayor Chokwe Antar Lumumba sternly advocated for the zoo to stay put. The mayor said he does not believe his message has come too late in the process to stop the move.

"I don't believe this is a closed discussion," Lumumba said outside Jackson City Hall on April 11. "I believe that as we talk about investment, there is something to be said about the conditions of the zoo and how it affects the attendance."

The mayor called the relocation "disrespectful" to the history of the zoo and the community it has been in for a century, pointing to other factors that led to its decline over the years.

"To have this very short-sided analysis of being in west Jackson as being the only factor which has led to the decline is disingenuous, and we're seeing a zoo that has survived for more than 100 years," he said. "And I believe that we're smart enough to allow it to survive now as it stands."

Lumumba believes that there has been a decline in marketing for the zoo, which in turn also affects attendance. He also blamed the animals, as he recalled going to the Jackson Zoo during field trips and seeing elephants and lions that are no longer there.

Members from Working Together Jackson, the Zoo Area Progressive Partnership, Rosemont Missionary Baptist Church and other community groups stood on the steps behind the mayor and other speakers advocating for the zoo to stay put.

Heather Ivery, a long-time Jackson resident and president of the Zoo Area Progressive Partnership, championed the mayor's sentiments. She told the Jackson Free Press in an interview earlier this month that her organization was left out of the decision to move the zoo.

"For the past few years, we have heard excuses about why the zoo can't stay in west Jackson, mostly related to the supposed undesirability of the area around the zoo," she said Wednesday. "We acknowledge that the zoo and the neighborhood around it need more support—a lot more support. But west Jackson and its residents will not shoulder the blame for the zoo's inability to survive."

Ivery cited years of disinvestment and neglect as some of those reasons for the zoo's struggles. The City of Jackson provides funding to the Jackson Zoo, which has declined in recent years as the City itself deals with its own budget crisis of sorts. Zoo Executive Director Beth Poff told the City she needed $1.5 million last year and got $980,000 at most in the last two fiscal years.

Lumumba said he is not removing any alternatives from the table including possibly using the zoo's lease as leverage, as it ends in September, seeking state funding from the Legislature and also moving forward with blight-elimination programs such as a Mississippi Home Corporation grant the City requested in January.

The mayor said he wants to save the zoo to connect all of Jackson, evoking words from the blockbuster film "Black Panther."