‘Crank It Up’: Taking Action Against Blight 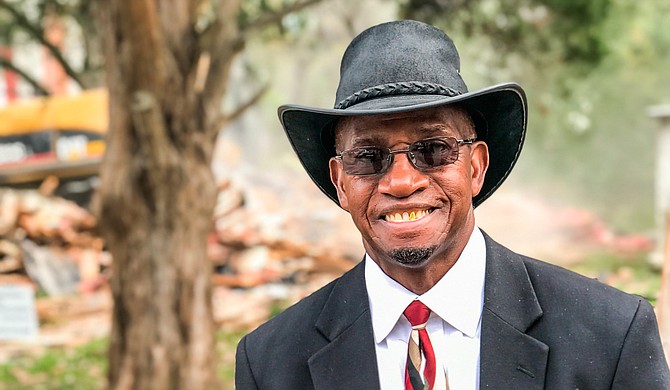 Jimmie Edwards is the pastor at Rosemont Missionary Baptist Church, which is part of a partnership that is tackling blight in west Jackson. He is pictured here at a demolition across from Lake Elementary School on Nov. 16. Photo by Ko Bragg

Unsightly at best, a former drug house at its worst, a single-story, boarded up bungalow house sat across from Lake Elementary School in west Jackson. Overgrown trees and brush in the yard seemingly swallowed up the crumbling structure. Parents, children and neighbors daily passed by the abandoned property they had come to accept as commonplace.

On Thursday, Nov. 16, a group of motivated community members held a public demolition of this home in front of about a dozen students from the school. The children emerged just before the demolition in a single-file line, all dressed in their navy-blue tops and khaki, navy or black pants. Touting an astronomically improved school rating, principal LeKeisha Sutton stepped up to the podium set up in the yard that was mostly sticks and grass.

"Hey, hey, what do you say?" Sutton said, the students echoing her chant and the call and response continuing twice over. Sutton was once in the shoes of the students who wrapped around the podium as she spoke—she is a product of Jackson Public Schools, including Lake Elementary. She spoke about encouraging her students to take pride in their community and where they live, saying that becomes possible through community partnerships both in the school and in the neighborhood.

"Well, of course, to the students it was an eyesore—it's an abandoned home," Sutton told the Jackson Free Press later. "But one of the things is our boys and girls see this so often, they become accustomed to this. The revitalization lets our boys and girls know that this is not—your community does not have to look like this."

Sutton has been the principal of Lake for two years, and in the last year it went from an F-rating to a B-rating. Sutton strives for an A-rating though, and says they are less than 20 points away. She hopes that what she teaches her students inside the classroom about pride and community involvement will work in tandem with neighborhood improvement so that the future adults of Jackson can see positive changes in their home city.

"So this is a true testament and example of how all those entities work together and what we're talking about in the school—we're bridging that gap between school and the community—it's a partnership," she added.

Sutton's students had crossed the street with her to get a safer view of the house demolition.

"Crank it up," the crowd of about two dozen people yelled at the man operating the bulldozer that would soon flatten the house across from Lake Elementary school and another one just a block away.

"It shouldn't take that long," onlookers correctly estimated to each other. The house crumbled at the bulldozer's first brush against the siding.

The crowd consisted of a visually diverse group of people from Revitalize Mississippi, the Rosemont Community Land Trust, Rosemont Missionary Baptist Church and the nonprofit formed in conjunction with it—Rosemont Human Services Inc., all of which united to clean up west Jackson.

Revitalize Mississippi donated the demolition services and will continue to assist the Rosemont Community Land Trust as it develops and grows. Andy Frame, the executive director of Revitalize Mississippi, likens it almost to chemotherapy, as he refers to the blight throughout Jackson.

"And then there are dozens of properties in this community that need to be torn down because they're essentially they've been abandoned for years," Frame continued. "It needs a concerted team effort to clean that up, but at the same time, just cleaning it, just doing the blight elimination is not enough. It has to have a sustainable solution going forward."

Frame added that the blight cleanup will work harmoniously with the formation of community land trusts to not only revitalize the community, but to sustain such progress.

Rosemont Missionary Baptist Church sits right across from the second house flattened at the demolition. Rosemont Church and Revitalize Mississippi are helping to revitalize the neighborhood through the community land trust model. Rosemont Pastor Jimmie Edwards, who has been known to tackle blight in his community with his own "Bush Hogs," donned a cowboy hat and spoke of his congregation's role as missionaries in west Jackson.

"We are Rosemont Missionary Baptist Church. Mission means we go out into the community, and that's where the work is," Edwards told the Jackson Free Press. "We come to Rosemont to worship, but we leave there to serve."

Nationwide, the community land trust model has been adopted as a seemingly fair way to develop struggling neighborhoods. Community land trusts operate through a nonprofit, in this case Rosemont Human Services, Inc., which purchases land in communities to preserve affordability while encouraging land ownership and neighborhood stability. Stacey Donaldson, the director of the Rosemont Community Land Trust, is excited about this process.

"It keeps the lands in the community where it doesn't get sold to outside entities and outside corporations and they can go and do gentrification," Donaldson told the Jackson Free Press.

"Basically it keeps those big companies from coming in and freshening up the companies and the land, making it unaffordable for low-income families," she added. She says that so far the Rosemont CLT has purchased homes in the Jayne Avenue area for the purpose of rehabilitating those homes or tearing them down to rebuild and later sold for fair prices to locals.

Mayor Chokwe Antar Lumumba talked recently about his interest in applying for Mississippi Home Corporation's Blight Elimination Program. MHC's vice president of federal grants, Lisa Coleman, told the Jackson Free Press that she does not have an application from the City to date. The only grant that has been approved in the state is the City of Columbus, Miss.

The BEP just became available to Mississippi cities in May of this year, Coleman said, with $20 million available that has to be spent by 2020 or they go back to the Treasury. Cities can apply for $500,000 at a time and up to $4 million total.

Coleman also made it clear that this program is not a cure-all for blight, but more ideal for neighborhoods with just a few blighted homes on a street bringing down property value.

She hopes that other cities will rush to apply once they see demolitions happening in Columbus.

"We're hoping now that Columbus has been approved, once they've done some demolishing, other cities can see that it works. We really want to emphasize that this is a short-term program."