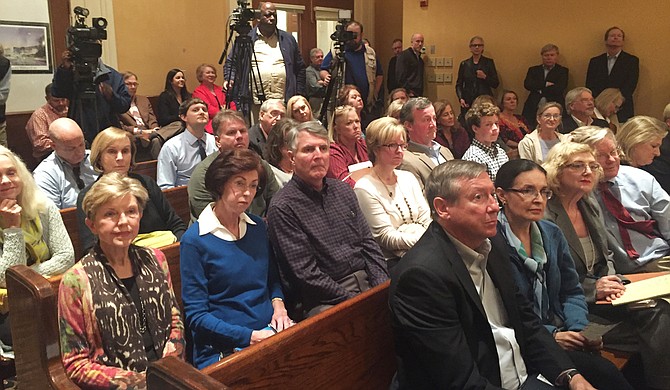 Crowds of neighborhood gate supporters crowded into City Hall chambers multiple times in the last year and a half, including for this November 2016 Council meeting. They finally won the right to install gates nearly a year later. Tim Summers Jr./File Photo

JACKSON — Shortly after five of the seven Jackson City Council members approved a gating ordinance on Sept. 12 that had haunted the body for more than a year, the City Hall chamber filled with resounding claps lasting at least a minute. Supporters of gates had pushed for final permission to install what Ward 1 Councilman Ashby Foote calls "stop sign(s) that can't be run" since an initial ordinance in May 2016 stalled due to pushback from neighbors who worry that they are divisive, unsightly, a barrier for emergency vehicles and could hurt property values.

During the Rules Committee meeting on Sept. 7, Foote and Ward 6 Councilman Aaron Banks announced that the ordinance they supported does not guarantee the installation of gates, but instead provides an application process. Applicants would be financially responsible for the planning, installation and maintenance of the public-access gates, which many believe will provide more security, while others worry they may slow down emergency vehicles into the neighborhoods.

Under the ordinance, the City's Department of Planning would regulate all applications for permits to install gates. Interested neighborhood associations must obtain a petition reflecting at least 75 percent of the property owners in the proposed area to be gated. This does not guarantee approval, however.

Ward 3 Councilman Kenneth Stokes, who voted against the gates multiple times, said at the Sept. 12 council meeting that the barriers to entry will divide citizens.

"I hate that this item has brought such a division to a part of Jackson that we really need to be united," Stokes said. "But somewhere down the line, we got to listen to the minority. And if the minority is saying we shouldn't have gates, just because you outnumber them doesn't make it right."

"What we needed to do for the gating ordinance, from the one that was originally passed in May 2016, we had to make sure to put in paragraphs that would guarantee due process for all the constituents," Foote told the Jackson Free Press this week.

Foote said that opposing residents in a neighborhood applying for gates will have the opportunity to express concerns to the council body before approval. "We want to make sure that everybody got their chance to make their case for why a gate should be authorized or not authorized," Foote added.

Neighborhoods must also install a sign at the gate that specifically states "push button for access." The sign is to ensure that citizens understand that everyone has access into the gated area, unlike a private gated community. The idea, Foote said, is to slow down traffic, not shut people out.

Under the ordinance, applicants are required to obtain a "policy of liability insurance" that is worth no less than $1 million, as a means to "protect the interests of the City."

While Jacksonians favoring gates celebrated their win, Ward 4 Councilman De'Keither Stamps, who voted against the ordinance, shifted the focus toward Jackson Public Schools and the impending State takeover of the district.

"The biggest gate we have in our City is our school district. It provides the proper fence for our young people," Stamps said. "It either produces criminals, or it produces productive citizens who stop at stop signs and respect civic duty."

In the past, Jacksonians in favor of installing gates in neighborhoods argued that drivers speed through neighborhoods, ignore stop signs and endanger children.

Foote, Banks and Ward 7 Councilwoman Virgi Lindsay reviewed a draft of the ordinance during a rules committee meeting before presenting it to the full council on Sept. 12. All members of the council body were present at the Sept. 12 meeting. Stokes and Stamps were the only "no" votes with all other members supporting the ordinance. It takes effect Oct. 12.