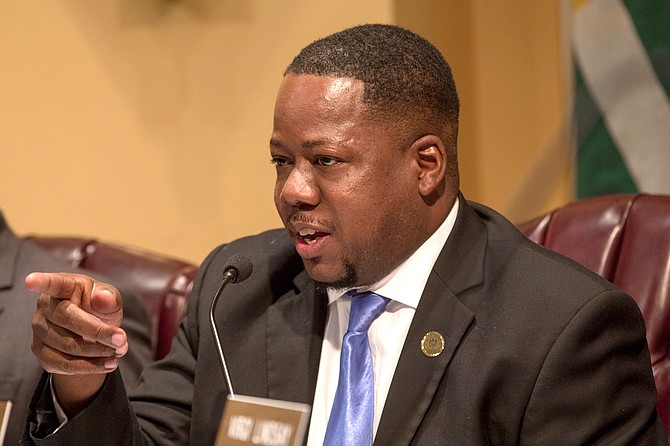 Ward 6 Councilman Aaron Banks is the chairman of the Rules Committee. He presided over a Sept. 5 special meeting to discuss the controversial gating ordinance. Photo by Imani Khayyam.

JACKSON — For more than a year, a proposed gating ordinance has sparked controversy from both Jacksonians who are in favor of neighborhood gates for security reasons and those who reject the gates as unneeded and unsightly, each time resulting in the Jackson City Council revising the proposed language.

In the past, Jacksonians wanting gates argued that their neighborhoods are unsafe for children due to speeding vehicles. These same residents say that the gates will help keep criminals out of their communities, even as opponents warn that they can delay fire and police access for emergencies.

Opponents of gates also argue they are an eyesore that could hurt property values, and will cause segregation in the city. They also do not want to be forced into unwanted gates even if a majority in their area votes to erect them.

Ward 1 Councilman Ashby Foote read a draft ordinance aloud during the rules committee meeting that the council would not give out saying it was not final. In one of the sections, it mentions a need for cameras, which Foote favors.

"The primary motive for me, at least one of the primary motives in pursuing the gating regulation like this for public-access gates, is a lot of it is all about the deployment of cameras," Foote said during the special meeting.

Foote joined Ward 7 Councilwoman Virgi Lindsay and Ward 6 Councilman Aaron Banks, who is also the rules committee chairman, in the City Hall council chambers to review the ordinance before it goes before the full council body on Tuesday, Sept. 12.

The Ward 1 councilman argued that officers' body cameras and gates equipped with cameras help catch suspects in most situations. In the ordinance it states that neighborhoods with gates installed must have police regulation.

"And so, one of the main benefits I think from deploying more public-access gates, which include video cameras, is the productivity it brings to the police department," Foote said. "It makes them more effective at doing their job. It makes their job a little more easier at trying to track down the bad guys."

Lindsay pushed back on the need for safety. She encouraged residents interested in gates to find other options to prevent crime, enhancing their community and lowering speeding in neighborhoods. She mentioned that the council determined that street-scaping and traffic-calming methods are better solutions.

"Gates are not always the answer. They just simply aren't," Lindsay said.

The ordinance would apply to any residential street in Jackson in which the homeowner's organization, or other approved applicant, agrees to install and maintain the gate.

Foote and Banks announced a disclaimer to the crowd.

Under the ordinance, the Department of Planning would regulate all applications for permits to install gates. Neighborhood associations interested in installing gates must obtain a petition reflecting at least 75 percent of the property owners in the proposed area to be gated. This does not guarantee approval, however.

Applicants would be financially responsible for the planning, installation and maintenance of the public-access gates. This includes repairs and replacements as well.

Banks reiterated the intentions of the resolution to the small crowd in City Hall.

"I want to be very clear. This does not mean that the City is in the business of putting up gates. But this does ensure that if there's someone that desires—if there is an association and 75 percent of that association in that community desires—to have gating for safety reasons, then it ensures an application process," Banks said. "We have to trust our planning department to begin to operate within the scope of what makes that work."

Following Banks, Lindsay of Ward 7 said that even if a neighborhood gets 90 percent of a petition signed, that neighborhood is not guaranteed approval for a gate.

"This has been a really difficult process, and what I've come to the conclusion on is that we simply cannot legislate all of the needs of everybody in a gating ordinance," she said.

The council did not make the draft ordinance available to the public following the meeting and still did not share the language when reached the following Thursday. The council will be vote on the ordinance at next week's meeting at 10 a.m. on Sept. 12.