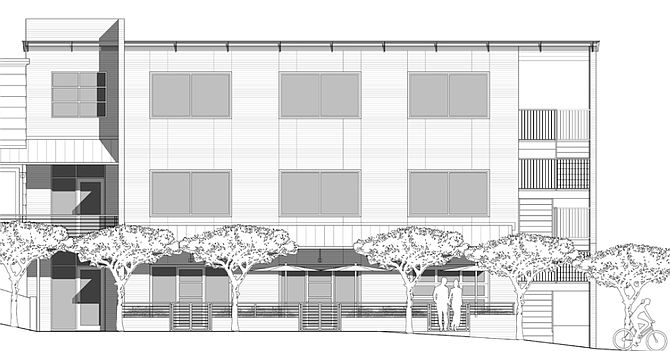 This is a partial rendering of The Precinct Fondren development at North State Street and Patton Avenue. The Jackson Planning Board rejected a patio variance for the building, which is expected to be filled with commercial development. This drawing indicates a patio on the front side. See full rendering at precinctfondren.com.

JACKSON — A group of Fondren residents walked out of the downtown Hood Building relieved on Wednesday after the City of Jackson planning board rejected a request for a "front yard" variance to allow the construction of a patio addition to The Precinct Fondren, a new 8,000-square-feet development in the site of the old police headquarters for the fourth precinct. Developers plan to lease one or more commercial and retail lofts in the building at 3304 North State St., at Patton Avenue.

A variance is a request to deviate from current zoning requirements. If granted, it serves as a waiver and permits the owner to use the land in a way that the zoning ordinance does not normally permit.

Michael "Mickey" Paduda III, a Jackson investor and developer, requested that the planning board approve the variance to build the patio on the North State Street side of the building. "The reason for that is the fact that State Street is a commercial-type street. The traffic is such that you already have the noise that is out front on State Street, and it's become less and less residential over the years," Paduda told the board.

Neighbors concerned about the project believes the opposite, however. A main concern is that people visiting the lofts would be intoxicated and forced to park on Patton Street, ultimately disrupting residents and possibly causing harm to children.

Last year, a rowdy and short-lived bar at the same intersection upset neighbors who said customers parked on the street and made excessive noise. Dumpsters were also placed incorrectly, they said, endangering the quality of life in the residential neighborhood just north of "downtown" Fondren.

The mayor appoints the 15-member planning board, which is the advisory committee for zoning matters. Board members Jimmie Robinson of Ward 7 and Vice Chairman Samuel Mitchell of Ward 2 voted to approve Paduda's request.

The remainder of the board, including Chairman Michael Booker of Ward 2, Christopher Myers of Ward 7 and Cassandra Welchlin of Ward 5, voted against it.

It is rumored that Green Ghost Tacos will re-open in The Precinct Fondren in January 2018. The restaurant had to close on Sunday, Sept. 10, in its home of the last year in the old Que Sera Sera location, with a patio that had routinely won Best of Jackson awards for many years. The Heritage Hospitality Group plans to demolish that building following several buildings it leveled on State Street over the last week to clear two acres for its Homewood Suites Hilton hotel, which has proved controversial among many Fondren residents. Cesar Torres, co-owner of Green Ghost Tacos along with his mother, Yolanda Coronado, and his brother, Oswaldo Sanchez, opened the restaurant in 2016. A post on the restaurant's Facebook page stated that it plans to relocate in Fondren by January 2018. The other Green Ghost location (1290 E. County Line Road, Ridgeland) will remain open.

A Fondren promotional blog posted that Paduda, a Belhaven resident, is now leasing four to five commercial and retails "lofts" inside The Precinct Fondren and is willing to build it out for one or more commercial tenants, depending on needs.