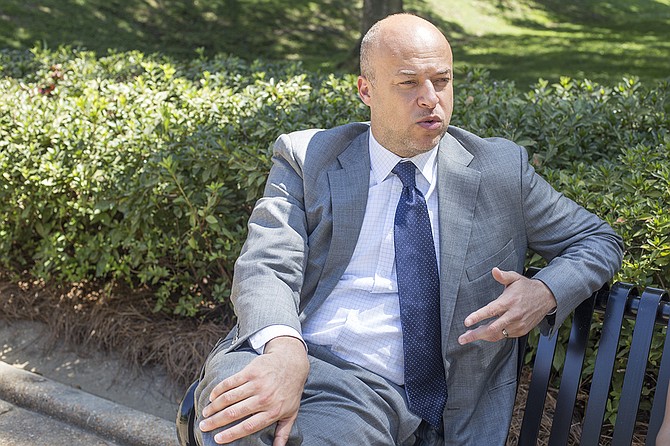 Charles Hatcher, the city director of administration, said the biggest change to the city’s 2016-2017 budget is a $1-million transfer to the parks and recreation department to help fund landscaping responsibilities. Photo by Imani Khayyam.

JACKSON — The City of Jackson has a new director of public works to deal with ongoing infrastructure issues, including always-present potholes.

"My beliefs are based on ... I serve the Lord by serving his people. And I serve the people by providing high-quality and reliable and affordable public services," Miller told the council members.

The council questioned Miller about his abilities and approach towards solving issues such as potholes, public works equipment, customer service, deploying money to improve the streets and infrastructure in a timely manner, and building relationships with the state and businesses.

"I hope that you will have trouble finding me in my office. Because my belief is that public works is a contact sport," Miller responded.

"You've got to get out in the community, (and) you've got to be talking to the citizens, the developers, the contractors (and) the funding entities."

Miller, whom Mayor Chokwe A. Lumumba appointed, is expected to arrive to begin his job here by mid-October. Jerriot Smash is the interim director of public works until Miller arrives.

The council vote 5-1 to approve Miller with Ward 3 Councilman Kenneth Stokes voting against him. Council President Charles Tillman participated via video chat but was unable to vote due to service being disconnected.

The council also confirmed Ison Harris as director of parks and recreation and reappointed James Henley and Lawanda Harris to the Jackson Municipal Airport Authority board. Henley is the board chairman, and Harris is a past chairwoman of the board.

The Jackson City Council has transferred an additional $1,339,059 in general funds to the Department of Parks and Recreation due to fiscal-year 2016-2017 budget shortfalls

On Sept. 28, a special city council meeting convened to revise the 2016-2017 budget to assist the parks department, which has struggled with its landscaping responsibilities after exhausting its 2016-2017 budget.

"They just needed more than we thought they needed," Charles Hatcher, director of administration, told the Jackson Free Press this week. "At the end of every quarter, my department has to tell city council how the budget has been revised to reflect changes. Because the budget is just a plan ...," he added.

The Jackson City Council approved a 2-mill increase in property taxes last month, which will go into effect in February. The increase, which will impact renters more than homeowners that can qualify for tax exemptions through the state, will generate $2.3 million. The new administration will also freeze all vacant positions to save approximately $700,000.

The tax increase is a part of the city's new budget, which began on Oct. 1.