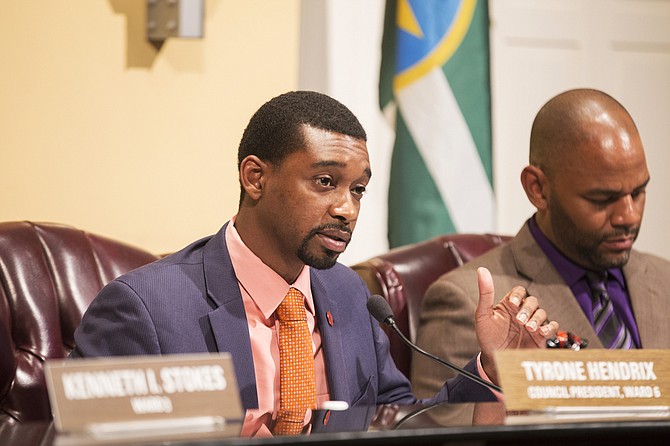 Jackson City Council President Tyrone Hendrix took the brunt of the ire from residents of the Villages of Northpointe on April 18, who want gates installed. Photo by Imani Khayyam.

JACKSON — Distressed residents from the Villages of Northpointe in far northeast Jackson gathered at the Jackson City Council meeting on April 18 to address Councilman President Tyrone Hendrix on his lack of support for a gating ordinance that has dawdled for about a year due to concerns ranging from neighborhood unfairness, to safety challenges, to charges of "intentional segregation."

"Last spring the gating ordinance was passed by the Rules Committee unanimously, y'all all know that," Northpointe resident Lynn Coleman told the council. "It was also passed by the full council unanimously, and so I'm just trying to figure out what happened."

Part of what happened is that residents inside the would-be gated communities, such as Woodland Hills near Fondren, could not all agree on the virtues of gating some city streets and not others, including within established neighborhoods. Carl Menist of Woodland Hills spoke against gating at a Nov. 14, 2016, public hearing, saying that they could lower the property value of his home and bring a negative, dangerous feel to his charming neighborhood, which already has low crime.

Gates might "turn off" younger families, Menist warned. "[T]hey like it the way it is," he said, adding, "It's a lot better than it was a few years ago."

Mayor Tony Yarber had asked the city council then to repeal the ordinance presented by Ward 1 Councilman Ashby Foote and rework language to try to address concerns. That led to the Nov. 14 hearing.

Part of the controversy is that only parts of neighborhoods could end up with gates that many consider unattractive, a barrier to public-safety vehicles and a way to segregate their communities—after only those who would live behind the gates get the chance to vote on them.

Coleman of Northpointe pushed back on the segregation point: "Mr. Hendrix, you are here. At that rules committee meeting we learned that you now see gates as a form of segregation. Quite frankly that offended me. The Villages of Northpointe is a very diverse neighborhood. ... I would invite you to come to Northpointe any time, but I would like for you to come on a Saturday night, down Northpointe Parkway or Waterford Drive, and you would learn why we want gates. ... We're not trying to keep anybody out."

The Villages of Northpointe is across Old Canton Road from the County Club of Jackson, spreading north to County Line Road; homes list from $68,000 to $549,000, with many selling for more than $200,000. The racial demographic breakdown is not clear.

Coleman then targeted Councilman De'Keither Stamps. "Mr. Stamps, you know I can't forget you," she said, chuckling at him. "In December 2015, you were quoted in the Northside Sun referring to Northgates, Northlake wanting gates: 'If the neighborhood wants something, and they'll be responsible for maintaining it, I support them on that endeavor.' ... We want to be responsible for it, the City's making us responsible for it, and we are dedicated to taking that on as a neighborhood."

Coleman said Northpointe's homeowners' association would be liable and responsible for damages gates caused vehicles as well as gate maintenance and repairs.

The next Northpointe resident, Swinney Sumrall, said children are at risk with no gates present. She shared that her children are now adults.

"Y'all have heard me say this before," Sumrall told the council. "I can move tomorrow if I wanted to. I love Jackson, I don't want to move, but I want it to be safe for the people that I represent in my neighborhood. Kids can't go out and ride their bikes. It is super dangerous."

Dr. E. J. Blakely, an expert on urban planning and specifically neighborhood gating at the University of California-Berkeley, studies the effects of what is called "intentional segregation" in urban-planning circles. "The ambiguous and spotty successes and failures of gates and barricades as measures to control crime indicate that although people may feel safer, they probably are not significantly safer," Blakely wrote in 1998. "Thus, fear and anxiety feed on themselves. Gates and walls reflect fear and serve as daily reminders of the perceived dangers on the other side at the same time they do little to improve the reality."

Amy Kraus, who has lived in upscale Woodland Hills since 1968, warned council last fall that gates can just push crime to areas outside the barriers. "It's not slowing down crime for everyone else until we take some other measures," she said then.

Kraus said gates divide and exclude people who already live in a neighborhood if gates are allowed in just parts of them. "It's really hard to hear that you can put a gate up in the middle of the street that actually goes right up to our home," she said.

Lisa Nettles addressed council on April 18, calling for action on allowing gates on public streets—blaming a shoddy process. "In May of 2016, this council sitting before us passed a gating ordinance. Many of us spent many days pounding the pavement, gathering the items necessary to complete this ordinance only to be told that when we applied that you were not accepting applications," she said, exhaling deeply.

"At a committee meeting held earlier in the month of March, Councilman Ashby Foote was publicly chastised because he had not turned in his changes to the ordinance on a Friday before the meeting on Monday. Yet last Monday, we walked in to this meeting and were handed changes as we walked into the meeting."

Nettles also confronted Hendrix, who is soon leaving council: "You spoke and said that those who wanted gates were under the illusion that gates would provide us with safety. No sir, we understand that while we live in the city of Jackson, none of us are going to be 100 percent safe."

Although Nettles had reached her time limit, she refused to leave the podium before reiterating her point. "I ask you to carefully consider when voting for this gating ordinance the time and the effort that we have put into this," she said.

"Many of my views haven't changed since the Rules Committee meeting," Hendrix said. "I can be for the gating ordinance under certain conditions. One in which I don't believe that a gate should be put in the middle of a neighborhood. I think that's common sense for me ... when we write ordinances we are writing them for the entire city of Jackson ... so if we allow it one neighborhood that means we also have to allow it another neighborhood."

The ordinance's future is uncertain, pending a compromise. "We thought we had an agreement when we did the original revision to the gating ordinance, only to have the administration say we don't agree to doing it this way after people have already spent a bunch of time and money trying to comply with the revised ordinance," Ward 1 Councilman Melvin Priester said.

This story includes reporting on earlier council meetings by Tim Summers Jr. Read a 2011 story about a gate controversy in northeast Jackson.