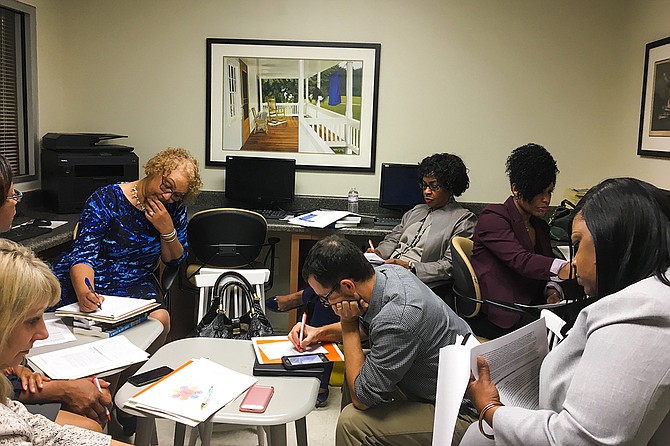 "Better Together" Commission members responsible for drafting the request-for-proposal for an independent contractor crowded into the computer lab in the Lincoln Gardens Community Center. Photo by Arielle Dreher.

JACKSON — The Lincoln Gardens apartment complex ran out of parking fast on Thursday night. The "Better Together" commission to analyze the needs of Jackson's public schools held its second meeting in the Lincoln Gardens community center, off Medgar Evers Drive in northwest Jackson, which filled to standing-room only. The commission split into its two working groups: one to brainstorm community engagement, the other to hammer out details on writing the request-for-proposal to find a contractor to conduct an in-depth analysis of Jackson Public Schools.

The RFP group crowded into the computer lab of the apartment complex with three reporters. Claiborne Barksdale and Robyn Rosenthal, a communications manager with the W.K. Kellogg Foundation, joined on speakerphone as the group hammered out their timelines for the request-for-proposal.

The RFP should be final by Nov. 30, when the commission meets again, and groups can submit applications through December. The January timeline still needs to be finalized, but the group ideally wants to have a contractor to complete the study in place by January 2018.

"The work lies with casting the broad net on getting it out there—that's where it lies. If the net is not broad enough cast ..., then we fail," Yumeka Rushing, program manager with the W.K. Kellogg Foundation, said.

While the RFP group huddled in the computer lab, the community center came alive with engagement from everyone in attendance. The other commissioners, working on engagement strategies, huddled and brainstormed ways to solicit as much community input as possible for the study.

Advocates, Jacksonians and JPS parents at the meeting also split into two groups and discussed what community engagement looks like and how Jacksonians would respond best to surveys and door-to-door canvassing.

Pam Shaw, a community advocate speaking for her group, said people need to be engaged in expansive and inclusive ways.

"It is important ... that you use multiple ways of getting information out so that it touches lots of folk, so it's not just an email, it's not just Facebook," she said. "It is creating a space where people feel welcome, and if they feel welcome, they will participate and engage."

"We don't want to be just another committee that's just here that's a talking head and yet again continue to do the same ole same ole," she said.

Grigsby said the commission wants to poll parents as well as students from fourth to 12th grades. Additionally, Rushing said the W.K. Kellogg Foundation is interested in creating a separate student engagement piece of the process, where student leaders can solicit feedback from their peers.

The foundation has hired a polling firm based in New Orleans to begin conducting polls in the city through the end of 2017. The polls will help inform the on-the-ground canvassing efforts scheduled to follow the polling. Jacksonians interested in submitting feedback or those that have questions can send them to [email protected] until the website is launched in the next few weeks. The next meeting will be Thursday, Nov. 30, at Bailey APAC Middle School at 4:30 p.m.

Read more about the third option takeover of Jackson Public Schools at jacksonfreepress.com/jpstakeover. Email state reporter at [email protected] and follow her on Twitter @arielle_amara.