JPS Better Together Commission Will Secure Contractor This Month 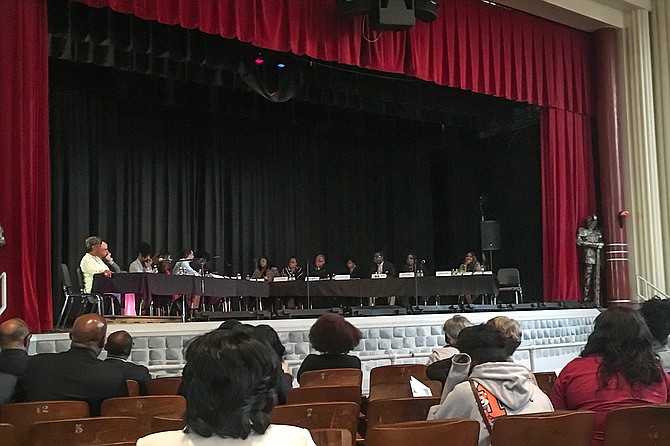 The Better Together Commission met on Nov. 30 and set final deadlines to issue the request-for-proposal for a third-party contractor to conduct a 10-month study of the Jackson Public School District. Photo by Arielle Dreher.

JACKSON — The Better Together Commission will issue a request for proposal today in its search for an independent contractor to study Jackson Public Schools for about 10 months in 2018.

At the commission's Nov. 30 meeting, the group worked to finalize the details of the RFP. Claiborne Barksdale, who called into the meeting, explained the timeline. Groups interested in conducting the needs analysis of JPS will have 25 days to respond to the RFP. Requests are due by Dec. 29 to the commission. Barksdale said he hoped to get at least 20 respondents.

"We would then narrow that down to the top five or six using a rubric that will be developed," he said Nov. 30. "And then between January 8 and January 12, we would interview the finalists ... in person in Jackson."

The commission will pick the contractor in January, and the group would begin its work in February 2018 and finish around November of the same year.

Ed Sivak, who is a member of both the Better Together Commission and the JPS Board of Trustees, asked to make some changes to the draft RFP. The changes, he said, were to make the document more "student-centered," changing some of the language and moving around a few sections. The commission voted to approve the RFP, with changes that Sivak suggested, and send it out by today. 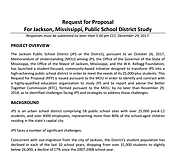 "We want to cast a wide net here, so let me know of any entity that's qualified, and we'll get it to them on Monday," Barksdale said.

Yumeka Rushing, a program officer with the W.K. Kellogg Foundation in Jackson, said community members who know of organizations that should apply could email [email protected] with suggestions.

JPS administrators addressed the commission last week along with representatives from Mayor Chokwe Lumumba's education transition team and Working Together Jackson. WTJ began conducting listening sessions about JPS earlier this year, and it shared the results of its survey with the commission.

In 11 venues, 481 institutional leaders (primarily from local nonprofits and religious organizations that are WTJ members) met in small groups to discuss their vision for the district and what they expect from JPS administrators as well as how the community can work with the district to help rebuild JPS.

Respondents emphasized the importance of place-based schools, or returning power to schools instead of retaining it in the central office.

"This is not rocket science. Good principals and good teachers are the essential ingredient to good schools," one respondent said.

Perry Perkins and Mary Jackson, both WTJ members, presented the survey results. They said local autonomy was a consistent theme throughout their discussions. Respondents also said there is a need for respectful, supportive environments for teachers and staff members as well as student-centeredness in schools.