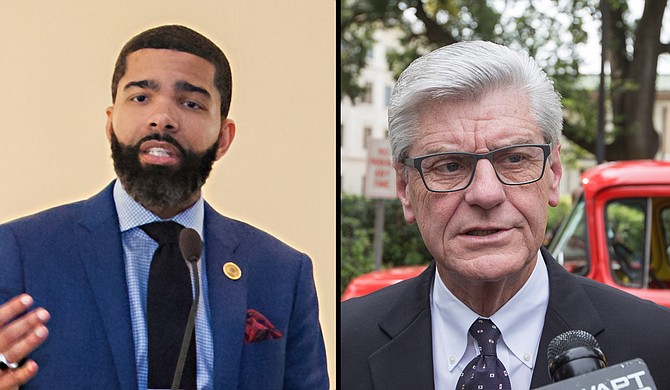 Mayor Chokwe Antar Lumumba and Gov. Phil Bryant announced the 15-member Better Together Commission, which will control the hiring of a contractor, community listening sessions and completing a study of Jackson Public Schools. Photo by Stephen WIlson and Imani Khayyam

JACKSON — Gov. Phil Bryant and Mayor Chokwe A. Lumumba, in coordination with the W.K. Kellogg Foundation, announced who would sit on the 15-member Better Together Commission today.

The commission is a result of the governor's reluctance to sign the state takeover resolution that the Mississippi Board of Education passed. Instead, Bryant wanted to opt for a different third way.

The 15 commissioners represent a broad swath of the Jackson community and state as whole and include city officials, faith leaders, business owners, philanthropists, parents and teachers.

"I believe that a strong educational system is the basis of an economic model based on human dignity. I am deeply appreciative of these Commissioners sharing their skills to better our community. As we work together to build a bold new vision of our city, let us start where it matters most - the future of our children," Lumumba said in a press release. 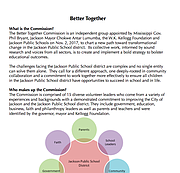 The commission is an independent group now tasked with hiring a contractor to work on a full gap analysis study of JPS. Their first meeting is Wednesday, Nov. 8, at 10 a.m. at the Mississippi Museum of Art. The meeting is open to the public.

"I am grateful for these individuals' willingness to serve, and for their commitment to bring transformational change to Jackson Public Schools. I look forward to the Commission beginning work as we move toward becoming Better Together," Bryant said in a press release.

The 15 Commission members are:

-Ivye L. Allen, President of Foundation for the Mid South

-Robert Blaine, CAO of the city of Jackson

-Charles McClelland, current board member of Mississippi Board of Education

Read more about JPS at jacksonfreepress.com/jpstakeover.