JPS Commission Gets to Work 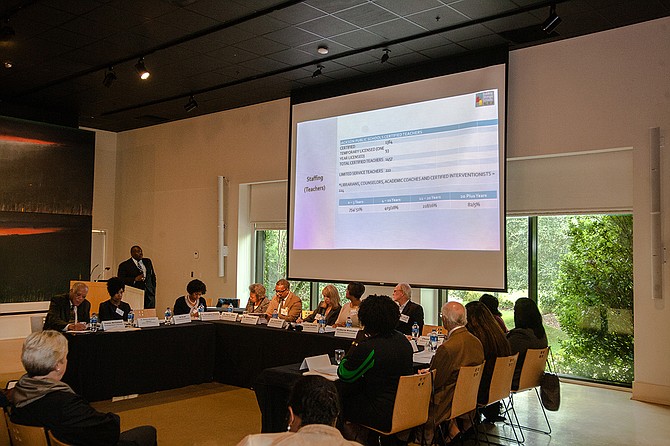 All but one commissioner met Wednesday, Nov. 8, to discuss how the “Better Together Coalition” will work to solicit feedback from the Jackson community and hire a company to conduct an in-depth study on Jackson Public Schools. Photo by Stephen Wilson

JACKSON — More than 50 Jacksonians filled the Mississippi Museum of Art lobby on Nov. 8, eager to hear what the newly formed "Better Together" commission would do for Jackson Public Schools. The coalition of stakeholders represents the curve ball Gov. Phil Bryant pitched instead of opting for the state education department to take over Mississippi's second-largest school district. Unlike most government meetings, however, after the "Better Together" commission members each said their names and what they do to kick off the gathering, they had every person attending the meeting introduce themselves, too.

Before the commission got far in its business, Claiborne Barksdale, the former CEO of the Barksdale Reading Institute, suggested adding structure to the large coalition. In what felt premeditated, Barksdale nominated Charles McClelland, who also serves on the Mississippi Board of Education, and Ivye Allen, the president of the Foundation for the Mid South, as co-chairs of the commission. The rest of the commission members voted to approve them.

The commission plans to split into two "action tables" to complete their work. One will address the business side of the mission, issuing a request-for-proposal to conduct an independent gap analysis study of JPS. The other group will address the community-engagement piece through surveys and listening sessions to determine and shape the Jackson community's vision for its public schools.

"We had a lot of funders reach out to all of our offices about wanting to help. ... This will help leverage exactly where the funding needs to go—what we find in the outside evaluation and the community engagement pieces," Laurie Smith, the governor's adviser on education and workforce development policy, said.

The W.K. Kellogg Foundation, one of the four entities on the memorandum of understanding that formed the commission, is funding the coalition's work as well as the contract for the group that conducts the study. Additionally, Yumeka Rushing, a Jackson-based program officer at the foundation, said her group is considering providing mini-grants to neighborhood groups to expand conversations communities are already having about education.

For now, the commission will meet weekly to get the request-for-proposal out soon to find a company and start the study. "The RFP group is really going to need to dig in (because) that needs to go out as soon as possible," Smith said.

Commission members did not sign up for specific "action tables" on Wednesday, but Smith said they can choose through email before the next meeting.

Dr. Freddrick Murray, interim superintendent of JPS, gave the commission an overview of the district at the meeting. More than half the schools in the district received an "F" grade from the state this year, and the district received its second "F" in a row. However, the district's academic challenges are coupled with socioeconomic ones. Ninety-nine percent of students in the district are eligible for free and reduced lunch, and more than 4,000 students are homeless. Upwards of 3,000 students live in "shared residences," meaning kids living with parents that do not have a home or apartment and are currently living with someone else.

Murray said more than half of the district's teachers are in their first three years of teaching. "It was very evident that we needed to improve our teacher corps," he said. Murray says several teachers in exit interviews said they did not feel equipped to support their students, which fueled Murray's curriculum department move.

JPS is in the midst of completing a corrective action plan, which was supposed to address what MDE found in the limited audit of the district at the start of this year. The district must submit another CAP to MDE by Jan. 16, 2018, after the state board voted to put the district back on probation this fall. In February, the new CAP will go to the state board for approval and then must be complete by July 31, 2018.

Robyn Rosenthal, communications manager with the Kellogg Foundation, emphasized that while similar work has been done in Michigan, Jackson is different. She said surveys and canvassing are good starts to getting public input.

"The most successful work and the most successful energy and change have really happened when the community has stopped and come together to identify their values and their vision, and everyone has had the opportunity to weigh in on that," she told the commission on Nov. 8.

The commission meets again Thursday, Nov. 16, location to be announced.