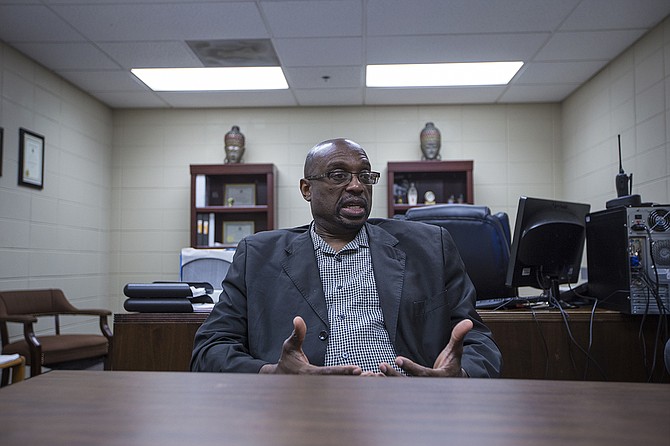 Federal court monitor Leonard Dixon completed his tenth monitor’s report on the Henley-Young detention center this year. On a recent visit, Dixon said the facility has made great progress, especially in lowering the number of children housed inside its walls. It’s also offering more services. Photo by Imani Khayyam.

JACKSON — About 10 minors, dressed in different solid-colored uniforms, sat interspersed with security staff members as one member reads out bingo combinations. No one seemed to be having a lucky afternoon. The multi-purpose room in the Henley-Young Juvenile Justice Center is used for assemblies, training, orientation and, today, bingo during recreational time.

Eddie Burnside, the director of operations at Henley-Young, Hinds County's juvenile detention center, says he wants his staff to have relationships with the young people, so it is not just a security guard-vs.-kids approach.

Burnside the one who had the interior of the center painted something other than the gray and one-shade-darker-gray combination it used to be.

Henley-Young has come a long way since the federal judge issued a consent decree and settlement agreement back in 2012, which required the county to cut back on the number of incarcerated kids and increase mental, health and rehabilitative services for youth.

The consent decree requires the facility to have a capacity of no more than 32 kids and keep them for a maximum of 21 days at a time. As of this summer, the average number of kids at Henley-Young hovers between 15 and 20, Executive Director Johnnie McDaniels said.

Johnnie McDaniels, the executive director of Henley-Young Juvenile Justice Center, says it is up to the community and various stakeholders to come up with solutions and programs for youth when they leave his custody.

Why? McDaniels says the consent decree had a type of snowball effect on most parties involved in juvenile justice in the county, from the court to his staff.

"People (now) know Henley-Young is not this long-term facility where children are going to be without services," he told the Jackson Free Press. "So the court, I think for reasons that's clear to me and some that's not so clear, began to recognize that this is not that type of facility, so when we were able to identify and limit those children (coming in) ... plus having services in place."

Henley-Young now has two mental-health workers and three case managers hired full-time to care for the kids that come into the center. Computers are in the intake room so children can take their initial mental-health screening tests.

Federal court monitor Leonard Dixon, who just finished up a visit at the center, says the drop in number of intakes is an "outstanding accomplishment" for the facility, noting that some facilities he has worked in and monitored take up to 20 years to bring their numbers down that drastically.

Previously, Henley-Young could hold from 70 to 80 minors at a time. 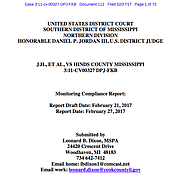 Dixon's most recent report, from February 2017, shows the detention facility's progress. The first report found 71 measures for improvement that were "non-compliant." Today, that number has dropped to 13.

McDaniels says his immediate need is a leader of that five-person mental-health care staff: a clinical psychologist. He suspects this has to do more with the availability of psychologists in Mississippi and competitive pay. For now, the contracted medical group provides a psychiatrist to Henley-Young once or twice a week, while McDaniels continues to push the Hinds County Board of Supervisors to look for a psychologist.

"What you will find with a lot of children who end up in the juvenile justice system is that there has been trauma somewhere, and having this staff that can sufficiently identify, diagnose and begin to kind of individualize treatment programming (for each kid) is something that was emphasized in every report the monitor did," McDaniels said.

Medical care has improved under Dixon's guidance, too. Ngozi Ezike submitted medical reports to the court in December, and based on interviews with Henley-Young administrators, the juvenile detention center has improved its medical practices six months later. 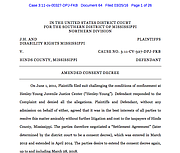 Ezike wrote in December about a girl who had been to Henley-Young County Juvenile Justice Center eight times in the past three and a half years—and she is diagnosed with a sexually transmitted infection almost every time she arrives. The girl, called Youth #2 in the most recent medical-services review of the facility, told Ezike that the doctor "comes now and again but haven't seen in a long time."

It also appears that no one ever told her the results of her STI test. Ezike's report suggests the facility prioritize STI testing and treatment for youth admitted to the facility.

Burnside said Henley-Young has remedied this problem. All young people, both boys and girls, are tested for STIs when they enter the facility. If they leave before their test results come back, Burnside said he will contact the parent or guardian and, respecting privacy, tell them the results. If a juvenile is still at Henley-Young when the results come back, he or she is taken off-site and receives treatment for free at Crossroads Clinic in the Jackson Medical Mall, Ezike's report notes. Youth get individualized treatment assessments and plans for physical and mental health at Henley-Young now, McDaniels said, and case managers share that information with the youth's guardian before they leave.

Ezike suggests that Henley-Young keep single dose treatments for gonorrhea and chlamydia to avoid treatment delays. Youth are treated at Crossroads if they have an STI. Ezike also wants Henley-Young staff to follow up with young people even if they leave before test results come in.

Henley-Young does not test for HIV currently, either, and Ezike's report suggests the center begin administering testing for all adolescents entering the facility. The juvenile justice center can apply for grants through the federal Centers for Disease and Control or get help from local nonprofits.

'Where the Tension Is'

Keeping numbers low and turning kids out after 21 days while offering rehabilitative care will continue to be a focus for McDaniels and his team, but the executive director says the whole system of care needs to continue to improve and evolve.

Dixon, the court monitor, compares Henley-Young to an emergency room.

"The detention center is the emergency room of the juvenile justice system: you bring kids in; you triage them; you deal with them, and then you send them to wherever they need to go," Dixon told the Jackson Free Press. 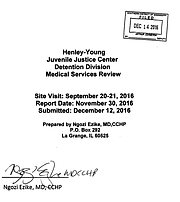 "And if you get that into your head, then you can get an understanding of where the tension is. Before I think people were putting kids in here as a respite, or we don't want to deal with them, or he cursed his mother, so the mother calls the police. Well, that's a different situation; you're going to spend all this money to lock him up when it would have been cheaper for you to have a counselor go to the house and see what's going on."

Of course, in order for the ER metaphor to work, the community services need to be in place for young people who exit Henley-Young. McDaniels says to get movement outside Henley-Young for services it will take effort by all stakeholders: the courts, law enforcement, community members and the juvenile and criminal justice systems.

"It has to be all of the parties and all of the stakeholders, elected officials, and everybody saying, 'look, these are the challenges that we face in our criminal justice system,' and hopefully with that kind of collective shout, we can get some movement," he said.

Dixon said one of the important aspects of keeping Henley-Young on track is to keep the increased funding for staff, which the consent decree requires. He said many centers that he has monitored do not keep the supports and lose traction after they are out from under the decree. McDaniels is hopeful that Hinds County can start to address the holistic approach to caring for its people through mental-health care and programs. McDaniels quoted Frederick Douglass from the 1800s: "It's easier to build strong children than to repair broken men."