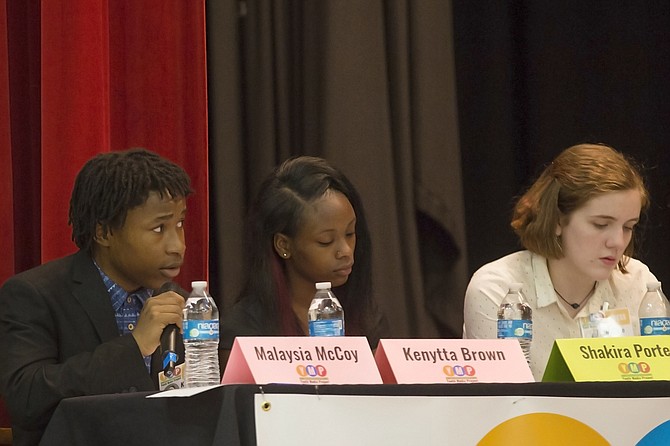 JACKSON — In about 20 years, "our roads and our sidewalks will be in a worst state than they are before we repair them," attorney Chokwe Antar Lumumba said while responding to sophomore Maggie Jefferis of Murrah High School. She had just asked mayoral candidates a question about children playing in Jackson streets because many capital-city neighborhoods still do not have sidewalks.

Lumumba continued, emphasizing that topics like sidewalks for young people are as important as potholes are for many adults. "By leveraging those funds (1 percent sales tax) we get more money upfront and are able to create a comprehensive and national plan that looks at how we fix roads, how we fix potholes, how we can fix sidewalks, which are just as critical of a component in terms of the infrastructure as anything else," he told the audience.

Unlike the answers provided by the other candidates, the only woman candidate seemed downplayed sidewalks and roads in Jackson.

"Sidewalks are good, but I'm more (about) creating areas for park and recreation, especially in the areas which I reside, and that's the area of Georgetown. ... [I]f it were left up to me, I would just tear down all of the abandoned houses and put something there that would be beneficial to the people who live here in the City of Jackson," Chapman said.

However, Chapman later added, she is "all for the sidewalks, especially for our handicaps and people who love to walk and exercise."

In the two-hour forum, the teenagers, who formed and chose the questions from topics that student ambassadors from various Jackson Public Schools provided to them, confidently tackled issues that affect them and their loved ones daily. The questions came from six focus areas that student ambassadors convened by the Jackson Council PTA brainstormed as priorities: entertainment, safety, local support, equality/consistency, community and intergenerational solutions.

Based on the questions, young Jacksonians are extremely concerned with the growth of Jackson and where will it be years from now, asking each candidate a vision question of what the city will look like 20 years from now if he or she is elected.

"At schools like Clinton, Madison Central and Jackson Prep, kids are expected to do better than students at many of our Jackson Public schools like Lanier and Wingfield," Lanier High School junior Kenytta Brown told the candidates.

"How can you as mayor help overcome these stereotypes, low expectations and the unequal opportunities we get?"

Yarber went on to say that members of the Jackson community and students at all JPS schools "must adopt a mentality that we are just as good as anybody else."

Lumumba said Jackson needs a student-driven learning curriculum that takes advantage of updated technology, as well as the need to create a position on the Jackson Public Schools board for a young person to have input.

Crime: Why, How to Stop?

The young questioners also wanted to know how candidates plan to break the cycle of crime among and against young people and what alternatives the candidates could help create to refrain from sending them straight to juvenile detention, which studies show can make it more likely that a young person commits worse crime.

"I think that we don't use community service enough," Sen. John Horhn said. "If a young person is found to be guilty of an infraction as opposed to locking them up and treating them like a criminal, I think they ought to be given community service where they do something that is productive, that is useful, and that is giving back to the community."

Libertarian Sanders, on the other hand, said "we are approaching crime whether it be youth or adult crime in a terrible way," and that we must use community programs that are currently in place rather than creating more.

He offered a list of potential solutions: "Going back and engaging the youth in their communities. Creating place making is ultimate. Making sure that there is a community identity; place and purpose need to be in our community. Most crime comes from troubled youth. A lot of troubled youth in the city who don't have stable families or a traditional mom and dad family ... those students tend to act up in school, then it progresses into public properties," Sanders said.

"It's good when we create opportunities, activities, agencies that socially decriminalize the justice system for our young people," Sanders added.

The YMP students also asked about tearing down and renovating abandoned houses in their neighborhoods that tend to attract crime and present dangers for citizens. Media panelist Shakira Porter, a junior at Wingfield High School, asked the question, saying she grew up next door to an abandoned house and has witnessed young kids doing inappropriate things at these uninhabited locations.

"I don't believe that every house needs to be torn down. Sometimes we can renovate those homes, (and) keep them on the tax roll. People can live in them, and it makes a great home and quality of life for the individuals and residents of Jackson," Crudup said.

Reynolds, who positioned himself as the contrarian and only viable option among a line-up of unfit opponents throughout the forum, did not fully answer many of the questions, even telling the teen panel that one of the questions—about getting more community members to clean up neighborhoods rather than people coming in from outside to do it—was "offensive."

"One student saw on Twitter that a lot of white people from outside the community were cleaning up around Callaway (High School)," Dartavius Archie of Wingfield High School asked the all-black panel of candidates. "How can you lead and inspire communities to take action to fix up our communities ourselves?"

Lumumba, however, then told the students, "Thank you for that question." He then explained that he plans to promote a "citywide cleanup campaign" drawing together people from all neighborhoods to work "collectively" to beautify the city, calling it a "common concern."

"We'll make it clear that we're in it together," Lumumba promised.

Reynolds was also the only candidate who tried to stand each time he took a question, coming around the table and pacing in front of the other panelists as he spoke. However, the 15-year-old moderator soon stepped in. "Please remain seated," Maisie Brown told Reynolds pointedly the last time he tried to take center stage.

The Youth Media Project has posted videos of the forum, and members are encouraged to comment and give feedback for the event on jxnpulse.com. Audience members also filled out a questionnaire focusing on crime causes and solutions at the forum, which readers can still fill out online. Read interviews with several mayoral candidates at jfp.ms/election2017, and email story tips about Jackson to [email protected].