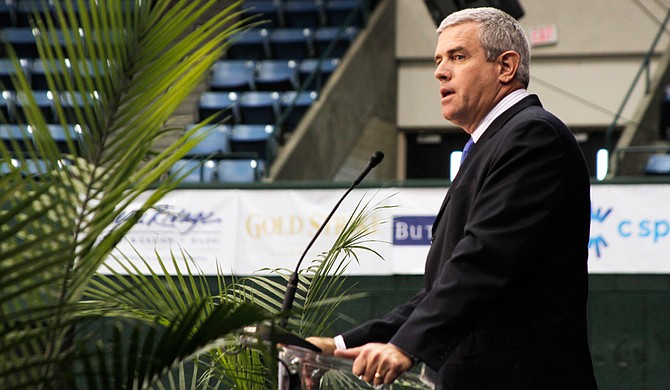 Gunn used his speech at the Mississippi Economic Council's annual event to double down on his stance that MAEP, which the Mississippi Legislature has not fully funded since 2008, has failed to give public schools a predictable source of revenue.

"This formula has failed to ensure that money reaches the classroom," Gunn said. "It has failed because it allows spending on administration to be abused—the formula does not meet the needs of today's education."

Madison County Schools and Jackson Public Schools both spent 100 percent of their MAEP dollars on teacher salaries last year. The two districts are drastically different, especially in terms of student population size and demographics, and the 2016 accountability grades reflected that: Madison County Schools received an A grade, while Jackson Public Schools received an F grade.

Technically, MAEP funds can go toward an array of costs from instructional materials to district employee salaries and insurance to transportation or gifted education.

Gunn said that funding for education has increased in recent years. The Legislature did appropriate more funds to Chickasaw Cession counties and for students with special needs for fiscal-year 2017. MAEP was funded the same amount as the previous year.

"We want the money to go to improving student achievement, we want to see results, we want a better formula," Gunn said Wednesday. "If you're really concerned about improving public education in Mississippi, you will agree that the time has come for a better formula."

Both Gunn and Lt. Gov. Tate Reeves have contracted with the New Jersey-based firm EdBuild to evaluate the state's funding formula, a move that the state's association of school superintendents supports.

""The number-one priority in (the association's) 2017 legislative agenda is to improve student achievement," a press release from the association states. "We agree wholeheartedly with this effort and look forward to working with the Legislature as they move forward."

Mississippi legislative leaders have said that re-evaluating the formula will lead to more equitable funding for school districts and more funding for students in the classroom. Critics of the move to re-evaluate the formula fear that leaders will use this evaluation as a chance to reduce education funding in the formula and expand school-choice options.

"We have some people who are satisfied with the status quo; we are not," Gunn said at the Hob Nob. "It's time to bring common sense and fairness to the way we fund our public schools."

Legislative leaders will meet with EdBuild staff this afternoon to discuss the formula.

Other Mississippi leaders pushed for education reform at the Hob Nob yesterday, including Attorney General Jim Hood. He said that the State would need to invest $165 million a year to implement successful pre-kindergarten programs throughout the state, which currently has 11 pre-k collaboratives in operation.

"If you look at the studies, a child from age 3 to 5, their brain development is about 85 percent that occurs during that period," Hood said. "And simply by having someone read to them increases their vocabulary—it's the cheapest bang for our buck."

Hood suggested creating a state lottery to help pay for pre-kindergarten in the state, saying that it was easy solution for the Legislature to embrace.