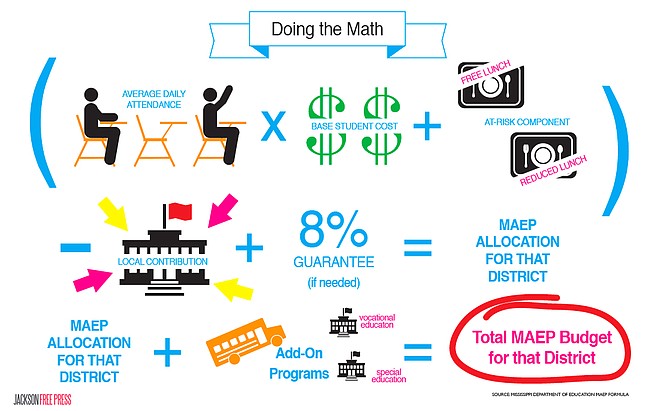 The Mississippi Adequate Education Program is the state's formula to "establish adequate current operation funding levels" in each school district under the Mississippi Department of Education's jurisdiction to meet a "successful level of student performance." MAEP funding (theoretically) covers teacher and district employee salaries, retirement and insurance, instruction materials, operational costs, transportation, and special, vocational, gifted and alternative education. MAEP accounts for the majority of the Department of Education's budget, funded by the Legislature and Mississippians' state tax dollars. Mississippians will vote on Nov. 3 on Initiative 42, designed to force the state Legilsature to fully fund MAEP.

Calculated in the second and third month of preceding year for school districts of all students K-12 (excludes self-contained special education, and accounts for consistent growth of district over 3 years).

Calculated by averaging components of "successful and efficient" schools and districts. The components averaged are Instruction (teachers per 1,000 students), Administration (admin/staff ratio), Maintenance and Operations (spending per 100,000 square feet, maintenance staff per 100,000 square feet) and Ancillary (librarians and counselors per 1,000 students). The base student cost is re-calculated every four years, and an inflation adjustment is made in off-years.

The at-risk component number is 5% of the base student cost multiplied by the district's number of free-lunch participants on Oct. 31 of the preceding year.

Using the second preceding year's data, property value taxes and yield from mills based on local tax base is collected and capped at 27% of the program costs.

This is the catch-all if after the above components are calculated, a district still doesn't receive at least 8 percent more funding than they did 13 years ago (in 2002), they will get at least that much funding.

Special and Gifted Education: A teacher unit is added for each approved program in district—funding is based on certification and experience of approved teacher, and approved through calculation in four specific MDE offices.

Vocational Education: Half of a teacher unit is added for each approved program in district—funding is based on certification and experience of approved teacher, and approved through calculation in four specific MDE offices.

Alternative School Programs: .75% of the district's Average Daily Attendance or 12 students, whichever is greater, is multiplied by the state average per pupil expenditure in public funds for the preceding school year.

*value dependent on school district size, numbers or Average Daily Attendance (The Base Student Cost stays the same across all districts) 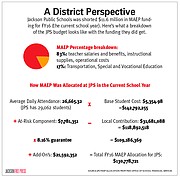 Here's a quick guide to who's who in the money race to squash or push the citizen-driven initiative on the ballot in November. The amounts listed were raised by early October. The next filing date is Oct. 27.

Out of State Funders: Americans for Prosperity (KidsFirst)