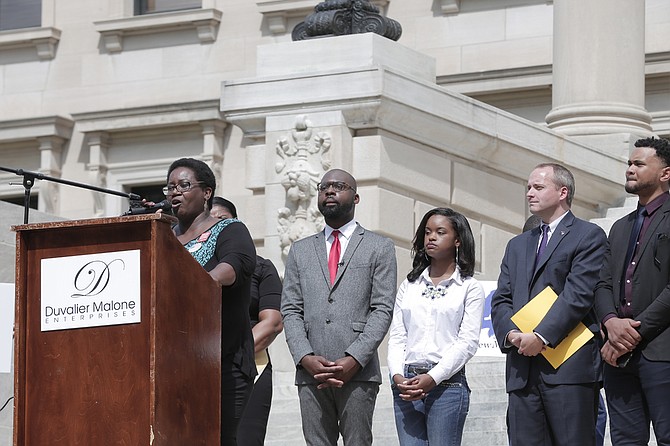 Rep. Kathy Sykes, D-Jackson, said she has already pre-filed a bill to change the Mississippi flag in the 2017 legislative session. Photo by Imani Khayyam.

JACKSON — Gov. Phil Bryant should apologize for declaring October "Racial Reconciliation Celebration Month" without acknowledging the dark past of racism in Mississippi or how the state flag plays into that history, protesters said at a press conference at the Capitol on Thursday. Community leaders told stories of the deaths of Emmett Till and Medgar Evers, saying that a month dedicated to racial reconciliation is insulting while the state flag still flies.

In February, Bryant declared that April would be Confederate Heritage Month while legislation was pending to change the Mississippi state flag, which ultimately failed.

Maisie Brown, a freshman at Jim Hill High School, called on the governor Thursday to acknowledge how the state flag, with its Confederate flag in the canton, shows disrespect to her and others.

"This flag will be taken down," said Brown, who wrote a widely read column against the flag for the Jackson Free Press earlier this year. "Maybe not now—but it will be."

Rob Hill, the state director of the Human Rights Campaign in Mississippi, spoke in solidarity with other speakers, saying the LGBTQ community understands being a target of hate. He called on the governor to apologize and to change the state flag.

"When a tradition is one of hate, it's nothing worth celebrating," Hill said.

"It is now time for us as legislators and elected officials to move forward to allow a vote on the change of our state flag; you know sometimes we have to make tough decisions," Sykes said on Thursday. "We are the last state in the union to continue to incorporate the Confederate relic in our state flag."

House Speaker Philip Gunn told the Jackson Free Press back in July that the Legislature is the better venue to change the state flag, but that the process might take time.

A citizen-driven ballot initiative to put the state flag issue on the 2018 ballot will end today if it does not get enough signatures, the Associated Press reported.

As for an apology, Duvalier Malone, a Mississippi native who lives in Washington, D.C., and coordinated Thursday's press conference, says he sent the governor's office a copy of the press release and intends to send a formal letter to the governor seeking an apology.

Racial Reconciliation Celebration Month is "to encourage all of our citizens to collaboratively and faithfully join Mission Mississippi in the work of promoting racial reconciliation and healing and to bring about unity throughout Mississippi," the proclamation states.

The governor's office did not respond to requests for comment.