The ‘Cloth on the Stick’ Represents Hatred Toward Me | Jackson Free Press | Jackson, MS

The ‘Cloth on the Stick’ Represents Hatred Toward Me 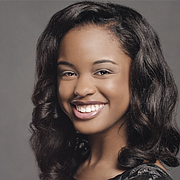 "As a people we are fighting to maintain the heavenly ordained supremacy of the white man over the inferior or colored race; a white flag would thus be emblematical of our cause. Such a flag would be a suitable emblem of our young confederacy, and sustained by the brave hearts and strong arms of the south, it would soon take rank among the proudest ensigns of the nations, and be hailed by the civilized world as the white man's flag."

—William Tappan Thompson, a designer of the "stainless Confederate flag," adopted in 1863, that shares the controversial southern cross with today's state flag.

As a young, black woman growing up in the South, I was taught many things, but one of the most important was to be respectful at all times, even if it was not deserved in every situation.

From my standpoint, the Mississippi state flag depicts pure disrespect. Southern states formed the Confederacy to fight the Civil War so they would not have to adhere to federal mandates and, mainly, to keep slavery intact. Slavery of Africans, who were mostly kidnapped from their native land to become property, was essential to the Confederate states' economies and  livelihoods.

The formation of the Confederacy was solely based on the protection of white Americans to keep my ancestors enslaved. The battle flag came to represent them as a people and what they stood for: the institution of slavery.

Today, the flag used then to symbolize what they believed is used to represent my state. The moment one asks me where I am from, they often scowl as I answer "Mississippi."

Our name itself often has a negative connotation when it is mentioned, especially related to racial issues and injustices. Because of our tumultuous and graphic history, many believe we have made little to no progress to change our ways and hateful thought processes.

I have witnessed the change in my fellow Mississippians and believe we are on a much better road. We even had an African American Miss Mississippi in 2014. But when we mention and try to exhibit the progress we've made over the decades, outsiders look at our flag and do not hear anything we've said.

When my state decides that a Confederate flag represents me, I am not only deeply offended, but I am hurt. Growing up in this state, I became aware at an early age that not everyone here shares the same thoughts of racial equality as I do. The First Amendment gives everyone the right to exercise free speech. But when my state government condones such thoughts and representations of hatred, it is a serious problem that has to be addressed sooner or later.

No matter how many different ways people have interpreted this flag over the years, the creators themselves designated its primary purpose: to illustrate white supremacy and represent a group of people who wanted my people to stay enslaved.

Another question that baffled me even as a younger child was why people support something that depicted such oppression and hatred of me, as an African American. Why was it so simple for Germany to ban such things as the swastika and signs saying "Heil Hitler," which depicts a dark and haunting six-year time period in their history, but we can't simply change a flag of a four-year war that honors 400 years of oppression that still affects us today?

I simply ask Mississippians to just consider what it represents and what it truly means to my people. Many claim it's "just a cloth on a stick" or their own ancestors' "heritage," but to me, as a young African American woman, it simply represents nothing but hatred toward me. I am offended when I hear racial slurs or see things that are meant to disrespect my people, but I can get over it because everyone is entitled to their opinions, and some things I have no control over.

It's painful to see me and my fellow Mississippians who don't celebrate the flag depicted in such a manner and to know my state is content with this. For the people we elect to think this is OK only adds insult to injury.

Our leaders need to face the real pain the "cloth on the stick" causes and decide to change it.

Maisie Brown, 14, is a student at Bailey APAC Middle School in Jackson.