On Way Out of Jackson, Siemens Addresses ‘Stranded Bills’ 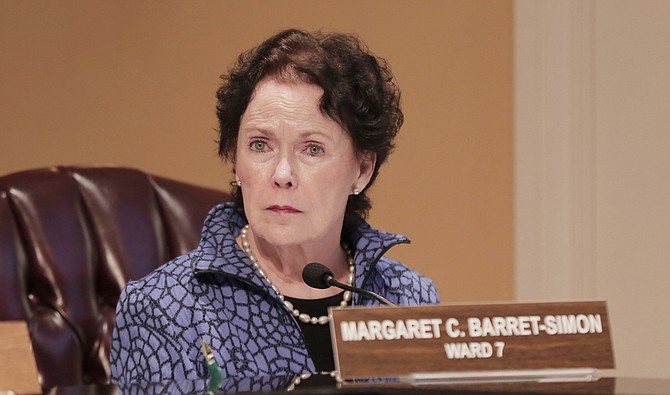 Ward 7 Councilwoman Margaret Barrett-Simon is a long-time representative of Ward 7, but is vacating her seat in the 2017 elections. Photo by Imani Khayyam.

JACKSON — The Jackson City Council expressed concerns about charging those on fixed incomes the larger-than-normal bills that have accumulated over the last six months as the water-billing department and Siemens close down their cooperative effort to alleviate difficulties.

"Are we going to go to these elderly people and turn their water off?" Barrett-Simon asked, adding that the City might have not prepared citizens for the sticker shock of these latest round of large, backed-up bills. "It is alarming to older people who get these bills out of the blue, and they are really frightened. And so we have to give them a plan they can understand."

Ward 5 Councilman Charles Tillman interjected, putting a personal spin on the question. "I am one of those citizens she is talking about," Tillman said.

The comments took place during a presentation by the Jackson Public Works Department and Siemens representatives during a Nov. 9 special budget committee meeting.

The most important thing to understand, Smash told the council, is that the City has always estimated water bills, evenwhen customers did not know about it.

"The City has estimated bills forever. It was never an issue because it was never indicated on the bill," Smash said.

Now that customers are receiving astronomical bills, like one woman Barrett-Simon said told her of a $3,000 bill, Smash said they are not mistakes but rather accumulation of owed bills. Siemens representatives told the council that they released these bills for delivery after contract workers solved the problems that "stranded" them in the billing system in the first place.

"Any issue that would not be closed would prevent the bill from being sent out," Jerry Philmon, project manager for Siemens, told the council.

Philmon explained that between late June and the end of October, the public works department and Siemens separated 15,000 bills from the rest to focus on the issues that kept them locked in the system. These bills were locked for many different reasons, including computer or human error, and required a highly skilled technician to go into the billing system and fix the problems, freeing the bill for delivery. People received large bills that had built up while their bills sat in digital limbo.

"We took that away from the operations so we could concentrate on getting bills out regular every month. And most of those bills have been resolved," Wanda Knots, deputy director of public works, said. "There are a few other bills that we are working on currently. The water/sewer business office is currently working on over 2,000 bills."

It was a cooperative effort between the two entities, Knots said, one that netted the City an additional $11 million in sent bills.

"We took care of them and cleared them based on y'all's parameters," Philmon said. "Based on those guidelines, we were able to work these bills and then turn them back over to the City department ... to be able to generate a bill to the client."

But now, the contract with Siemens has begun to enter its final stages with the City left wondering how it can handle the billing system on its own.

"The reality is living with this system day-to-day is going to be a significant challenge, as it has been," Smash told the city council.

Since the cooperation with Siemens began, Smash's department has looked ahead to when Siemens would leave, but with few options to supplement the vacuum of skills.

"Normally, you want to take a hard look at what you have in place today, and that's staffing, everything. For whatever reason, the complexity of the system, from the standpoint of billing, is going to be a challenge for the employees," Smash said.

The concern of whether Jackson can attract the talent it needs to properly address municipal issues has come up repeatedly for the council.

Qualified people are not necessarily available in the geographic area for the pay offered, Smash said. "From what we can tell at the onset of the contract that was not clearly understood or presented," he said.

But the real difficulty, Smash added, decision-makers did not discuss or plan for that challenge at the outset of the project, leaving his department without the ability to deal with the technical problems of "stranded bills."

"The vulnerabilities that the system kind of sets up for us was something that was not contemplated when the contract was sent out," Smash said.