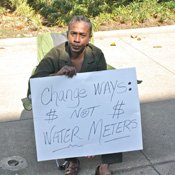 An agreement to evaluate the city's water and sewer system has many Jackson residents worried about an increase in cost to the public.

The City Council voted 5-2 to move forward on talks with Siemens to audit the city's water system and evaluate the need for a new electronic water-meter system. The Council instructed Siemens to estimate the cost of the audit before moving forward.

Opponents of the measure protested outside City Hall with signs that read "Change Ways: Not Water Meters" and "No New Water Meters."

LaTrenda Funches, a protester and a 20-year veteran of the U.S. Navy, said she is concerned that lower-income households are already being taken advantage of with late fees, and that the problem will only get worse with new meters.

"They are overcharging the poor people," Funches said. "You got water running down the street and then you want to charge this 80-year-old lady $50 because she couldn't (pay) on the first (of the month)."

Ward 3 Councilwoman LaRita Cooper-Stokes said the Council needs to review the $50 late fees because they are further hurting citizens who already have trouble paying their bills.

McNeil said the new system will not cost citizens more money. The only people who will see a rise in their water costs are those who are currently receiving water dishonestly or have meters that are not accurately monitoring their water consumption. The point of the project, he said, is to fix problems with the water and sewer system without rate hikes on citizens.

Ward 5 Councilman Charles Tillman, who voted against the measure along with Cooper-Stokes, raised concerns with Siemens' history, especially the company's work in McComb, where Siemens is in litigation with the city government over the water system they recently put in there.

McNeil said the problem there arose after the system was put in. A new administration did not like the Siemens system and the city is trying to get out of their deal with Siemens. To date, McComb has not paid Siemens for the new water system, McNeil said.

The EPA is requiring Jackson to improve their water system, which could mean rate hikes to citizens, Ward 7 Councilwoman Margaret Barrett-Simon said.

"In Jackson, we are facing tremendous water and sewer increases in the future," Barrett-Simon said. "The EPA has come down on us, just as they have many other cities around the country, with mandates, with no federal funding and no help. For us to pass up an opportunity today to begin this evaluation, audit, whatever term you prefer to use, that could provide savings to our customers, our citizens, our rate payers, is beyond my comprehension.

"If there is a possibility here that (Siemens) can show us a way that we can lower the water rates for our people (and) keep the water rates from rising, it's wrong if we pass up this opportunity."