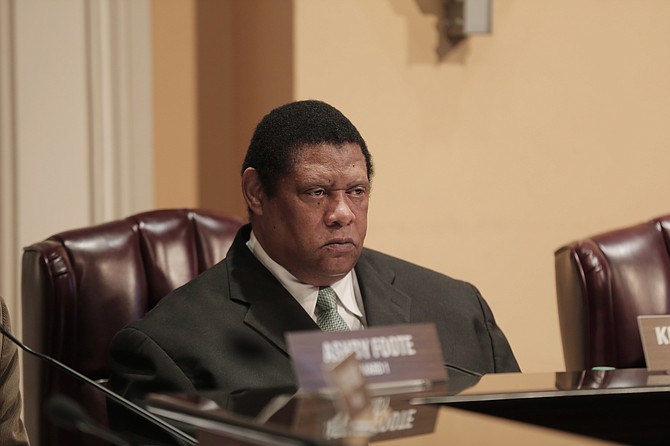 Ward 3 Councilman Kenneth Stokes asked if the $300,000 to continue the contract for the Oracle computer system would solve water-billing problems. Photo by Imani Khayyam.

JACKSON — Even as complaints mount about large and incorrect water bills in Jackson, the City Council approved a contract of more than $300,000 to continue use of the Oracle software that supports the troublesome system.

"My concern is whether or not if we enter into this contract, if it will help people get their right bills," Ward 3 Councilman Kenneth Stokes told the body before the Nov. 3 vote on the issue.

"It allows us to get software patches from Oracle and to continue using their software," Smash said.

But the mayor jumped in, adding that Stokes wanted to know if the contract would fix the billing problems. "This is not that," Mayor Tony Yarber said.

However, citizens continue receiving outrageous bills, or in the case of Mississippi College Law Student Trey Spillman, work directly with the billing department.

Spillman replied to a JFP tweet that the council was ratifying the contract with a simple message: What about his incorrect $1,000 water bill? A few days later, on Nov. 3, told the Jackson Free Press that he had been down a long road with the water department since last November and a year later was just making some headway.

"I moved to a house on the same street," Spillman said, adding that he never received his deposit back. "That's gone."

He received a bill in the summer for the two addresses and still has to work with the department to figure out what he owes, he said. As of November, he continues to make trips to the water department, trying to resolve his $1,000 bill.

The city council unanimously approved the water-billing contract in the amount of $346,608.79 for DLT Solutions, Inc., out of Herndon, Va. The other two companies, PCMG from Chantily, Va., and Mythics from Virginia Beach, Va., were close bids, with PCMG only a little less than $2,000 dollars from DLT's price.

The contract extends the software licensing and maintenance on the software structure, based on Oracle technology, that runs the City's customer care and billing system, one of the foundational parts of its almost $90-million contract with Siemens.

However, since the implementation of the Siemens-contract system late last year, Jackson water customers have had experiences ranging from never receiving a bill at all to receiving belated, or incorrect, bills in the four-digit range.

All these difficulties ate away at the City's largest enterprise revenue fund in the budget, the water/sewer revenue. City and Siemens officials have explained in the past that the interaction of the new and old systems are to blame, with Siemens providing extra staff and footing the bill for supplementary overtime for City of Jackson employees to work on the billing problems.

"We can't say that this is going to fix the issue that we are having with billing," Yarber said in response to council questions about the billing problems, including from Ward 7 Councilwoman Margaret Barrett-Simon. If the City did not approve the contract, "what would the alternative have been?" Barrett-Simon asked.

Smash explained that the City could not continue to operate the billing program without the contract. "There is no alternative to it," he said.

The contract is also a sign of the change in use-of-technology agreements. Large-scale tech companies like Oracle charge for continued license use and updates for their software, instead of one-time buys like retail software. Companies like DLT handle the more hands-on aspects of the software maintenance.

Software, Contractor or Both?

The council has a financial meeting scheduled for Nov. 9, during which it will hear presentations from the Yarber administration on the water-billing situation, but it doesn't alleviate the uncertainty now for people like Spillman.

"They don't really know how much I owe," Spillman said.

Oracle's customer-care and billing software has come under fire before, although a different contractor was responsible for implementing it. In 2013, the City of Los Angeles hired a firm, PricewaterhouseCoopers, to implement a new billing system structured around the Oracle software.

After implementation, the Los Angeles Times reported in 2015, problems with the software cost that city a combined loss of $641 million of its normal revenue of $5.6 billion. The problems spawned class-action lawsuits from customers for overcharged bills and a legal battle between L.A. and contractor that continues to this day.

Jackson city administrators have repeatedly moved the conversation away from legal wrangling with Siemens over billing issues, and the council has also refused to approve or support any action or allegations of fraud or poor management by Siemens for the billing part of the $90-million contract.

"I would love to buy a house in Jackson," Spillman said, "but I don't want to deal with the city services, like if I am going to have to fight things like water and utilities," adding that the problems might push him to Madison or Pearl instead.