No Sanctuary: A Rough, Undocumented Road 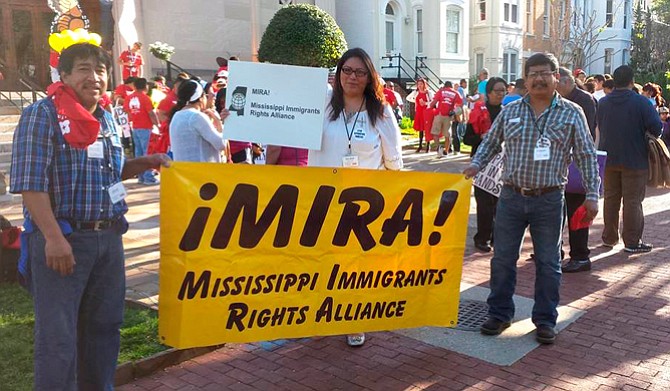 JACKSON — Melinda Medina was on a family road trip in summer 2014, returning from a Mobile, Ala., flea market near the Alabama and Mississippi state line when a patrol car suddenly sped up alongside her driver-side window. The cop then dropped back and started following her, his blue lights flashing.

Medina was with her husband, Jesus Mateos Ramirez, and their four children, following behind her sister, mother and brother-in-law's car along Interstate 10, heading home after celebrating her mother's visit from south Texas. As Medina pulled over to the side, her family in the car ahead noticed and did the same.

The white officer approached her car as Medina watched anxiously. She wasn't sure what she had done wrong.

As the police officer approached Medina's car, he made a routine visual inspection as he neared her driver's-side window. After inspecting the car from the outside, the officer looked at Medina's husband and immediately asked, "Do you have papers?" 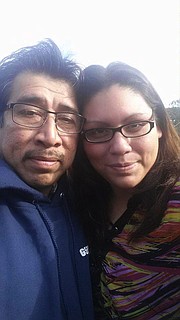 Melinda Medina’s husband, Jesus Mateos Ramirez, was a victim of profiling during a family trip in 2014. Photo courtesy Melinda Medina

Medina, a community organizer and co-owner of Gulf Coast Latino Services, couldn't believe what she just heard the officer ask. Medina's husband is an undocumented immigrant from Vera Cruz, Mexico, and she wasn't sure what was about to happen next.

"No, I don't," her husband responded honestly.

Medina kept her cool, knowing her rights and that the police officer could not legally ask about her husband's or anyone's immigration status. She asked the officer why he had stopped her.

The officer reported that she had been following too closely to the car in front of her, which happened to be her sister's car.

The officer looked into the back seat of the family's car and noticed the family's four children, ranging from age 1 to 14. He then turned to her husband. "You know I could call border patrol if I wanted to, right?" he asked him. The threat not only startled both Medina and Martinez, but immediately incited fear of how the next 10 minutes could change their lives forever.

'We Don't Want You Here'

The officer's threat of calling border patrol is the reality many undocumented immigrants face daily with fear.

"Growing up, I can't really say that I felt discriminated against," Medina said in an interview. "I grew up like everybody else (in south Texas). We were all brown, spoke both English and Spanish, and we were all the same."

Medina was born in Tyler, Texas, but grew up in Mission—a city that sits across from the Rio Grande River in Hidalgo County, approximately 20 miles north of border city Reynosa, Tamaulipas, Mexico.

Her first taste of discrimination didn't come until Melinda was 23, after her family moved out of Texas to Mississippi, nearly nine months after Hurricane Katrina struck the Gulf Coast, leaving cities and communities wrecked. "My stepfather got a job where he was contracted for several construction sites rebuilding the coast, so he brought the family to (Biloxi) for work," Medina said.

It was in Mississippi that Medina started hearing comments like, "Go back to where you came from," and "We don't want you here." She has now been in Mississippi for 10 years.

The City of Jackson currently has laws in place to prevent law enforcement from asking anyone about their immigration status, with the exception of public safety and investigation or prosecution of a criminal offense.

In 2014, Jackson police officers needed a way to communicate with an influx of immigrants and teamed with Spanish professors from Jackson State University to learn conversational Spanish.

In the legislative session that ended in late April, undocumented immigrants like Medina's husband dodged a legal bullet that would have made it incumbent on the trooper to demand his papers.

It sought to bypass cities such as Jackson that refuse to become "the immigration police," as Jackson Police Chief Lee Vance calls it.

That is, immigration law is federal, and state and local agencies do not typically want to be pressured to extend additional resources doing the feds' job.

Sen. Sean J. Tindell, R- Gulfport, is the principal author of Senate Bill 2306 that attempted to forbid "sanctuary cities" in Mississippi, pushing back on cities like Jackson that refuse to become the immigration police. A "sanctuary city" is defined as one that provides refuge to undocumented immigrants and where its local police do not act upon the same authority granted to federal immigration agencies.

The bill would have granted authority to local law enforcement to assist federal agencies in legally detaining undocumented citizens, as well as protect law enforcement officials against any legal responsibility for their actions against immigrants including arrests based on probable cause to make the search and inquiry.

Not only did the bill seek to limit the rights of undocumented immigrants, but it would have opened the door for questioning of American citizens that officers thought could be undocumented.

It would have required additional taxpayer resources to detain individuals for speeding, running red lights, following too closely behind a vehicle, or victims of racial profiling who do not know their rights. In Medina's husband's case, SB 2306 could have legally detained him for an extended period of time on the taxpayer dime.

Mississippi taxpayers on average pay approximately $36.54 per inmate for each day's detention of undocumented immigrants, according to a 2006 survey report from then state auditor Phil Bryant, a Republican, in Mississippi.

Bill Chandler, executive director of Mississippi Immigrants Rights Alliance, says that a law such as SB 2306 would not only have a financial impact on the state, but threaten public safety and local communities throughout Mississippi, and is a punitive solution in search of a problem.

"SB 2306 undermines community safety for all Mississippians by taking away discretion from local police in prioritizing their work," Chandler said. "The safety of every community member depends on the trust and a willingness to interact with police in order to participate in investigating and solving crimes."

More Than a Green Card

So why doesn't Martinez just become a citizen? The answer is more complicated than issuing $20 in exchange for a green card.

"You're talking about people who are denied because they don't have enough money to come across the border," Medina said. "They don't have enough assets so you're paving a way for those who have more money, and placing a system of oppression on an already oppressed group of people."

Chandler says often immigrants of all nationalities are not familiar with the intricacies of U.S. immigration law and then realize they should try to get residency, but for one reason or another, these individuals are not eligible. He says immigrants can face many different situations that prevent undocumented individuals from acquiring documents.

"There is no pathway to citizenship when you're already inside the country undocumented," Medina says. "So what happens is that to get an attorney, there is a process you have to go through to file for a translation of deportation. Once you notify immigration and customs that you're here undocumented, you will be deported."

Medina says in order for anyone to begin a legal process, they run the risk of being picked up and removed from the country.

"For a long time, my husband was the breadwinner of the family," Medina said about why her husband remains undocumented. "So for us it was hard to even consider him leaving and then thinking what we were going to do. In order to (become documented), it takes money. "

She says an undocumented citizen would have to go back to his or her home country and risk not being let back into the U.S., and if they try to apply for a visa while in a foreign country, they aren't going to be able to get it unless you have the money.

"The problem with immigration laws is that these laws have been designed to manipulate labor," Chandler said. "These laws are so complex. The reason is to get cheap labor and workers that are unfamiliar with labor laws and exploit them."

Just last week, 12 undocumented workers were arrested for fraudulent use of identity and violation the Mississippi Employment Protection Act. The 12 men were employed by Bonds and Associates, a construction company based in Flora, Miss.

Chandler says many employers like to hire undocumented people because even if these individuals know the laws, they are less inclined to challenge their employers for wage theft, low wages or no overtime, and even if there are accidents on the job.

"(Undocumented workers) are working all the time and get residency when it is too late," Chandler said. "The laws are not broken; they are crafted the way they are to make it difficult for immigrant workers."

'I Need Some Help'

When Medina first arrived in Biloxi, she realized there was an enormous language barrier throughout the state. In south Texas she had never really thought about it.

So, when her family settled into their new Biloxi home, people quickly realized that she spoke both English and Spanish and began to ask for help.

"It was apparent there was a need to be met, and there weren't any resources available to this under-served population of people. That's how I began working with the community in Mississippi," Medina, now a MIRA community organizer.

In her business, she provides translating and transcription services to the Hispanic community on the Gulf Coast through in-person translating services or by phone. Gulf Coast Latino Services also provides notary services and a homework club for non-English speaking parents, all at an affordable cost, she said.

A study by immigrationpolicy.org found that "Latino-owned businesses in Mississippi have sales and receipts of $323.7 million." Universities throughout the state welcome international students from all over the world, and the same study concludes, "Mississippi has 2,467 foreign students who contribute $42.3 million to state economy."

Medina was relieved that SB 2306 didn't pass because it might have caused Latino people to leave the state. "Maybe that's what they wanted to happen, but I don't understand why (the state) would want that," she said.

Mississippi would lose more than $583 million in economic activity if unauthorized immigrants were removed, according to the immigrationpolicy.org study.

"No one comes here for a handout," Medina said. "They come here to better their own family, but when you implement laws that make them subject to acts of violence and crime; it's no longer safe for them to stay."

After the Mississippi police officer threatened Medina's husband with deportation and left her family with a warning on the side of the road, the officer made his way toward her sister's car.

"He walked over to their vehicle and asked them if they were all illegals," Medina says, recalling the conversation she had with her family at lunch shortly after the profiling incident.

"My whole family is Hispanic, and they are all U.S. citizens. They were mad it happened, and although it didn't affect them, they got nervous for (my family)."

Medina says the officer went over to her sister's car and badgered them emotionally. She admits that her family was offended by his accusations.

"Because (my family) is not aware of the laws (about profiling), they said I should be happy he didn't do anything," Medina says. "The thing is that he shouldn't have done that to begin with. They didn't understand that part."

Onelia Hawa is an intern with the Jackson Free Press who reports on social justice, immigration and worker's rights. Email her at [email protected].