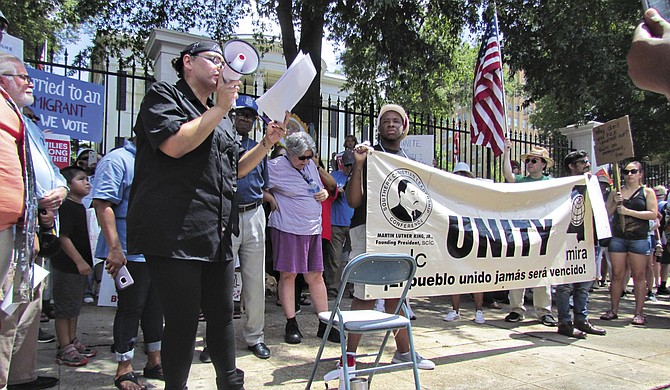 Melinda Medina, a community organizer for the Mississippi Immigrants’ Rights Alliance, speaks at a rally to end family separation on June 30. Photo by Marie Weidmayer

JACKSON — "Get out of our country, you don't belong!" When Melinda Medina hears those words, she feels sad for the person targeting her as a Hispanic woman who descends from a Mexican family. Although the American was born in Texas, she believes her face, along with those around her, are reminders of the "atrocities their white ancestors engaged in."

To Medina, America's immigration policies are personal, including those that separate children from their families such as the "zero tolerance" practices President Donald Trump and Attorney General Jeff Sessions began instituting in April, including for people seeking asylum from violence. Medina's family includes undocumented individuals who are married to United States citizens and have children who are citizens.

While her immediate family is legally in the United States, Medina said deportation and separation remain a scary prospect in her extended family, and the government could separate her nieces and nephews from their parents.

Medina attended and spoke at the Families Belong Together rally on June 30 in downtown Jackson because she does not believe in the U.S.' current policies.

More 100 people attended the rally, held outside the gates of the Governor's Mansion. They stood in the mid-day sun and 100-degree temperatures to voice displeasure with the separation of more than 2,300 children from their families and the slow reunification process, especially due to missing records.

"Look in the mirror and what do you see? Do you see the nations you have destroyed to create your privilege?"  Medina said. "There were 2,000 children who were ripped apart from their families, now suffering in detention. ... Do innocent children whose only crime is existing belong in jail?"

The government sent the children separated from their families to at least 15 states across the nation, including Michigan, Oregon and Connecticut, The Washington Post reported. They live in a variety of places, including foster care, an old Walmart store and tents. Mississippi apparently did not receive any children, even though the governor supports Trump's immigration policies.

The federal government has separated families from children after their arrest on the misdemeanor charge of crossing the border illegally, with many of them planning to ask for asylum, which must be requested on U.S. soil. Some of the later-separated families were turned away and not allowed to cross into official border stations even though they were seeking asylum, which is legal. 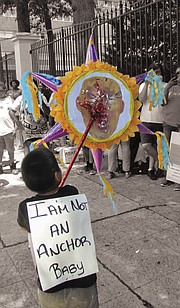 Jesús Mateos Jr. hits a piñata with the face of President Donald Trump on it at the rally to end family separation on June 30.

In Michigan, three detained fathers who were in other states received transfers to a new jail, which moved them closer to their children. The children are in the care of Bethany Christian Services, an organization that provides services such as adoption and foster care. Then on July 10, the fathers were reunited with their children, although it is unclear if the fathers and children will be released, the Detroit Free Press reported.

Reunification for all children and their families is supposed to happen by July 26, and those children 5 years old and younger should be reunited on July 10, U.S. District Judge Dana Sabraw ruled on June 26. About 100 children younger than 5 wait to be reunited, but the Trump administration said it will not meet the deadline. Instead, about 38 children were reunited with parents, and 27 children are not eligible for reunification, a filing from the U.S. Department of Justice shows.

But, reuniting families only to house them in detention facilities is not OK, Executive Director of American Civil Liberties Union Mississippi Jennifer Riley-Collins said at the rally.

U.S. District Judge Dolly Gee ruled July 9 that families cannot be reunified and still be detained as a family. The ruling that set the deadlines for family reunification also means families can no longer be separated, leaving the administration in limbo as it scrambles to find records for the families it separated.

Gee suggested releasing families on bond until their next court date. At the time of publication, it is unclear what the Trump administration will do.

"The problem with our government leaders is they no longer fear 'We the people,'" Medina said. "We have allowed the power to shift. But, we can, and we will take it back. Together we can make a difference. Let's show them, who we have hired by vote to do the job we have elected for them to do, just what it means to be 'We the people.'"

Gov. Phil Bryant was all-in on Trump's family-immigration policy from the beginning. "Like I shared with President Trump at the White House recently, America is a nation of laws, and I am grateful his administration is enforcing them. Every state must make similar decisions when removing a child who has been neglected or abused by their parents. It is an unfortunate reality of our justice system," he told The Clarion-Ledger.

No U.S. law, however, requires separating children from parents who cross the border illegally or try to seek asylum to escape violence or domestic abuse back home.

An essential part of taking the power back is voting in the Nov. 6 election and in the November 2019 election, because state and federal representation matters, Danyelle Holmes, the national organizer for the Mississippi Poor People's Campaign, said at the rally.

Mississippi Alliance of State Employees President Brenda Scott spoke about how workers' rights are reduced and voting is the best way to change the issue.

"If we don't go in the polls, put all our differences aside, vote for the bread and butter issues, vote for what unites us, then we can blame anybody but ourselves," Scott said. "We've got to make a change. Everybody leave here with the determination to do more than what you did before you got here."

However, voting might not be enough to make a difference, and more direct action might be necessary, speaker Joe Jordan said.

"If being comfortable and being legitimate and being polite is more important to you than protecting our families and our way of life, I don't care who votes, we're not going to change anything," Jordan said.

No matter what, the drive to change immigration policies and help minorities succeed in the United States must continue, Riley-Collins said.