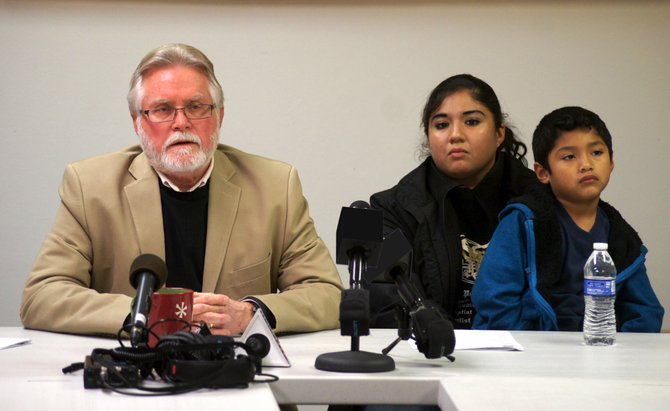 Law enforcement raided the home of Rosi Lopez (center) home in early December looking for a homicide suspect. Lopez, a U.S. citizen, said her family was a victim of racial profiling because the officer beat her and a relative and used ethnic slurs. She is pictured with Bill Chandler (left) and her son. Photo by R.L. Nave.

Early the morning of Dec. 3, Rosi Lopez, like every other parent in Jackson, was getting her 6- and 7-year-old sons ready for school when her front door came crashing in.

At first, Lopez thought it might be a home invasion—her Archer Street house has been robbed before—but as it turns out it was U.S. marshals looking for a murder suspect named Lucious Perkins. Perkins and Lopez look nothing alike. Perkins is an African American man, and Lopez is Mexican American, born in Rankin County.

Shots were fired, although it is unclear who fired first or whether someone inside the house fired. The Associated Press reported that a bullet fired by another officer hit a Mississippi Bureau of Narcotics agent in the stomach; Arturo Rodriguez, Lopez's nephew from Mexico, suffered a head injury. Lopez rushed her boys out of the home to a neighbor's, but an officer dragged her by her hair back to her house, she says.

Not only did authorities not have the right home, but Lopez said members of a task force, made up of marshals, Mississippi State Highway Patrol, Jackson Police Department and the Hinds County Sheriff's Office, barked anti-Mexican slurs at occupants.

Lopez, backed by immigrant-rights advocates, wants the U.S. Justice Department, which oversees the Marshal's Office, to investigate the incident.

Bill Chandler of the Mississippi Immigrant Rights Alliance wrote a letter to Attorney General Eric Holder, saying that the task-force members violated Lopez' and Rodriguez' 14th Amendment rights. "Apprehending dangerous criminals is an important government function. However, the Fourteenth Amendment to the United States Constitution does not disappear when law enforcement officials are carrying out important government functions," Chandler wrote to Holder.

A call to the U.S. Marshal's office in Jackson placed Tuesday morning was not returned by press time.

Latinos, who make up just under 3 percent of Mississippi's overall population, are frequent targets of both crime and police harassment. Chandler doubts law-enforcement would have used such heavy-handed tactics in northeast Jackson or if the residents of the home had been white. "I think it's outrageous that when law enforcement encounters Latinos, they either ignore them, show indifference, all the way up to (committing) racial profiling," Chandler told reporters.

Despite the fact that Lumumba and Lewis have been supportive of MIRA's efforts, Chandler said the city should implement the anti-profiling ordinance Lumumba sponsored when he was on the city council and better train officers.

As of now, there are no Latinos on the Jackson police force or Spanish-speaking officers, but the department did acquire electronic translators last year. Chandler and other people who work closely with the capital city's small, but growing Hispanic community say that government agencies often fail to protect Latinos and sometimes even target them for abuse. His group frequently fields calls from people who are attacked because thieves assume that Latinos often carry large amounts of cash. They say they contact the police but receive no help.

Rosi Lopez said she never received so much as an apology from the officers who roughed her up and frightened her children; her neighbors were more sympathetic, offering their sympathies afterward. She has not returned to her home on Archer Street and said she probably never will.