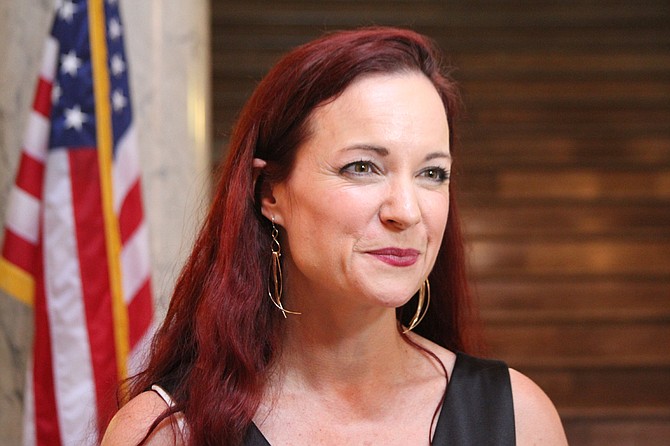 Mary Anna Malich, who lives in Chicago, and her daughter, Beth Ann Fennelly, a resident of Oxford, Miss., had recently driven into Jackson from Memphis. Then Malich sat on a cushioned seat in the state capitol's rotunda as her daughter delivered her very first speech as Mississippi's new poet laureate.

Malich never thought Fennelly would aspire to be a poet.

"I had actually thought that she would be a singer or an actress," Malich told the Jackson Free Press as she recalled Fennelly's childhood years. "Without question, so I was surprised. She was a fabulous singer, and she definitely was an actress."

The poet, who was born in New Jersey but raised in Lake Forrest, Ill., is a writer and University of Mississippi professor who became the new state poet laureate on Aug. 10.

Fennelly spoke to the Jackson Free Press before her induction speech at the Mississippi State Capitol. "It's true that poetry doesn't have a lot of cultural currency (today), but in the times of our most profound need—funerals, weddings and beautiful dedications—when we need grandeur and truth in language, that's when we turn to poetry," she said.

Fennelly and Franklin first moved to Mississippi in 2001 when Franklin was assigned a nine-month appointment at the University of Mississippi. Before moving, the couple had purchased their first home in Chicago and had no plans of staying in Mississippi after their time in Oxford.

"When we got to Mississippi, we fell in love," Fennelly said. "We felt like this was our forever home. We were able to stay on at the university, bought a house, and now we've raised three kids that go to the public schools."

Fennelly says she wants to use her new title to try to bring attention and energy to the causes that are important to her: literacy, storytelling and passing literature into the hands of Mississippians as frequently as possible, especially young people. She has published five books: "A Different Kind of Hunger," "Open House Poems," "Tender Hooks Poems," "Great with Child: Letters to a Young Mother," "Unmentionables," a novel she wrote with her husband, "The Tilted World" and her sixth, "Heating & Cooling: 52 Micro-Memoirs," which will be available in fall 2017. She has also received a Fulbright Grant in 2009 to go to Brazil, directed the Master's of Fine Arts program at the University of Mississippi from 2009 to 2016 and received several awards from the Mississippi Arts Commission.

"The average person doesn't read poetry, doesn't feel that they can understand poetry, which is one reason why I'm interested in getting poetry to young people," Fennelly said. "I think when we are kids, we accept that language is playful. You can sing, you can clap, and you can dance, and there is pleasure in it. Somewhere in the schooling, the pleasure leaves the poetry part of it, but oddly, it's able to stick with music."

Fennelly says that oral culture and hip-hop is something that speaks to people, whereas poetry is seen as elitist and difficult.

"I want to go back to before that schism takes place and see if we can reclaim for people the inherent power of poetry that is already there," Fennelly said.

When asked who has most inspired her craft, she says Sylvia Plath and Elizabeth Bishop are two of her favorite poets.

Fennelly urges and challenges individuals who may not see the importance of poetry by asking them, "Why do we need art?" "Art can remind us that we can take comfort in being sad because (other) people have been sad too," she said. "We are not alone experiencing things for the first time, and when you read, you find all these kindred spirits, and you see your sufferings have been other people's sufferings, your insecurities have been other people's insecurities, and it makes you fully connected to the human endeavor."

Holding a nationally recognized title such as poet laureate does not come effortlessly. "It's been a pretty long process actually," Fennelly said. "I was nominated last year, so I then (submitted) an application, which is pretty extensive."

A poet laureate is assigned the title of the official state poet and works to make poetry more accessible and available to Mississippians in their everyday lives. Fennelly will attend state events and participate in community and school events that promote poetry as an art form. Until 2010, the poet laureate was a lifetime appointment.

For it, Fennelly submitted a sample of works, her thoughts on what being a poet laureate means to her and her resume.

"In December I had an interview with the Poet Laureate Committee, and at that point I was a semi-finalist," Fennelly said. "After the committee interviewed all the semi-finalists they put forth three finalist's names, and I was one of them."

Fennelly says that the hardest thing about being a poet is always defending it as a profession, because some people may think poetry is a joke.

"You have to work so hard to show how meaningful (poetry) can be to their lives," she said. "In a way, it's like being a Mississippian, you know; you travel elsewhere, and you're on the defensive. You go to New York or something, and someone asks where you're from, and you say 'Mississippi,' and they just cant wait to say something snide or to assume that you're ignorant."

Fennelly will serve as poet laureate for the next four years.

"I would like that four years from now for the average Mississippian to feel like they saw, read and thought about poetry a little bit more than they had before," she said.

CORRECTION: In the original version of this story, we spelled Fennelly as Fennelley. The JFP apologizes for these errors.