Abortion in Mississippi: ‘The Fight’s Not Over’ | Jackson Free Press | Jackson, MS

Abortion in Mississippi: ‘The Fight’s Not Over’ 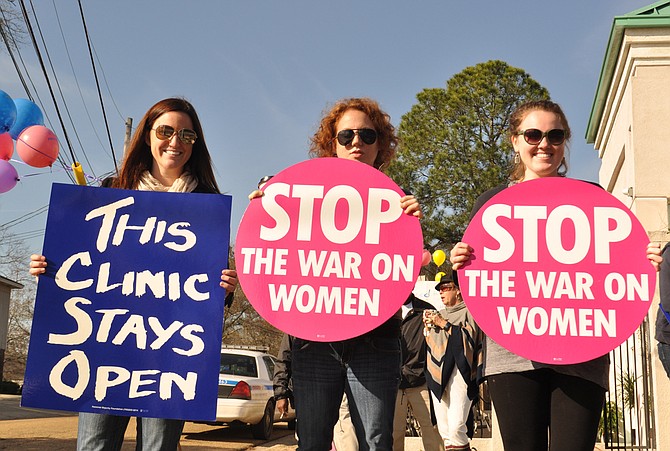 Supporters of the Jackson Women’s Health Organization are pleased that the U.S. Supreme Court denied the State of Mississippi’s petition to review the lawsuit against an admitting-privileges law the Legislature passed in 2012. Trip Burns/File Photo

JACKSON — Derenda Hancock and two other Pink House Defenders were sitting anxiously outside the Jackson Women's Health Organization with donuts and coffee the morning of June 27, all checking their phones for the news. Hancock saw it first on SCOTUS Blog.

The women jumped out of their chairs and screamed with excitement.

The court found both laws unconstitutional because they place "undue burden" on women seeking abortion access in the state. The ruling had real consequences for Jackson Women's Health Organization's 2012 lawsuit against Mississippi for enacting an admitting privileges law.

Hancock helped start the Pink House Defenders, a group of women who escort ladies coming to JWHO for services in and out of the building and, sometimes, fend off protesters. The group began, in part, as a response to a 2012 admitting-privileges law passed in the state.

Four years later, the litigation has finally come to an end. Despite rulings in the clinic's favor through federal court, the state appealed the U.S. 5th Circuit Court of Appeals ruling in the case to the U.S. Supreme Court in February 2015.

The U.S. Supreme Court did not take the case, instead issuing a sweeping ruling in the Whole Woman's Health v. Hellerstedt case, defining more precisely what exactly constitutes an "undue burden."

"Both the admitting-privileges and the surgical-center requirements place a substantial obstacle in the path of women seeking a previability abortion, constitute an undue burden on abortion access, and thus violate the Constitution," the Whole Woman's Health opinion says.

"The record contains sufficient evidence that the admitting-privileges requirement led to closure of half of Texas' clinics, or thereabout ... those closures meant fewer doctors, longer waiting times and increased crowding."

Mississippi's 2012 admitting-privileges law, House Bill 1390, required all physicians associated with an abortion clinic to have admitting privileges at local hospitals. Similar "trap laws" had been circulating through state legislatures around the country, and the clinic and one of its doctors sued.

Plaintiffs said that House Bill 1390 "violates the liberty interests of Plaintiffs' patients, as guaranteed by the 14th Amendment, because it imposes a substantial obstacle in the path of women seeking pre-viability abortion."

The 5th Circuit and the U.S. Supreme Court have set precedent and now agree with that statement, four years later.

In her concurring opinion on the Whole Woman's Health case, Justice Ruth Bader Ginsburg wrote, "When a State severely limits access to safe and legal procedures, women in desperate circumstances may resort to unlicensed rogue practitioners, faute de mieux, at great risk to their health and safety."

Not all U.S. Supreme Court justices agreed, however; the vote came down 5-3. In his dissent, Justice Clarence Thomas criticized the court.

"If our recent cases illustrate anything, it is how easily the Court tinkers with levels of scrutiny to achieve its desired result," he wrote. "This Term, it is easier for a State to survive strict scrutiny despite discriminating on the basis of race in college admissions than it is for the same State to regulate how abortion doctors and clinics operate under the putatively less stringent undue-burden test."

Mississippi Republican leaders, who supported and helped pass a bill aimed at defunding Planned Parenthood—limiting Medicaid payments for health services at the Hattiesburg clinic that does not do abortions—voiced disapproval over the U.S. Supreme Court's decision last week.

"I am disappointed in the U.S. Supreme Court's decision today," Gov. Phil Bryant tweeted. "This measure is designed to protect the health and safety of women who undergo this potentially dangerous procedure, and physicians who provide abortions should be held to the same standards as physicians who perform other outpatient procedures."

"The U.S. Supreme Court's decision today endangers the lives of women and their unborn children in Mississippi and all across America," Reeves said in a statement. "States should have the ability to protect their citizens through proper regulation of medical care."

"I'm disappointed with the decision made by the U.S. Supreme Court," said Gunn in a statement.

"The legislation struck down today is designed to protect women and their unborn children. For those of us who believe in the sanctity of human life, this ruling is a major setback."

From start to finish, defending and appealing the JWHO lawsuit from June 2012 to April 2016 cost the state, specifically the attorney general's office, $117,000 not including consulting time or payment.

The Impact on JWHO

Pro-abortion rights advocates might be able to breathe a bit easier for now, but a bill the Legislature passed this session still affects JWHO, by blocking "any entity that performs nontherapeutic abortions" or group affiliated with such an entity (like Planned Parenthood) from receiving Medicaid reimbursements.

Federal funds cannot be used to pay for abortions, however, so this law would prevent both JWHO and the Planned Parenthood clinic in Hattiesburg from receiving Medicaid reimbursements for offering services such as birth control or STD testing.

Planned Parenthood Southeast has filed a federal lawsuit in response to the law, as the organization has in several other states, successfully blocking similar measures.

Hancock says the law that went into effect July 1 affects JWHO, which started offering birth control and other reproductive health-care options to women with Medicaid reimbursements in November.

"While we're glad the health center remains open, we're deeply concerned that this law passed in the first place and hope it will ultimately be struck down. We all want to protect patient safety, but admitting privileges won't do that. Abortion providers have rigorous standards and training for staff as well as emergency plans in place because women's safety is our first priority," Fox said in a statement.

"Data, including from the Centers for Disease Control and Prevention (CDC), shows that abortion has over a 99 percent safety record. There is absolutely no medical basis to require abortion providers to have local hospital admitting privileges."

At JWHO, it is business as usual, for the most part. Hancock said a new wave of protesters seemed to crop up at the start of 2016, but since the Supreme Court's ruling, things have been quiet.

Five Pink House Defenders were there just in case there were a lot of protesters, but beyond six or seven in the morning, Hancock said things were relatively quiet. As a pro-abortion-rights activist, Hancock knows this is not the end.

"This (Supreme Court) decision is going to help as far as defining what an 'undue burden' is," Hancock said. "But it's still not going to stop the trap laws ... the fight's not over."