Abortion Clinic Gets Reprieve; Will It Last? 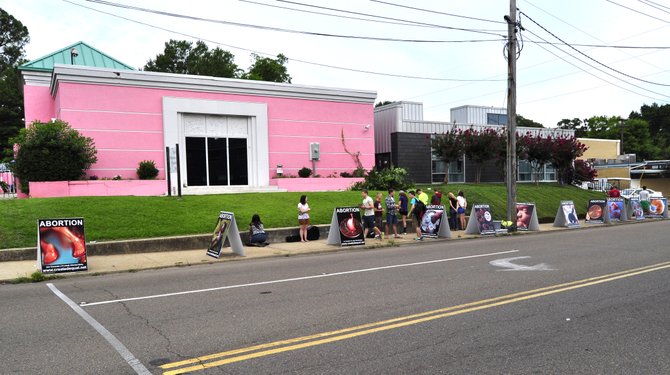 The Jackson Women’s Health Organization celebrated a major victory when the 5th U.S. Circuit Court of Appeals struck down an admitting-privileges law that would have closed the clinic down. Photo by Trip Burns.

An effort to close Mississippi's last abortion clinic hit the wall on Tuesday, July 29, when two of three judges on a 5th U.S. Circuit Court of Appeals panel determined that the law was unconstitutional because it would force women to travel across state lines to exercise their right to have the procedure.

The decision only applied to the case in Mississippi, where the law required Jackson Women's Health Organization to have hospital admitting privileges that they were unable to obtain. The same court upheld an identical law in Texas months earlier.

In Planned Parenthood v. Casey, the U.S. Supreme Court held that states could restrict abortions before viability of the fetus—when it is able to survive outside of the mother's womb. Under Casey, states cannot enact laws that have the purpose or effect of imposing an "undue burden" on women seeking abortions. The Casey decision describes an undue burden as a "significant obstacle."

Jonathan Will, a Mississippi College School of Law professor and health-law expert, said that even if a law does not actually create an obstacle for women seeking abortions, it would be unconstitutional under Casey if the court found the law had the purpose of imposing an undue burden.

The intent of what started as HB 1390 in the Mississippi Legislature become a central focus of opponents to the law as many of the policy makers who pushed the legislation made no secret of their objective.

"My goal, of course, is to shut it down," Gov. Phil Bryant once said of JWHO when discussing abortion restriction laws at a pro-life luncheon in 2013.

Earlier, the 5th Circuit found that a Texas admitting-privileges law did not place an undue burden on women, even though the law resulted in the closure of nearly 20 abortion clinics across the state.

Will said the court in Texas did not "perform the more rigorous type of purpose inquiry that Casey seems to require." Instead, they used the rational basis review, by which every law must be tested, to determine if the law was related to a legitimate government interest.

"In the abortion context, it's not that simple," Will said. "The rational basis review is doing the work of the purpose prong of Casey, and what many would argue, inappropriately so."

The 5th Circuit court in the Mississippi case was bound by what the 5th circuit held in the Texas case, which is that this type of law survives rational basis.  However, Will said, "the purpose prong in Casey ought to be more stringent than rational basis review; otherwise, why have a separate test?"

The 5th Circuit court, however, found that the law in Mississippi did have the effect of placing an undue burden on women because they would be forced to travel out of state to get an abortion.

Crossing state lines, according to the decision, constitutes an undue burden even though the distance a Mississippian would have to travel to get an abortion out of state is shorter than the stretch of land in Texas left with no abortion clinics due to the law.

Jolly cited State of Missouri ex rel. Gaines v. Canada, an equal protection case from the 1930s, to make the claim that Mississippi cannot extinguish a woman's right to have an abortion within its borders.

The court then never had to address the purpose of the Mississippi law because they already determined the law had the effect of an undue burden.

Matt Steffey, a constitutional expert at Mississippi College School of Law, said the court essentially looked at the law on a state-by-state basis.

"It would be unprecedented, I think, for a state to be able to shirk the Constitution by externalizing it to another state. Because constitutionally speaking each state is autonomous," Steffey said.

Applying Gaines in this case, Garza wrote, "implies that we must confine our undue burden analysis to Mississippi. Such an inference is legally nonsensical: No such rule exists."

Under Casey, the state does not have an obligation to make abortion available.

"The right to choose to have an abortion is an interesting right," Will said. "Equal protection is a demand that imposes an obligation on states to treat the citizens equally—to not discriminate. That's not what the abortion right is."

The court decision will allow Jackson Women's Health Organization to continue operating. To overturn the ruling, the State of Mississippi would have to request for en banc consideration, or for the entire 5th U.S. Circuit Court of Appeals to review the case, in which case, Steffey said, there is a good chance the decision would go the other way.

In response to the decision, Bryant said, "It is important to note that today's opinion was issued by a divided panel of judges and not by the entire 5th Circuit and that this action is just another part of the legal process. I will continue working with the attorney general as his office petitions the entire court to hear this case."

For now, Steffey said, the ruling is a victory for the clinic.

"I think this opinion makes it impossible to enforce this law against this clinic," Steffey said.