The police stood near Jackson Women's Health Organization, the last abortion clinic in Mississippi, on July 17 as Mike Peters picked up each of the large portable signs and took them to his building's basement./File Photo Photo by Trip Burns. 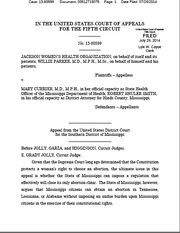 The 5th U.S. Circuit Court of Appeals has ruled against a Mississippi law that would have required the state's only abortion clinic to obtain admitting privileges at a local hospital for its OB/GYNs.

The Jackson Women's Health Organization was unable to obtain the privileges and challenged the constitutionality of the law in court and succeeded in obtaining an injunction against the law in federal court.

The court only found the law unconstitutional as it was applied in Mississippi to the last abortion clinic, since it would have made abortion inaccessible in the entire state.

According to the standard set forth in Planned Parenthood v. Casey, a state cannot create laws or regulations regarding abortion that has the purpose or effect of imposing an "undue burden," defined as a "substantial obstacle in the path of a woman seeking an abortion before the fetus attains viability."

The court ruled that traveling outside of Mississippi to get an abortion constitutes an undue burden for residents of the state, even though the 5th U.S. Circuit Court of Appeals upheld an identical law that closed abortion clinics in Texas. In that case, the law left a stretch of land with no abortion provider that is more miles than the distance Mississippians would have to travel to go out of state.

Matt Steffey, constitutional expert at Mississippi College School of Law, said this is because the court looked at the law on a state-by-state basis.

"It would be unprecedented, I think, for a state to be able to shirk the constitution by externalizing it to another state. Because constitutionally speaking each state is autonomous," Steffey said.

"As a result, we hold that JWHO has demonstrated a substantial likelihood of success on its claim that H.B. 1390’s admission-privileges requirement imposes an undue burden on a woman’s right to choose an abortion in Mississippi, and is therefore unconstitutional as applied to the plaintiffs in this case. Finally, we hold that, to the extent the district court’s preliminary injunction enjoined enforcement of H.B. 1390 against parties other than the plaintiffs in this case, it was overly broad and is modified to apply only to the parties in this case. Accordingly, the judgment of the district court granting the preliminary injunction is affirmed."

The court did not argue about the purpose of the law under the Casey standard, "which would be much more contentious," Steffey said, because they determined first that the effect of the law did, in fact, present an undue burden.

The Center for Reproductive Rights, which represented JWHO, said the ruling "ensures women who have decided to end a pregnancy will continue to have access to safe, legal care for now in their home state."

Nancy Northup of the CRR added of today's apparent victory: “But there is still only one clinic in the entire state, and it is still threatened by a law advanced by politicians over the opposition of respected medical associations, with the sole intent of closing that clinic permanently."

The court ruling allows Jackson Women's Health Organization to continue operating. To overturn the ruling, the State of Mississippi would have to request for an en banc, or for the entire 5th U.S. Circuit Court of Appeals to review the case, in which case Steffey said there is a good change the decision would go the other way.

For now, Steffey said the ruling is a victory for the clinic.

"I think this opinion makes it impossible to enforce this law against this clinic," Steffey said.