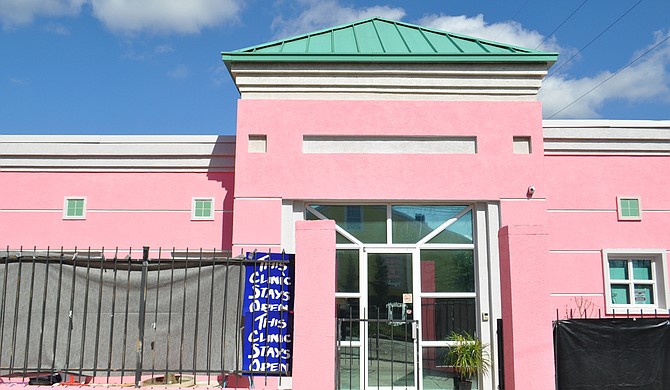 In papers filed Thursday with the Supreme Court, clinic attorneys said the 5th U.S. Circuit Court of Appeals was correct to block a 2012 Mississippi law that would require every physician working at the abortion clinic to obtain privileges to admit patients to a local hospital. Photo by Trip Burns.

JACKSON, Miss. (AP) — Attorneys for Mississippi's only abortion clinic are asking the U.S. Supreme Court not to review a lower court's ruling that is keeping the clinic open.

In papers filed Thursday with the Supreme Court, clinic attorneys said the 5th U.S. Circuit Court of Appeals was correct to block a 2012 Mississippi law that would require every physician working at the abortion clinic to obtain privileges to admit patients to a local hospital.

A U.S. district judge in Jackson let the law take effect in 2012 but barred the state from closing the clinic, Jackson Women's Health Organization, while its physicians tried to obtain admitting privileges.

The state asked 5th Circuit Court of Appeals to overturn the district judge's ruling, and the appeals court ruled in July 2014 that the law could cut off access in Mississippi to a constitutionally protected medical procedure by closing the state's only abortion clinic.

Throughout the legal fight, the clinic has remained open.

Several other states, including Texas, have enacted laws requiring doctors at abortion clinics to obtain hospital admitting privileges. In some cases, courts have allowed those laws to go into effect. Supporters say such laws protect women's health, but opponents say complications from abortion are rare and hospitals are already required to admit emergency patients.

Three attorneys for the Mississippi clinic, including Robert McDuff of Jackson, wrote in the Thursday filing that the Mississippi case "does not squarely present the question of whether admitting privileges requirements in general are constitutional."

"To the contrary, the 5th Circuit has upheld a different state's admitting privileges law, when the consequences of that law would not have resulted in the closing of every abortion clinic in the state," they wrote, referring to the Texas law. "If the (Supreme) Court would like to consider the constitutionality of admitting privileges laws generally, it should await a case that presents that question."

When Republican Gov. Phil Bryant signed the admitting-privileges law, he said he wanted to end abortion in Mississippi.

State Attorney General Jim Hood filed papers in February asking the Supreme Court to overturn the appeals court's ruling. Hood, a Democrat, wrote that the 5th Circuit decision "effectively places the clinic beyond the regulatory reach of the state."

"Mississippi was one of many states to enact an admitting privileges requirement for abortion doctors, but there are two important distinctions in Mississippi: for several years Mississippi had already required doctors performing outpatient procedures other than abortion to hold admitting privileges, and Mississippi currently has only one licensed abortion clinic, which complains that it cannot comply with a rational health and safety regulation," Hood wrote.

The clinic attorneys wrote that Mississippi law does not require an abortion clinic to be regulated as an ambulatory surgical facility. They said state officials are wrong to assert that abortion clinic physicians should be required to obtain hospital admitting privileges because physicians in outpatient surgical clinics are required to have them.

"Thus, instead of eliminating an 'exemption,' the requirement adds another regulation to the web of regulations imposed on the clinic, one that ultimately proved impossible for the clinic and its physicians to satisfy despite their best efforts," the abortion clinic's attorneys wrote.

The clinic's attorneys also wrote that Mississippi physicians who perform "similar or less safe surgical procedures in their offices," such as colonoscopy, hernia repair and hemorrhoid removal, are not required to have hospital admitting privileges.