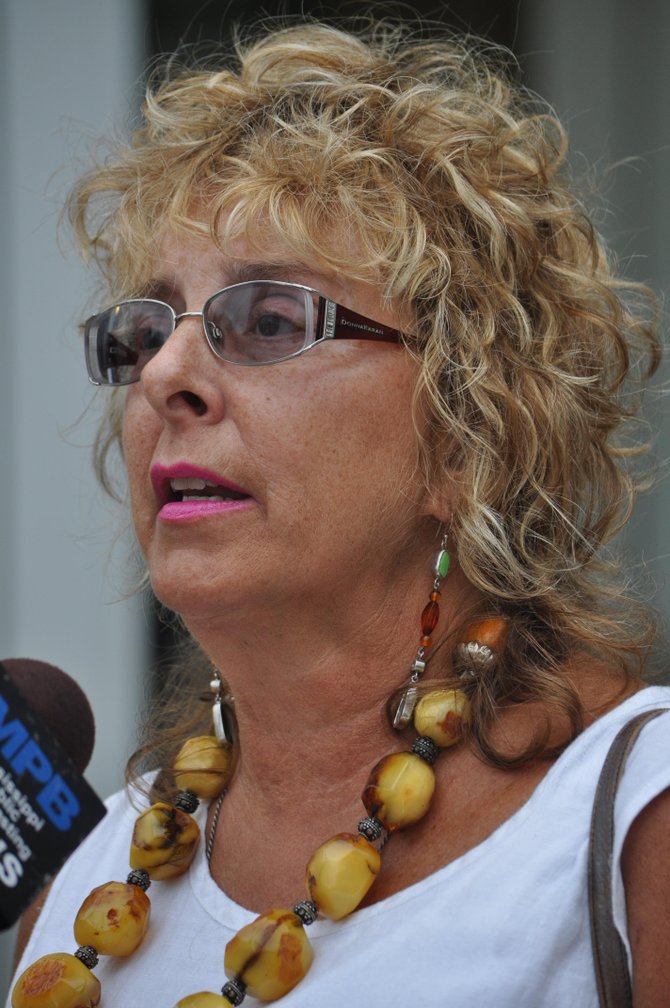 Diane Derzis, the owner of the clinic, speaks with MPB after the hearing.

Is it medically necessary for doctors to have hospital admitting privileges? The question lies at the heart of the ongoing fight between Mississippi's last abortion clinic and state officials who created new regulations that include requiring doctors who perform abortions to have admitting privileges. It could shut the facility down.

Diane Derzis, who owns the Jackson Women's Health Organization off North State Street, said only the clinic's backup doctor, who does not perform abortions, has hospital admitting privileges while the clinic's other two doctors have not been able to obtain privileges. She also said the clinic has applied to seven hospitals within a 25- to 30-mile radius from Jackson.

State officials who pushed for the mandate say the law is intended to protect women who might suffer complications while having an abortion. On the other side is the Jackson Women's Health Organization, which sued the state in federal court to block the law from going into effect. In court filings, the clinic's attorneys called the regulations "medically unjustified" and feared its doctors might be open to criminal prosecution while its paperwork for admitting privileges was processed.

Then, there's the truth. Jonathan F. Will, director of the Bioethics and Health Law Center at Mississippi College School of Law, said hospitals grant admitting privileges as a measure of quality assurance, but that it's unnecessary for an abortion doctor to have admitting privileges to get a patient into a hospital if she needs to go.

Likewise, if someone complains of stomach pains to their family doctor, who diagnoses the cramps as appendicitis, the family physician is unlikely to be the one who performs the appendectomy at the hospital.

Because the U.S. Supreme Court prohibited outright abortion bans in Roe v. Wade, abortion unfriendly state legislatures have increasingly turned toward piling regulations on the clinics as a way to slow them down. Doing so is permissible, the U.S. Supreme Court ruled in Planned Parenthood Southeastern Pennsylvania v. Casey in 1992—up to the point the restrictions cause an undue burden and substantial obstacles to women who want to get abortions.

In his ruling handed down late last week, U.S. District Court Judge Daniel Jordan allowed the state law, which Gov. Phil Bryant signed in April, to take effect while the clinic seeks admitting privileges and before he determines if the law causes irreparable harm to the clinic.

"Given the highly charged political context of this case and the ambiguity still present, the Court finds that there would be a chilling effect on the Plaintiffs' willingness to continue operating the Clinic until they obtained necessary privileges. Therefore, an irreparable injury currently exists," Jordan's order states.

"As for the other factors for injunctive relief, the Court finds that there exists a substantial likelihood of success on the merits and that the threatened injury—the closure of the state's only clinic creating a substantial obstacle to the right to choose—outweighs any harm that will result if the injunction is granted. This is especially true in light of the Defendants' promises that they have no intention to pursue civil or criminal sanctions at this time."

JWHO's operators have maintained all along that the new regulations grew out of a desire of elected officials to reap political benefits from shutting down the state's last abortion clinic.

At a two-hour-long hearing last week, Jordan heard arguments from the clinic and the state. The state attorneys defending the new law said the Mississippi governor and lieutenant governor's statements about the law eliminating abortion in the state shouldn't matter because they did not author or vote on the controversial legislation, HB 1390.

Jordan found the statements relevant "considering they came from the governor who signed the bill and the presiding officer over the Senate." In his July 1 order, Jordan questioned the motive of the bill's backers—pointing out that they seem more focused on eliminating access to abortion, a constitutional right, than in protecting the health of women.

At the July 11 hearing, state attorneys urged Jordan to look only at the bill's language for its intent, and not at public officials' language about its motive.

Rep. Sam Mims, R-McComb, who sponsored HB 1390, took issue with the plaintiffs' characterization that political gamesmanship was at the heart of the anti-abortion bill and noted that it passed with bipartisan support.

Will, the law professor, agrees with the state that it doesn't matter if officials said they want to end abortion in Mississippi. The only standard is whether the new law represents an "undue burden" or "substantial obstacle" to women seeking abortions.