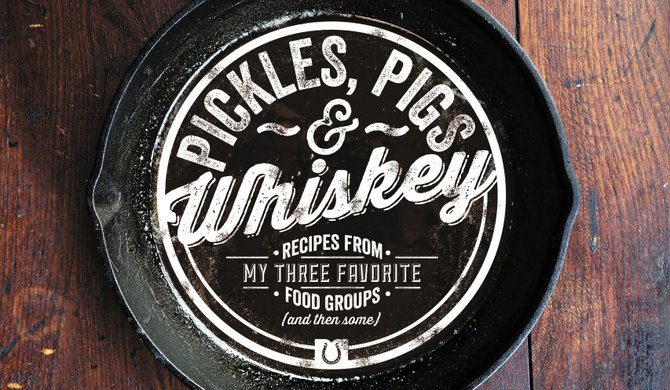 When I think back to the cookbooks that inhabited my mother's kitchen while I was growing up, I remember thick, hearty tomes with recipe after recipe. They were workhorses—you'd pull them out, look up a dish in the index, flip to the appropriate page, follow directions and then tuck them away once dinner was ready. "Pickles, Pigs and Whiskey: Recipes from My Three Favorite Food Groups and Then Some" isn't that book. The cookbook, Oxford chef John Currence's first, is as much a manifesto—even a memoir—as it is an instructional guide.

In fact, Currence spells out his cooking manifesto before we get to the first recipe. It includes advice such as make your own bread, buy quality ingredients, cut the "low-fat" crap and enjoy yourself. The book is written in that irreverent, in-your-face Currence style we've come to know and love—instead of a foreword, the cookbook offers "Foreplay by John T. Edge."

Currence has a voice, and it's clear on every page of this book. Suggestions of music to listen to with certain dishes are sprinkled throughout, and most recipes come with an exploration of the history of that food, or how it is intertwined with Currence's personal history.

Once we get to actual chapters, the book begins (as all civilized things do) with drinks, which keeps with the overall theme of enjoying the process of cooking throughout this book. Chapter one—Stirring, Shaking and Muddling—covers 13 craft cocktails, ranging from a "Smoked" Sazerac to a Deadliest Sin Champagne Punch. I didn't exactly have the ingredients for the Absinthe Frappe, but I tried my hand at the Rosemary-Cherry Lemonade, and it was a huge success (especially after adding a bit o' vodka).

This is definitely what I consider an aspirational cookbook—meaning, for me, it operates at a pretty advanced knowledge of food and technical cooking skill. It scoffs at using certain low-brow ingredients, although admits that certain grocery-store staples have no substitute.

The book is filled with recipes incorporating ingredients I have never used—like proteins such as quail and rabbit and veal. But that makes sense, as Currence still holds the culinary crown in Mississippi as our state's most recent winner of the James Beard Award, which he won in 2009 in the Best Chef: South category. If I'm buying a cookbook from a James Beard-level chef, I want that level delivered.

To me, the book represents an unwillingness to dumb-down challenging recipes. But that means this cookbook isn't necessarily for everybody. I decided to ease into things with the Whole-Grain Guinness Mustard, and even that felt very elevated from my usual cooking level, although it definitely made my standard turkey sandwich taste better. I'd love to attempt the Spicy Pepper Jelly and learn more about pickling (another great aspect of this book is how it digs into explaining certain techniques), but it's not one I'm going to dog-ear when planning dinner each week. And that's OK.

In the end, as much as this is a book of recipes, it is more a book about a man and his life and his Mississippi. Edge puts it wonderfully in his introduction: "Lots of chefs who write books declare that their cuisine is very personal. Half the time, I don't buy the rhetoric. This time I do. John Currence has written a book that sounds like him, a book that smells like him, with recipes that conjure his past and his present and pay homage to the place he calls home."