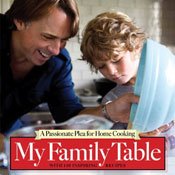 John Besh shows his love for New Orleans and its cuisine with his latest cookbook.

Gastronomes across the country, especially those with a penchant for Creole cuisine, know the name John Besh. The man has cemented himself as a pillar of the New Orleans restaurant world, and as an advocate for young chefs and Gulf Coast seafood conservation. His restaurant empire spans from Restaurant August in the Central Business District to La Provence on Lake Pontchartrain's North Shore and now to San Antonio with an outpost of his Brasserie Lüke.

Beyond owning and operating restaurants, Besh has also appeared as a "Top Chef" judge and a "Top Chef Masters" contestant. More than 200 public-television stations around the country air his cooking show, "My New Orleans."

Besh released his second cookbook, "My Family Table: A Passionate Plea for Home Cooking" (Andrews McMeel Publishing, 2011, $35), in November. This volume begins with a plea for families to shun salt- and sugar-laden packaged foods, to ignore manufactured convenience and to "cook real food instead." It's an admirable mission, and Besh even takes pot shots at food fanatics who "fetishize celebrity chefs" and ignore their own kitchen.

From the start, "My Family Table" is a stark departure from Besh's first cookbook, "My New Orleans" (Andrews McMeel Publishing, 2009, $45). In it, Besh paid homage to his hometown and its rich culinary tradition. "My Family Table" respects that tradition, but it attempts to simplify and streamline the flavors while incorporating more of what makes up modern New Orleans cuisine.

This modern approach is evident in the section titled "The Essential Pantry," which gives equal billing to harissa, hoisin sauce, sambal and rice wine vinegar as it does to familiar ingredients such as grits, pasta, Arborio rice and olive oil.

Hoping to entice busy families to cook on weeknights rather than order pizza, Besh has a two-part system. The first step comes to life in the chapter "Sunday Supper." With families typically having more time in the kitchen on a Sunday afternoon, the idea is to cook large cuts of meat such as slow-roasted pork shoulder, herb-roasted chicken and slow-cooked beef chuck roast. With the exception of the chicken, most of these recipes require little prep work and are far from fussy. I exclude the chicken because, regardless of the seasoning, without fastidious attention to the temperature of the meat, things can go from juicy and succulent to stringy and dry in a flash. That being said, Besh's herb-roasted chicken recipe is easy to prepare and a solid contender for the Sunday dinner table.

I found another stumbling block in the "Sunday Supper" section: the slow-cooked beef chuck roast. In this recipe, the cook takes a 5-pound chuck roast, seasons and sears the meat, and then roasts it on a bed of vegetables in a low oven for one hour and 15 minutes or until it is a rosy medium rare at 125 degrees. While this procedure would work beautifully with a tender cut like prime rib, it falls flat with chuck. Even with the lightly marbled, grass-fed Charolais beef that Besh recommends in the book, the results will be pretty, but little more than a chewy hunk of meat over a bed of undercooked vegetables.

Disastrous as the chuck roast may be in its original form, beef comes into its own in the chapter "School Nights." Working with leftovers from "Sunday Supper," dinners take minutes instead of hours. Two cups of diced meat from the herb-roasted chicken is easily transformed into an Asian chicken salad full of the bold flavors of basil, cilantro and mint. Even the chuck roast redeems itself in a hearty baked pasta dish. What was once chewy becomes a rich component of a pasta casserole that is on the table in less than an hour.

For those worried that Besh has lost his New Orleans touch, never fear. "Jazz Brunch" features new takes on some old favorites. Gone are the Canadian bacon, English muffin and ordinary hollandaise sauce of eggs Benedict. For his version of the classic poached-egg dish, Besh uses crab cakes and a decadent satsuma hollandaise. Garlicky baked oysters offer the best of the Gulf, and the crown roast of pork with dirty rice dressing revives a favorite Cajun side.

"My Family Table" contains stunning photographs and, mostly, well-planned recipes. It is another excellent cookbook from a man eager to share his love for food and his home with his readers.

In the aftermath of Hurricane Katrina, Besh established himself as a representative of New Orleans and Louisiana, and he's done it with a passion for his craft and a hearty smile. While some of the recipes in "My Family Table" may take a few attempts to perfect, it's a solid addition to any bookshelf.