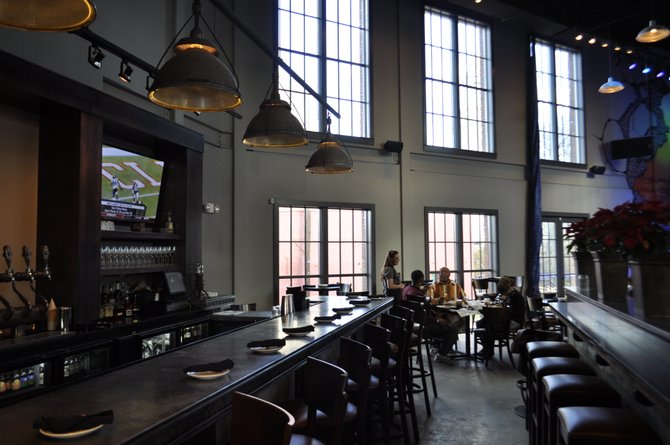 After remaining vacant for years, The Iron Horse Grill finally reopened its doors in 2013. Photo by Trip Burns.

Chef Pierre Pryer Sr. raises the grates that control the temperature on the charcoal grill at the Iron Horse.

Jackson, like many southern cities, is no stranger to rising from the ashes. During the Civil War, General William T. Sherman and his Union troops visited Jackson so often that the city earned the name "Chimneyville" for the number of buildings Sherman's troops burned, leaving only the chimneys standing. In the decades that followed, Jackson slowly became the capital city that we know today.

While invading forces may have not burned The Iron Horse Grill (320 W. Pearl St. 601-398-0151), the restaurant fell victim to fire twice. The Iron Horse remained vacant for years after the second fire in fall 1999. Recently, the restaurant reopened its doors, and Chef Pierre Pryer Sr. wants to set the standard for southwestern cuisine in the city.

For many, The Iron Horse Grill carries fond memories of house fried tortilla chips dipped into bowls of cilantro- and chili- studded salsa, sizzling platters of fajitas and a habanero cream sauce that was to die for. Luckily, Pryer is just the man to rekindle those memories.

Pryer began working at the Iron Horse in 1987, just six months after the restaurant opened. Working his way from dishwasher to kitchen manager in less than a year, Pryer has an intimate knowledge of everyone's favorites from the first incarnation of the Iron Horse.

"We've had a lot of requests for our old items to come back, especially salsa and the habanero pasta that I'm famous for making," Pryer says. "When I worked at Country Club of Jackson, one patron wrote the paper asking where was the guy who made the habanero cream sauce at the Iron Horse. They were told I worked at the Country Club of Jackson, and they could reach me there, and I could make it for them. So I've got the art still. ... The stuff patrons loved, we're going to bring (it) back."

With the smell of mesquite wafting from the charcoal-fired grill, the new Iron Horse has more to offer than just a return of the old favorites. "We'll take some of the old favorites and put a new twist on it, like the crawfish enchilada," Pryer says. "We've got new dishes, like the stuffed catfish. We had grilled catfish back then, but we've got a pecan-crusted catfish now, and the patrons will really enjoy that."

Original Iron Horse patrons may experience a sense of deja vu upon walking in, but the restaurant is just as much new as it is old and familiar. The Iron Horse's motto is "Charcoal and Music." A look at its event calendar shows that the music part is no issue, but Pryer decided to make a change when he returned to the Iron Horse kitchen. "My plan is to go away from lump charcoal and back to briquettes," he says. "We still use wood, particularly mesquite, oak, and hickory. Mesquite is the wood of choice, but it's expensive to get in from Texas so, other than that, we use local woods."

Just as the post-Sherman Jackson wasn't rebuilt in a day, it will take a little time for Pryer to set the kitchen his way, but the Iron Horse Grill's return brings excitement to Jackson. Like many diners stepping foot into the new Iron Horse, Pryer was stunned.

"When I first walked through these doors, it just took me away," he says. "I was totally blown away with the renovations they've done here, and the fact that it's open again. The Iron Horse meant so much for me; it was the beginning of a great career." It seems that Pryer's career has come full circle, and he'll be doing his best to make sure that  "downtown is back."

No one could have been happier to hear that Iron Horse was re-opening than me. I loved it so much back in the 80's and 90's that I even had my bachelor party there. The new Iron Horse is a beautiful building with a great feel to it, but unfortunately, it is NOT the Iron Horse I was hoping it would be. I think it is wrong to even call it the Iron Horse because the food is so different. Either the menu should begin to resemble the old one, with a few new items mixed in here and there, or either the name should be changed. The salsa was sugary sweet and the fajitas don't even come with sour cream or cheese or pico. The music was nice, and the building is pretty, but the menu is seriously disappointing.

@BSmith: Go back in. They re-hired the old chef just recently and word on the street (by which I mean Twitter) is that a lot of the old stuff is coming back and we've heard good stuff about the food. Give 'em another chance and let us know what you think!