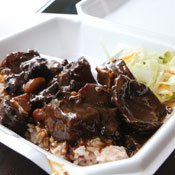 Oxtails are an uncommon, yet flavor-packed, cut of beef.

The world of food is riddled with the contributions of countless cultures, languages, and centuries of morphing and modification. One such area that has been especially touched by language is the art of butchering, specifically when it comes to cattle. There is a lack of a worldwide standard for naming cuts. A butcher who has been trained in America looks at a chuck and takes out a flat iron steak, a British butcher removes a Butlers' steak, and an Australian butcher cuts an oyster blade steak––but each person will have removed exactly the same cut of beef. However, there's little mystery behind the name "oxtail." While this cut is no longer solely the byproduct of oxen, oxtail is simply the skinned and sectioned tail of a cow.

To the uninitiated and unadventurous, the oxtail can be a daunting cut of meat. With a bone in the middle and cylinders of meat surrounding it, oxtail is far from the most appetizing of the supermarket cuts. However, locked in this segmented appendage is some of the most dense beef flavor you will ever find––if you have the patience to unleash it.

Outside of the odd hamburger meat combinations such as ground brisket, oxtail and sirloin, nearly every recipe involving oxtail––typically for a soup, stew or risotto––takes hours to prepare. In Italy, the oxtail is combined with onions, garlic, pancetta and plenty of celery to become the center of the stew, "coda alla vaccinara." In Korea, oxtail plays the starring role in the simple but warming broth, "kkori gomtang," while the Chinese stew oxtails with tomatoes, carrots and ginger to make their soup, "niú-wi-tng."

Unfortunately, the market for oxtails in Jackson is woefully small and leaves you with basically two options. The first is to try your hand at cooking them at home. Easily found in the meat section of grocery stores and butchers such as McDade's (multiple locations, 601-713-4178) and Paul Anthony's Market (4500 Interstate 55 Frontage Road N., 601-981-7559), oxtails are the perfect cornerstones for beef broth.

At his Caribbean outpost, Richard Higgins brings his version of Jamaican oxtails to the hungry office workers of downtown Jackson. Enlisting the help of a pressure cooker, Higgins combines oxtails, onions, green onions, butter and thyme with a little bit of water, then gives the flavors time to meld, allowing the richness of the oxtail to permeate the broth.

After 10 minutes of pressure-cooking, the oxtail is left to simmer until tender. When the meat has reached the right, tender consistency, Higgins whisks in a cornstarch slurry to thicken the gravy and then spoons the oxtails into a steamer tray for the lunch rush. When a customer arrives and orders the oxtails, it's a relatively anticlimactic affair. Styrofoam takeout box in hand, Higgins first adds a layer of rice and red kidney beans, ladles on a generous serving of oxtails and gravy, and finishes with a side of bok choy.

Although the humble oxtail may not be the most glamorous lunch option, the first bite will change almost any mind. There may not be an overwhelming amount of meat on each piece, but what is there is supremely tender and unbelievably rich in beef flavor. When combined with thick gravy and rice and beans, the oxtails in this dish are a celebration of meager ingredients and the delightful conversion of tough, stringy collagen to unctuous gelatin.

However, there is more than meets the eye with Taste of the Island's oxtails. Although Higgins listed onion, green onions, butter and thyme as ingredients in his oxtails, there is a "mystery ingredient." Higgins says his oxtails include "a special Jamaican seasoning." What's in this special seasoning? Higgins was in no mood to tell, and your guess is as good as mine.

While the final ingredient may remain a mystery, it's no secret that the oxtails at Taste of the Island are worth seeking out even if you're a bit squeamish over the idea of eating the far end of a steer. Even if you're not in the mood for oxtails, you'll find something at Taste of the Island to please your palate. But why not take a chance and get an order of Higgins' oxtails for lunch? It just may change your idea of quality beef forever.