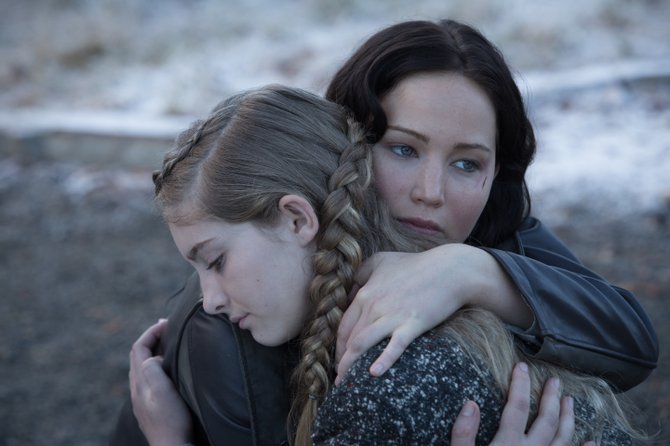 Like the first installment of this blockbuster franchise, "The Hunger Games: Catching Fire" reads as a parable on the gluttonous excesses of the establishment verses the downtrodden poor. Fear keeps the 12 districts surrounding the Capitol of Panem shackled to servitude, poverty and a joyless existence. While the "me-and-only-me" establishment stomps out the slightest ember of hope among the masses, a symbol arises from the ashes in the form of a fine strapping young woman named Katniss Everdeen (Jennifer Lawrence).

Katniss symbolizes the first crack in a foundation built on fear and repression. Those who have read the books or seen the first movie know that Katniss stood her ground during her first Hunger Games, where she volunteered to take her sister's place as a "tribute" for district 12. Since then, Katniss has built a loyal following, both on and off screen.

This film, directed by Francis Lawrence ("I Am Legend," "Water for Elephants") from Suzanne Collins' best-selling books, throws out a three-finger salute to change, progress and protecting people from the oppression of tyranny—themes that typically work in movies, as they are the lifeblood of revolution. Liberty, equality and fraternity!

The story opens with Katniss creeping around the woods. Her Artemis-like bow and arrow stick to her back like an appendage. She sneaks a kiss, not from Peeta Mellark (Josh Hutcherson) with whom she has a "public" romance, but with Gale Hawthorne, the guy next door (Liam Hemsworth).

President Snow (Donald Sutherland), a cunning graybeard, pays a visit to the hinterlands that Katniss calls home. He warns her that he will kill everyone she loves if she cannot convince the masses of her complete and transcendental love for Peeta during the Victory Tour. She fails. The new master of the games (Philip Seymour Hoffman) devises a punishment. For the 75th Hunger Games, each district supplies their yearly "tributes" from a pool of former victors. Twenty-four past champions, including Katniss and Peeta, are hustled together to fight to the death in a tropical island "arena" where hidden cameras capture every move.

The television production of the 75th Games is as decadent as the previous year as Caesar Flickerman (Stanley Tucci) works up the competition.

The costumes of Panem's ruling class are garish and spectacular. Effie Trinket (Elizabeth Banks) is back to run the Victory Tour, and her wardrobe choices and cosmetics express the ultimate in decadence. Effie and others in the ruling class are painted in bright colors, whereas Katniss and the other tributes are sepia-toned. Which is more real?

In this film, the tributes seem to be more self-aware. They are veterans of the game. They hold hands in defiance of the authority. And the jaded TV audiences of Panem do not seem as enthusiastic about watching heroes of the games die—it would be like gathering all of the top Olympic athletes and having them kill each other off.

There are lots of hunting-and-surviving scenes, with killer mist, killer baboons, killer waves and other types of killing. These scenes seem long, but are watchable because we have been conditioned by reality television to violent banality.

Lawrence brings strength, courage and pathos to the role. She's a major talent, and her strength comes from a salt-of-the-earth persona. "Catching Fire" succeeds because the story is mythic and the cruelty easy to imagine. The A-listed cast lifts the material from a dusty cliche. With a wild turkey hunt, the movie is also appropriately seasonal.