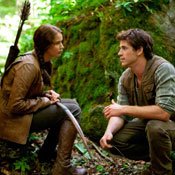 "The Hunger Games" portrays a futuristic nightmare where indentured masses, working in 12 districts, feed and entertain a parasitic society. The powers-that-be leech anything of consumptive value from the districts and hover-craft it into the Capitol, the central city of Panem.

Opulence and garish colors define the Capitol's finest residents. Their over-indulgence and false laughter linger in a thick muggy atmosphere of spoiled privilege. In contrast, the districts are monochromatic and bleak. White-uniformed peacekeepers patrol the streets and punish even the slightest whiff of non-conformity.

During the annual reaping, each district sacrifices two tributes, a male and female between the ages of 12 and 18, for the Hunger Games, a mishmash of "American Idol," "Survivor" and the Olympics. The big event is held in the Capitol, and no words convey less goodwill than wishing a tribute a "happy Hunger Game." All but one will die.

Maybe it's the freakishly dyed and poofed hair of the TV personalities hosting the games, but there's a bit of dystopian Oz going on in Gary Ross' film adaptation of Suzanne Collins' bestselling novel. But then, when you really think about it, Oz may have been in Technicolor, but it was definitely a creepy place. Dorothy was no saint, having killed her opponent (the Wicked Witch of the West) to get back home.

Old promotional materials for "The Wizard of Oz" describe Dorothy as an "innocent farm girl whisked out of her mundane earthbound existence into a land of pure imagination." Dorothy's journey takes her to emerald forests, yellow brick roads and creepy castles. Killer monkeys try to stop her, but fail. Dorothy takes out not one, but two evil witches who threaten the little people of Oz. Add some songs, a tin man, a scarecrow and a lion, and you have a classic.

Leap into the future, after war has ravaged the United States and led to the creation of Panem. There you find Katniss Everett (Jennifer Lawrence). She is an innocent coal-miner's daughter whisked out of her hard existence into a game of pure imagination, where she must kill or be killed in a reality show engineered with emerald-green forests and genetically modified killer wasps with psychotropic stings. Katniss' aim with a bow and arrow is as spot on as Dorothy's with a whirling, dervish house or a bucket of cold water.

Like Dorothy, Katniss has supporters to accompany her on her journey. She's got a drunken coach (Woody Harrelson), an image creator (Lenny Kravitz) and Peeta Mellark (Josh Hutcherson), the male tribute from District 12, who has a heart, brains and courage.

Under Ross' direction, from a script written by Ross, Collins and Billy Ray, "The Hunger Games" sets two points of view in opposition. The Capitol seems lush and appealing, but a sickness lurks in the abundance. As the movie progresses, the initial shine wears to the dark unpleasant woods of the games, where children murder other children. Home, no matter how bleak and desperate, is where people who matter live, and every single one of the tributes wants to return home.

While a tornado brings Dorothy to Oz, whipping camera frenzy escorts Katniss and Peeta to the Capitol and the games. Ross uses the "tornado effect"—the ultimate shaky cam—liberally. The tribute selection process in District 12 voraciously swirls from one image to the next. The fight scenes barely register on the eye, because the blur distorts the action.

However, the stellar performances of Lawrence, Hutcherson and the rest of an impressive cast push the weaknesses in Ross' mise en scene to the back.

Lawrence, in particular, grounds the absurdity of the film into an emotional experience. The scene where mocking jays sing after Katniss buries Rue—one of the young tributes from an agricultural district with hints of the Deep South—is exquisite. I only wish the film had more scenes like that.

I enjoyed the film, but found it about as satisfying as a bag of salty popcorn. Post-movie, only music by T-Bone Burnett and James Newton Howard resonated.