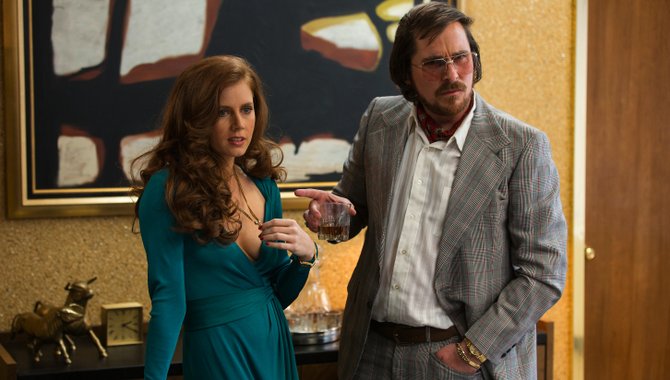 While coming of age in the late 1970s, my high school friends and I used to go to teen night at Gilley's Club, a honky-tonk establishment in Pasadena, Texas. We rode the bull and danced the hustle until the joint shut down before midnight. The '70s were magnificent—big hair, garish clothes and disco balls. It was a creative time for politics, arts, music and culture. And in this fertile milieu, con artists developed their own Americanized hustle, a showy dance of trickery and deception on easy marks who desperately sought to believe the impossible.

David O. Russell's "American Hustle" captures the optimism and excesses of the '70s. It begins with the ubiquitous "some of this actually happened." This film, which took inspiration from the FBI's ABSCAM sting operation, provides a rich character study of the hustle to get rich and famous, no matter what side of the legal fence you may sit on. "American Hustle" is in many respects, much more textured and nuanced than "Argo," last year's Academy Award winner for Best Picture. "American Hustle" drills deep into betrayal, power lusting and other human flaws with a wicked sense of humor.

The movie opens on Irving Rosenfeld (Christian Bale) preparing for a meeting. He's fussy about his appearance, and the contradiction between the careful teasing of an elaborate bad comb-over and his protruding gut make this man instantly likeable.

Rosenfeld and his business partner, Sydney Prosser (Amy Adams), are part of an FBI surveillance operation that Richie DiMaso (Bradley Cooper), an ambitious federal agent set on making a name for himself, is heading. The tension among the three is palpable, and an undercurrent of strong emotion, resentment, jealousy and fear is evident. The Steely Dan song punctuates the reluctant relationship of the con artists and the FBI agent: "I'm a fool to do your dirty work, Oh yeah, I don't want to do your dirty work no more."

The film, which Russell and Eric Singer wrote, provides a quirky backstory. Rosenfeld and Prosser meet at a pool party in Long Island. They share common interests in Duke Ellington and are both survivors of pull-yourself-by-the-bootstraps lives. The two become business partners and lovers. Scenes in Rosenfeld's dry cleaning business play out the romance among hanging clothes in clear plastic waiting for pick up.

Rosenfeld's wife, Rosalyn (Jennifer Lawrence), suspects that her husband is with another woman, but she knows he will always come back to her and her son. She is a Picasso of passive-aggressiveness, and Rosenfeld always falls under her spell. She thinks it's because of her nail polish, which smells sweet and decadent.

Then there's DiMaso. He lives with his demanding mother and wants to bring down anybody. He catches Rosenfeld and Prosser in a scam and forces them to give up four other people to get off the hook. DiMaso doesn't play well with others, throws temper tantrums and even beats on his boss.

Through Rosenfeld's ingenuity, DiMaso sets up a sting operation of Mayor Carmine Polito (Jeremy Renner), a man who is beloved by his constituents and wants to create new jobs by building a casino. The scam is that an Arab sheik is willing to invest in the casino, but deals and bribes are part of it. The head of the mafia (Robert DeNiro) wants a $10 million cut for the deal to work. And then there are other complications, which involve congressmen and a U.S. senator. It's tricky.

"Did you ever have to find a way to survive and you knew your choices were bad, but you had to survive?" Rosenfeld asks.

This movie is a passionate, heated landmark about survival and greed. The acting, often improvised, is splendid, free and chaotic. The actors, under the direction of Russell ("The Fighter," "Silver Linings Playbook"), pull viewers into webs of lies and deceit, and the characters are spontaneous and unpredictable. Rosenfeld expresses a moral punch that knocks out his FBI captor. This movie is a pop-culture masterpiece and one of the best films of the year.