'12 Years a Slave' Rises Up at Academy Awards 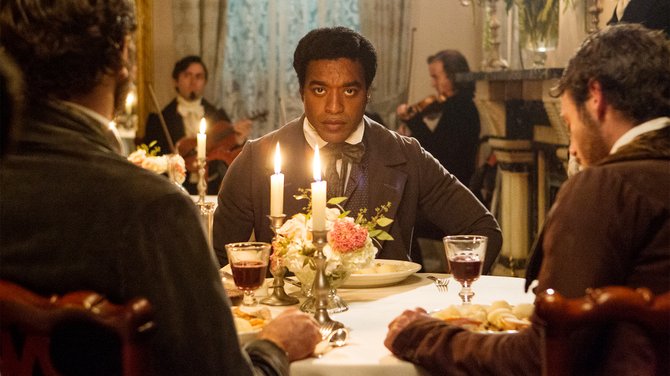 Steve McQueen's slavery odyssey, based on Solomon Northup's 1853 memoir, has been hailed as a landmark corrective to the movie industry's virtual blindness to slavery, instead creating whiter tales like 1940 best-picture winner "Gone With the Wind." ''12 Years a Slave" is the first best-picture winner directed by a black filmmaker.

Steve McQueen's slavery odyssey, based on Solomon Northup's 1853 memoir, has been hailed as a landmark corrective to the movie industry's virtual blindness to slavery, instead creating whiter tales like 1940 best-picture winner "Gone With the Wind." ''12 Years a Slave" is the first best-picture winner directed by a black filmmaker.

"Everyone deserves not just to survive, but to live," said McQueen, who dedicated the honor to those, past and present, who have endured slavery. "This is the most important legacy of Solomon Northup."

The normally reserved McQueen promptly bounced up and down on stage, later matter-of-factly explaining his joy physically took over: "So, Van Halen. Jump."

Those two films came in as the leading nominee getters. David O. Russell's "American Hustle" went home empty-handed, but "Gravity" triumphed as the night's top award-winner. Cleaning up in technical categories like cinematography and visual effects, it earned seven Oscars including best director for Alfonso Cuaron. The Mexican filmmaker is the category's first Latino winner.

"It was a transformative experience," said Cuaron, who spent some five years making the film and developing its visual effects. "For a lot of people, that transformation was wisdom. For me, it was the color of my hair." To his star Sandra Bullock, the sole person on screen for much of the lost-in-space drama, he said: "Sandra, you are 'Gravity.'"

But history belonged to "12 Years a Slave," a modestly budgeted drama produced by Brad Pitt's production company, Plan B, that has made $50 million worldwide — a far cry from the more than $700 million "Gravity" has hauled in.

Ellen DeGeneres, in a nimble second stint as host that seemed designed as an antidote to the crude humor of Seth MacFarlane last year, summarized the academy's options in her opening monologue: "Possibility number one: '12 Years a Slave' wins best picture. Possibility number two: You're all racists."

DeGeneres presided over a smooth if safe ceremony, punctuated by politics, pizza and photo-bombing. Freely circulating in the crowd, she had pizza delivered, appealing to Harvey Weinstein to pitch in, and gathered stars to snap a selfie she hoped would be a record-setter on Twitter. (It was: Long before midnight, the photo had been retweeted more than 2 million times and momentarily crashed Twitter.) One participant, Meryl Streep, giddily exclaimed: "I've never tweeted before!"

But in celebrating a movie year roundly considered an exceptionally deep one, the Oscars fittingly spread the awards around. The starved stars of the Texas AIDS drama "Dallas Buyers Club" were feted: Matthew McConaughey for best actor and Jared Leto for best supporting actor.

McConaughey's award capped a startling career turnaround, a conscious redirection by the actor to tack away from the romantic comedies he regularly starred in, and move toward more challenging films.

"It sort of feels like a culmination," he said backstage.

Leto passed around his Oscar to members of the press backstage, urging them to "fondle" it. The long-haired actor, who has devoted himself in recent years to his rock band 30 Seconds to Mars, gravely vowed: "I will revel tonight."

Cate Blanchett took best actress for her fallen socialite in Woody Allen's "Blue Jasmine," her second Oscar. Accepting the award, she challenged Hollywood not to think of films starring women as "niche experiences": "The world is round, people!" she declared to hearty applause.

Draped in Nairobi blue, Lupita Nyong'o — the Cinderella of the awards season — won best supporting actress for her indelible impression as the tortured slave Patsey. It's the feature film debut for the 31-year-old actress.

"It doesn't escape me for one moment that so much joy in my life is thanks to so much pain in someone else's, and so I want to salute the spirit of Patsy for her guidance," said Nyong'o. She also thanked director Steve McQueen: "I'm certain that the dead are standing about you and they are watching and they are grateful, and so am I."

John Ridley won best adapted screenplay for "12 Years a Slave," shifting praise to Northup: "Those are his words. That is his life." Spike Jonze took best original screenplay for his futuristic romance "Her," the category Russell had the best chance of winning.

Though the ceremony lacked a big opening number, it had a steady musical beat to it. To a standing ovation, Bono and U2 played an acoustic version of "Ordinary Love," from "Mandela: Long Walk to Freedom." Pharrell Williams had Streep and Leonardo DiCaprio dancing in the aisles with "Happy" from "Despicable Me 2."

Pink was cheered for her rendition of "Somewhere Over the Rainbow," part of a 75th anniversary tribute to "The Wizard of Oz." And Bette Midler sang — what else? — "Wind Beneath My Wing" for the in memoriam segment — an especially heartfelt one, considering the deaths of Philip Seymour Hoffman, Harold Ramis, James Gandolfini and others.

Best documentary went to the crowd-pleasing backup singer ode "20 Feet From Stardom." One of its stars, Darlene Love, accepted the award singing the gospel tune "His Eye Is on the Sparrow": "I sing because I'm happy/ I sing because I'm free."

"We're all just trying to make films that touch people," said co-director Chris Buck backstage. "Once in a while, you get lucky."

Though the Oscar ceremony is usually a glitzy bubble separate from real-world happenings, international events were immediately referenced. In his acceptance speech, Leto addressed people in Ukraine and Venezuela.

"We are here and as you struggle to make your dreams happen, to live the impossible, we're thinking of you," said Leto.

Russian state-owned broadcaster Channel One Russia said it would not broadcast the Oscars live because of the necessity for news coverage of Russia's invasion of Ukraine's Crimea peninsula. It will instead transmit the Oscars early Tuesday morning, local time.

Venezuelan protesters, via social media, urged Oscar winners to bring attention to their plight. Anti-government protests have roiled the country in recent weeks.

Italy's "The Great Beauty" won the Oscar for best foreign language film. In accepting the award for his rumination on life and Rome's decadence, director Paolo Sorrentino thanked his heroes, including Federico Fellini, Martin Scorsese and soccer star Diego Maradona.

In her opening, DeGeneres gently mocked Hollywood's insularity, referring to the headlines that have swamped the Los Angeles area lately with a slightly less serious news event.

"It has been raining," said DeGeneres. "We're fine. Thank you for your prayers."

ABC, which aired the ceremony, hoped the drama of a razor-thin best-picture race would be enough to entice viewers. The show last year drew an audience of 40.3 million, up from 39.3 million the year before when the silent-film ode "The Artist" won best picture.

There was a sense of deja vu Sunday. As she hit the red carpet, "American Hustle" star Jennifer Lawrence briefly collapsed in a heap of laughter, just as she tripped ascending the stairs last year to accept best actress for "Silver Linings Playbook."

"If you win tonight," said DeGeneres, "I think we should bring you the Oscar."

No delivery was needed, as the night belonged to "12 Years a Slave."