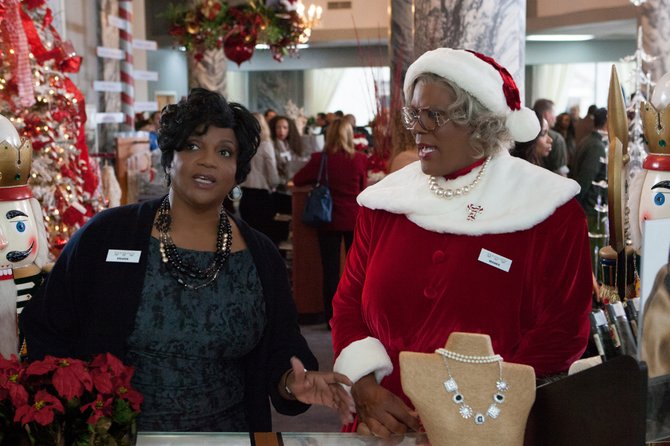 Festive and smart in pearls and Mrs. Claus gear, Madea dishes out her special Christmas cheer and engages in naughty and nice repartee with Larry the Cable Guy. This film, which marks Perry's 17th movie, may not be the darling of critic circles (so far scoring 16 percent on the Rotten Tomato meter), but it does what it sets out to do, which is to entertain those who want to be entertained by Perry's style of Madea humor.

One of the things Hollywood used to be good at was producing enjoyable, seemingly effortless screwball comedies such as "Big Momma's House," "Tootsie" and "Mrs. Doubtfire." These movies were factory products and commercial as all get up and go, but took off into their own sphere of men-in-drag.

Women trussed up as men, such as Barbra Streisand in "Yentl" or Julie Andrews in "Victor Victoria," are serious affairs and don't tweak the same funny bone. Methinks, like Shakespeare, that women and men pretending to be women have much more fun than any version of male. Tyler Perry has capitalized on that, laughing all the way to the bank, ignoring the shards of criticism hurled at his Madea pictures.

I joined the Madea fan club with "Diary of a Mad Black Woman." Who doesn't love a matriarch without a verbal filter? She says what we think, and then acts on her impulses. My favorite Madea moment is her Solomon-esque splitting of marital assets with a chainsaw. Madea has never been better than in "Diary of a Mad Black Women," but she is always watchable.

In "Tyler Perry's A Madea Christmas" (as if we need reminding that Tyler Perry and Madea are one and the same), Madea takes a holiday job at an upscale department store at the urging of her niece Eileen (Anna Maria Horsford). When Lacey (Tika Sumpter), Eileen's only child, says she can't make it home for Christmas, Eileen and Madea hitch a ride with Lacey's old boyfriend (J.R. Lemon) and road trip to the rural Alabama community where Lacey lives.

Lacey has dumped city life for teaching in a struggling school. She holes up on a farm and has a good-looking country boy named Connor (Eric Lively)—or, as Madea says, "Coroner"—looking after her "crops." Connor's parents (Larry the Cable Guy and Kathy Najimy) arrive shortly after Eileen and Madea take over the house. Family tensions run high, a Christmas pageant is on the brink of ruin and Scrooge is not Madea, but Eileen, who has a hard time reconciling some black and white issues.

Larry the Cable Guy and Najimy infuse some "Duck Dynasty"-esque laughs. Tika Sumpter and Eric Lively are bewitching to the eyes, and you can feel the camaraderie among the cast.

What's good about the Madea character is that it enables Perry to show a purely farcical side of himself, and he has some inspired moments. Madea's telling of the birthing of Jesus to the little children is gut-wrenchingly funny. And when Madea smiles, Perry is more likeable as a movie star than he has ever been before.

That doesn't take away from the sappy sentimentality flowing through this movie like the sweet sugar high in "It's a Wonderful Life." Perry's the Frank Capra of our generation. Let's hope that we're not too cynical to want to see good things happen to all people.