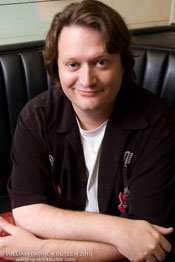 I recently had a chance to sit down with Adam Perry, account and distribution manager for the Jackson Free Press, to talk about his first novel, "Boxing Gorillas." The story is a well-paced and fun read that deftly blends elements of suspense, comedy and action into an engaging romp through Alabama, highlighting the oddball characters the South seems to nurture. A misfit's journey from Hattiesburg to Gulf Shores at the behest of his best friend sets the ball rolling, and from the start things go from bad to screwy to downright life-threatening.

The story is told with Perry's crisp prose and his character's pervasive laid-back world view. Trust me when I tell you: It's a page-turner.

What are the origins of the book?
Well, it's not like I'm trying to write the Great American Novel. It's pulp. ... I'm a child of the "Star Wars" generation. I like stuff that moves. ... It (reads) like a movie because, honestly, I'm a pretty big reader, but I'm a much bigger movie buff. I grew up on "Indiana Jones" and all that kind of stuff, and that has filtered into how I write, because I don't want to sit there and get bogged down. ... I kept hammering at it and hammering at it, and I knew I finally had done right when Josh Gordon (a friend and former creative-writing instructor), who was editing it, called me back, and the first words out of his mouth were "F*ck you." I was like, "Yes. Yes! I've done it, I've finished it."

Who is publishing "Boxing Gorillas"?
It's (self-published through) lulu.com. I did the standard thing: sent out query letter after query letter, you know, got rejection after rejection. I didn't stand for it as long as other people. (Laughs) I got my handful and figured, man, I could sit here for the next five years collecting a notebook full of rejection letters, or I could just do this myself. Plus, (publishers) wanted me to do all the marketing for it, anyway. And don't think I'm not going to shop the heck out of it, still.

I am assuming that "Boxing Gorillas" has certain semi-autobiographical aspects to it?
The first 30 or 40 pages of the book are straight from my playbook at that point in my life. I moved (to Gulf Shores, Ala.) right after college in '98. I was supposed to move down there with a friend of mine who played in a band with me at the time. He calls me on Wednesday—we're supposed to move on Friday—and says, "Man, I can't do it." So I called a buddy of mine, Jeff Gunner, he was working at Sal & Phil's, and told him I needed a roommate. He said: "Sure, I'll be there. Let me call you back after the lunch rush." So we moved that weekend. A friend of mine found us an apartment literally right across the street from the beach, dirt cheap, 500 bucks a month or something split between us. We went down there and raised hell, got stupid.

So how many of these characters are based on people you knew?
All of them. Some of them are direct relations to the people they're based on; some of them are mish-mashes of three or four people. Mason's best friend in the book, David, looks like one of my friends, and he reacts like two other ones, and both of David's kind of extremes are ... one guy's one extreme, and one guy is the other extreme. That's kind of how I put him together. But Lou is based right on someone—the look, the car, the Elvis thing—and he's also just like a total dumbass. (Laughs) Jack is based on somebody. Mason is a lot of me and a lot of other people, and it's no surprise that he falls in with these people; these are his people, his tribe.

The book leaves the door wide open for a sequel. Any plans for these characters in the future?
I've got three sequels mapped, completely mapped. I've got two or three different scenarios, and I'm just trying to see which one of them is
going to play better over the long haul. I've just got to throw it on the page
and see how it lays. At this point it's all just buckshot. I'm spit-balling everything at the page now and just seeing, you know?