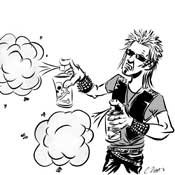 If you are familiar with the Arts & Entertainment Channel, or A&E, then you've probably caught a glimpse of real-life exterminator Billy Bretherton who faces insects and much larger pests. Boasting a 40 percent gain in overall viewers in its second season, "Billy the Exterminator" has become a genuine cable hit, overshadowing the network's previous draw, "Dog the Bounty Hunter."

Bretherton's boundless energy and enthusiasm on screen is just as palpable in person, as I had the pleasure to discover when I ventured south to the Vexcon Inc. headquarters in Benton, La.

Tell me about your path to becoming an exterminator.
Air Force intelligence was exactly what I wanted--CIA FBI, Bildeberg, Illuminati type stuff--but, you know, it didn't work out for me, and here I am today, and the Air Force was the reason. They put me in extermination. I thought I was the Orkin Man. I was really upset, and then when I got to Nellis Air Force base, they're telling me to keep the coyotes off the runways so these $30 million jets don't pull them into the engines and explode.

So how did Vexcon come about? Can you give a little history of the creation of the company?
I was up in New Jersey, and my boss at the time ... was talking about retiring, and his son and me just didn't get along at all. My mom and dad were born and raised here, and they wanted to retire. They bought land, ready to build a house, and in '96, me and my brother ... came down here to a small community. (We) had never been in a city smaller than one million people, so we were big city guys in every way. I thought food came from grocery stores, you know; I mean, I was ignorant and stupid in every way.

What was the genesis of the name Vexcon?
The word "vex" is associated with a spiritual force of wickedness and negativity and plague. I joke constantly that I fight the boogie man every day and his armies. "Vex" was really wrapped up. The second thing that was cool about it is before the guillotine, it was called a convex, and it was a convex blade used for whacking off the heads of royalty and kings and stuff. (Points to the Vexcon logo on his shirt.) Notice that's a skull and bones, not a cockroach head. (Laughs) And you can see the logo is like convex. The third thing I like about it is a convex lens arcs and bends light. I think arcing light is a very powerful symbol so I very much enjoy that.

You seem to take an eco-friendly approach. Is there a philosophy behind that?
Believe me, I am always about protecting the environment, doing everything smart, but I can exterminate. I mean I really can do it; I'm gifted at this, and if there's a problem, extermination is really my talent. ... I mean saving's a good thing, but I'm an exterminator!

Louisiana has been hit hard by Hurricanes Katrina and Rita, and then last summer's BP oil spill. What are your feelings regarding the last few years' devastation?
Looking at all the damage and the horror from Katrina, because it's still there, and seeing the oil coming in and everything, in our area you know you see it on TV and not the bad stuff. When Rita came through, every single pecan tree rotted out that year; the pecan, the fruit rotted. You can't explain stuff like that. There is no understanding of what happened there, you know, but we feel like we're under plagues here. We feel like here things are just way out of whack and getting crazy but I don't know if everyone else is feeling it.

I have to ask, because you find yourself in some pretty unusual situations on screen. What is the oddest job you've gone out on?
The oddest, I like that. Golly, so many. I got a call about two years ago, and they were ready to clean the cottonseed out and utilize the warehouse and its space, but they had to get these rats out of there. So they call me. And walking around, I could see in the palettes just holes and burrs and rats looking out and everything. I'm like, "My word!" I couldn't believe it. So I had 125 snap traps, all I had in the entire office. I went and set in this perfect square 125 snap traps. When I got done, I had filled up 30 gallon, real heavy duty, contractor trash bags, and I filled up like six or seven of these things just stock full of these dead rats. I'll get letters: "You should even relocate a rat, you shouldn't kill rats." Where do I relocate something like that? Who wants the things? They have plagues and diseases ... and they're disgusting.

How is it working with A&E, and to what do you attribute the broad appeal of your program?
I really like A&E. I hope they like me, because I'm kind of a wild child, and I bet it would be tough to deal with me. But they do a really good job, and they're very catering to their talent, very open to listening to any complaints, very good network. I really very much enjoy them. We hit every demographic from 2 to 92. I think what it is, basically with a family demographic, it's humor, the danger of the job and all this stuff, it's a little bit out there ... but it's still very energetic and still very entertaining for everybody.

"Billy the Exterminator" airs on A&E Tuesday nights at 8:30 p.m.