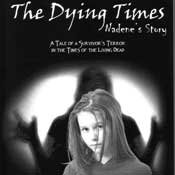 Brandon can lay claim to a new author. Brian Kittrell's first foray into writing yields some admirable results and an ambitious plan for future novels. His first book, "The Dying Times: Nadine's Story" (Late Nite Books, 2010, $9.99), is also the first in "The Survivor Chronicles" series.

This first book lays some interesting groundwork for what could be an epic tale in the same vein as Stephen King's "Dark Tower" (Signet, 2003, $32.96 for the set of four books) or a fictional universe along the lines of H.P. Lovecraft's Cthulhu Mythos. More likely comparisons are apt to be made with George Romero or Robert Kirkman's "The Walking Dead" (Book One, Image Comics, 2010, $34.99) because, yes, we are in zombie territory.

At the opening of "The Dying Times," the reader is introduced to 13-year-old Nadene, a girl with a touch of clairvoyance. Her new gift is not in the melodramatic entranced-soothsayer model, though, as this would have derailed the story from the outset, but, as she so plainly states to those around her as time passes, it is not something she has any mastery of. "I can't control it. It's random," she says, having only recently manifested this ability.

Kittrell uses this aspect sparingly during the course of the book—a distinct case of less is more.

Once the author establishes the cause of a zombie plague, things move straightforwardly as Nadene and a ragtag crew of survivors tries to head away from the East Coast toward the less-affected American west. This, of course, is the crux of the story: staying alive and getting to safety.

Moving from the Gulf Coast toward the supposed safety of Texas becomes an arduous bid for salvation. And while Nadene is definitely not the leader of her group, she does have a significant voice in matters regarding their collective fate. As things progress, her cohorts learn to heed her profound foresight, and this leads to one of the more tension-building moments in the book.

Often in zombie tales, who you start out with is not who you end up with. Significant characters meet bad ends in a bid to underscore the severity of the search for safety, while background characters get pulled to the forefront of the story when you least expect it.

As to Nadene's traveling companions, you'll find yourself rooting for the core of this group. You'll meet homeless Wayne, police officer John, and Susan, the police dispatcher. It is Wayne who acts as navigator for the group. "I've been homeless. I've been to prison. I've been in the military. I know how to survive harsh environments," Wayne says, and he uses his knowledge of the coast to guide them.

John keeps the group focused and on target, if only to stay alive. "Oh, don't give me that. I came with you to save my own skin. It wasn't out of some glorious reason to protect y'all," he tells them.

In Susan, Nadene finds a surrogate mother figure. "No one could have stopped that, Nadene. It's not your fault, honey," she tells Nadene in an effort to comfort the girl as best she can in this unavoidably ugly new reality.

Kittrell chose to avoid the common route of throwing wildly disparate characters together in an attempt to raise the tension level. To the author's credit, he avoids that in favor of creating a familial dynamic within this band of survivors.

The setting of this story, the Gulf Coast running between Alabama and Mississippi, will instantly give readers a sense of localized dread. Generally, authors in this genre tend to go for large urban centers or cross-country treks that last for weeks, if not months. Instead, Kittrell conveys a palpable sense of urgency to the plight of his antagonists by keeping the setting close to home and within a short timeframe.

This is an impressive debut for the author. As the series progresses, it will be interesting to see where Kittrell takes his readers, as well as seeing how writing over the course of it will affect the actual craft of writing. He's off to a solid start, and this reviewer looks forward to the next books in the saga, "The War of the Dead: Andy's Story" and "Prisoner and Survivor: William's Story" (both: Late Nite Books, 2011, $9.99).

Brian Kittrell's "The Dying Times: Nadine's Story" is the first book in his Survivor Chronicles series. The self-published series is available from Late Nite Books (http://www.latenitebooks.com) through online retailers.