To Jump or Not? | Jackson Free Press | Jackson, MS

To Jump or Not? 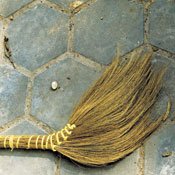 Jumping the broom is an old tradition symbolizing the union between two people.

If you haven't seen the movie, you've probably heard of it. Tyler Perry's comedy, "Jumping the Broom," tells of two families of different social and economic backgrounds united for a wedding. Among other disagreements, one of the key arguments is whether the couple will jump the broom, a practice where the bride and groom literally jump over a usually decorated broom while holding hands, after the ceremony. The groom's family says it's a tradition, passed down for generations, while the bride's wealthier family says the practice is outdated and only serves as a reminder of slavery.

The family of the film's bride had it about right. While jumping the broom is a well-known practice in the African American community, it does have a stigma from slavery days.

There is some debate about the origin of the practice of couples jumping the broom. In Africa, Europe and the United States, couples practice the custom that dates back as far as the 1700s to the Asante people of Ghana. In the West African Asante custom, the broom held spiritual meaning, signifying sweeping away past wrongs or removing evil spirits. It also served to show the bride's willingness to clean the courtyard of the new home she joined. In Southwest England, Wales and in border areas between Scotland and England, some couples verbally agreed to marry without exchanging legal contracts. Others jumped the broom at their threshold to make their union "official" and create new households.

In the African American community, the custom has mixed reviews. During the days of slavery, marriage between slaves was not legally recognized because marriage was a civil contract, and the country didn't recognize slaves as citizens. Jumping the broom, always done before witnesses, served as an open declaration of settling down.

After the Civil War, former slaves were legally recognized as citizens and were able to be married, so the practice was largely abandoned. A small number of African Americans continue to practice the custom, but the majority rejects it because it is a reminder of slavery.

Ultimately, like any other wedding tradition, jumping the broom should not become a source for conflict during the wedding-planning stage. Every couple is different. If you find the practice is outdated, do not feel forced or obligated to use it.