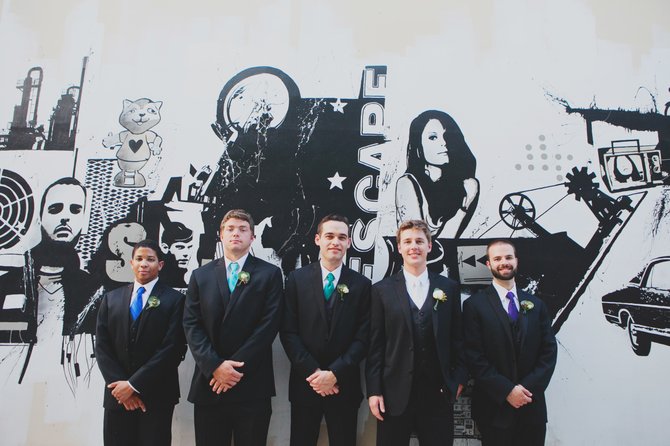 In the past, groomsmen and the best man were chosen based on their skill with a weapon. Pictured from left to right are David Williams, Creighton Nelms, best man Chris Awwad, groom Brian Mitchell and Andrew Olinger, from Mitchell’s wedding in May. Photo by Elizabeth Ray Photography

Perhaps you’ve attended or were a part of a beautiful wedding ceremony: five lovely bridesmaids, five handsome groomsmen, the bride’s father proudly walking the bride in her gown down the aisle to her future husband. At the reception, the newly married couple tells of plans to honeymoon on a remote island. Although it all seems romantic now, the original purposes of these traditions are somewhat darker.

In almost every culture, the history on marriages is about the same. Boy meets girl. Boy loves girl. Boy asks permission from the girl’s family to marry girl. Sometimes the family says yes, and sometimes ... well, that’s where things get sticky. If the family agrees, then the boy proposes and, in the past, the girl usually had no choice but to agree. In centuries past, in some cultures, the bride’s father offered a dowry (money, gifts or livestock) in order to secure a suitable husband. These dowries were usually large, so the engagement was considered to be a business deal and not to be taken lightly. Now, if the family happened to not agree with the couple wanting to marry, it was perfectly OK for the father to refuse to allow it. The girl had no say.

Here’s where things get interesting. Say the couple goes on with their wedding, either with or without her family’s permission. Traditionally, five bridesmaids and five groomsmen attend the couple. The bridal party makes their way from the bride’s home to the church. The bridesmaids line up along the left side of the bride, and the groomsmen on the groom’s right. They remain there throughout the entire ceremony until the newlyweds leave for their honeymoon.

The traditional reason for five bridesmaids and five groomsmen comes from a Roman law mandating a marriage needed 10 witnesses. The bride would usually be dressed at home, with her face covered by a veil. Attendants still wear matching dresses, but those dresses used to also resemble the bride’s. Bridesmaids remained at the bride’s side for the rest of the day. This was because it was long believed that a woman was highly susceptible to lurking evil spirits on her wedding day. And if that wasn’t enough, there was always the risk of another man (jealous ex, secret admirer or even her father) kidnapping her during the processional to the church. She and her attendants would be dressed the same to confuse anyone or anything wishing to harm or disrupt the bride on her wedding day.

The purpose of the groomsmen was similar (to confuse anyone who might want to harm the groom), but included an additional aspect: the best man won his position in the wedding party by being the best at wielding a weapon. Remember, the bride was at risk of being kidnapped, either by a disapproving father or by outsiders—the Huns, Goths and Visigoths were especially known to take brides by force. The best man’s job was to use his weapon if necessary to be the first line of defense against anyone who tried to disrupt the wedding (runaway bride attempt included). This is also the reason that the woman stood on the left side of the man at the altar. Men usually carried their weapons on their right sides, so if the best man failed to protect the groom, then the groom needed his right side open and free should the need arise to draw and use his weapon.

If the ceremony went well and the couple was wed, they would quickly escape to a remote location for alone time. In the case of kidnapped or eloping brides, this “honeymoon” was used to hide her from her family, and give the couple time to become pregnant with a child, which would all but put any objections to the union to an end.

So, while a lot of the wedding traditions we see today make for moving wedding ceremonies, plenty of them have a history that may make a modern bride think twice.