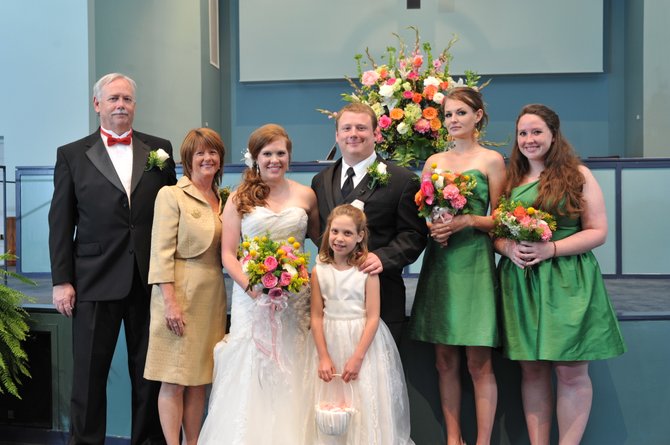 “Stand behind the keg and catch my legs,” she said.

“What?” came my brilliant response.

“Stand behind the keg and catch my legs,” she repeated, in the tone of voice people reserve for the slow of wit. “I’m going to do a keg stand.”

I repeated my brilliant response of, “What?” as I moved into position. Lori, my most-favorite relative, a 6-foot-plus, statuesque 28-year-old Victoria Secret-looking blonde wearing a too-short dress, had made sure no one need feel any inhibition in their dancing at my son’s wedding. She had then taken over the bartending duties, as the paid bartender was having trouble working the keg without foam.

Hiking her dress even further up her thighs, she placed the flexible spigot into her mouth and braced both hands on the edges of the keg. As she flexed her knees, I realized she was going to do a handstand on top of the keg. I broke out in a cold sweat over the thought of how this story would be interpreted the next 50 years at family reunions. One lesson learned early on in the Coupe side of the family: You expose no weakness, ever, as they are merciless.

The runup to the wedding had been relatively free of most of the drama I’ve seen in other weddings. Well, I say that, but there was a small brouhaha over the bridesmaids’ dresses. The bride, in an effort to be fair to her bridesmaids, told them, “any green dress will do.” She wanted them to buy something they liked and might wear again at other events. Not even a day later, my oldest daughter (all of the sisters of the bride and groom were in the wedding) sent back images of a few dresses she was considering. Most showed more flesh than green and were more suitable for a fairy princess (complete with wings) or a pole dancer. That caused the bride to issue stricter guidelines, which weren’t well received at all.

Then there was the whole nine bridesmaids and five groomsmen thing. My son was adamant, which for him is unusual, as he is a people pleaser like his mother. He said he had five friends, and he wasn’t asking anyone else to spend that kind of money to be in the wedding. He even scoffed at the helpful nominations of a couple of guy cousins from his aunts. But the couple amicably solved it and kept it a surprise. Most groomsmen escorted two beautiful bridesmaids down the aisle, one on each arm.

Of course, there was also that look on my wife’s face, part anger and part panic, that let me know without the slightest doubt that I had, yet again, made the wrong decision. It was Thursday evening, the day before we were to host the rehearsal dinner at our house and two days before our son’s wedding, and I had just asked an even dozen of our early-arriving relatives to come on over.

“What, are you stupid or something?” she asked. “I have a mountain of work to do before 100 people come to dinner tomorrow night, and I don’t have time to entertain. Take them to dinner or something—just get out of my hair.”

I manfully handled this by intercepting the relatives in the driveway and told them Anne had a migraine, and we went out for pizza.

My memories of the next couple of days are a dizzying blur. It reminds me of watching clothes spin in a dryer—you can pick out some colors and shapes, but mostly it is just an amorphous blob relentlessly moving in a circular motion. But then, the dryer doors pops open and out falls that pair of denim jeans you were looking for and one white sock.

I remember the delicious fried catfish at the rehearsal dinner catered by Cock of the Walk in our driveway (not to mention the leftover mustard greens that I told my wife not to order, as none of our northern relatives had ever eaten anything like them). I remember explaining to the same relatives that the onions were pickled and the pickles were fried, and the 35-foot Cock of the Walk trailer unable to back out of my driveway, until my kindly neighbor across the street waved him up onto his grass.

There were the looks of incredulity from my children when I told them that I was wearing a tuxedo that I owned—“You own a tuxedo?”—followed by the gasp of astonishment from the same children when they saw me in the tuxedo at the wedding. (I guess I clean up good?)

The wedding itself was surreal. Who was this gorgeous woman next to me? It couldn’t be the same woman to whom I have been married for 28 years? Is that really my son up there with that silly smirk on his face (a result of him jumping off the top bunk as a young boy and putting the end of the stick he was holding into his cheek)?

I recall the flower girl, my youngest, age 9, standing near the bride during the ceremony shrugging and mouthing, “What?” after my wife waved to her to stand still during the service. And I won’t forget her picking up the flower petals while processing out after the service (she had been told that she needed to pick them up after the service), until I snapped my fingers to move her along.

There’s the memory of the best man escorting my wife to her seat—he has been a special favorite of hers since his mother died when he was young—and his female friends, the ones he grew up with, gently confronting and good-naturedly teasing his possessive new girlfriend.

The reception suffered no shortage of people ready to party.

And then here we were, late in the reception. The bouquet and the garter had been tossed, the cupcakes eaten and now, only the diehards were left: immediate family, wedding party, good friends and those who never give up a free drink. And me, the father of the groom, in a tuxedo preparing to catch the ankles of my cousin’s daughter as she does a handstand on the keg with the spigot in her mouth. (Have I mentioned her dress was much too short?) Etched into my mind forever is the stricken look on my son’s face as he rushed across the dance floor shouting, “No, no, it isn’t that kind of party.” Lori calmly took the spigot from her mouth and looked at me, saying, “Next time.”

There were a few more sweet memories of the wedding. My oldest nephew, a combat veteran with two tours in Iraq and now a police officer in Florida, told me that the glow stick around my head (instead of throwing rice or birdseed as the bride and groom left, we waved glow sticks) would be a dead giveaway to any police officer looking for alcohol-impaired drivers—all the while wearing his own necktie tied around his head.

I remember the happy sound of Spanish chatter in my kitchen Sunday morning as my friend Isabel prepared a brunch for our out-of-town relatives with the help of my Spanish-speaking daughter and her two bilingual friends.

And then it was over, and the house was silent. The money spent, the newlyweds gone, the beer kegs returned and the relatives fed, entertained and, like good northerners, on their way home. And finally, the true meaning of the day burst on me when I saw this simple Facebook post, “Natalie Danforth Coupe is married.”

Like the Grinch, my heart grew three sizes that day.