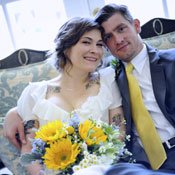 Caitlin McNally and Cody Cox tied the knot in March.

Wedding season isn't always a walk in the park for us southerners. Usually the heat and humidity begins to creep its way in, turning any outdoor wedding celebration into a sweat marathon.

However, this was not the case when two of Jackson's most charming, friendliest and most talented local musicians and baristas (he works at Cups, she at Sneaky Beans), Cody Cox and Caitlin McNally, walked down the aisle for the first time as husband and wife.

Sunshine and a comforting breeze set the stage for our two lovers, who also form the musical duo Liver Mousse. On Saturday, March 24, at around 3:30 p.m., I walked down the brick sidewalk leading into The Commons at Eudora Welty's Birthplace. Appropriately, the wedding venue is located behind Ole Tavern on George Street, which is like a second home to the couple.

Inside, the number of attending family and guests made for an intimate mix of people that made the space feel just right––not too crowded and not too bare (less really is more).

Each row of chairs was decorated with fresh, white and yellow flowers—perfect colors for a perfect day. Soft melodies from Tyler Kemp on a keyboard near the altar drifted throughout the room.

When the clock hit 4 p.m., everyone took a deep breath—it was time. A small parade of bridesmaids, groomsmen and family members made their way to their designated spots. Each bridesmaid walked down the aisle in a silvery-gray strapless dress, holding a bouquet of yellow and white flowers, the same arrangement from the rows. The four groomsmen were in full tuxedos accompanying the four bridesmaids.

As each got into place, the room filled with anticipation for the bride.

As the wedding march began to play, Caitlin's sweet giggle came from the back of the room. She entered with her father by her side, and just the sight of her happiness would have brought tears to anyone's eyes. Caitlin had on a simple, short-sleeve, floor-length white dress, her soft curls falling on either side of her shoulders. Most brides look like fairytale princesses as they walk down the aisle, but this bride was so much more. She was a sprightly fairytale angel—an all-over being of utter beauty. Though her dress was simple, it looked like a masterpiece. This radiant bride took everyone's breath away, especially the groom's. Cody stood in a trance with his eyes on Caitlin.

Tears began to well in eyes everywhere in the room as the ceremony began. The looks and smiles exchanged between the couple were sweet and playful as the pastor, Stacey Andrews, went over how the couple had met and fell in love. He began with when the couple met: "Caitlin was passing through Jackson heading to Oxford, Miss., with a friend. She stopped to get coffee and, lo and behold, Cody was behind the counter taking orders. It was (during) that first exchange that these two became smitten with each other."

It was apparent that Caitlin and Cody were very much in love when they recited their vows to one another, which was probably my favorite part of the ceremony. Each was soft-spoken; there was no way to hear them, which was meant to be. Everyone attending witnessed this sacred vow between the two.
The happy couple gazed at one another as they said, "I do," and joined hands as Andrews announced them Mr. and Mrs. Cody Cox. Everyone cheered as the newlyweds walked down the aisle to Queen's "You're My Best Friend"—priceless.

After the ceremony, guests went into the courtyard to congratulate the couple. Once outside and spread out, everyone seemed joyful and completely relaxed. Everyone moved freely about, with no ridiculous wait to see the new couple.

The bride possessed the qualities of a giddy child opening presents from Santa Claus on Christmas Day. The groom looked like the luckiest guy in the room—as if he were taking the coolest chick in school to prom.

Good things happen to deserving people. Little did this friendly, down-to-earth, talented and well-deserving couple know when they met at Cups that summer day almost two-and-a-half years ago that the universe would align, forever reminding how wonderful they are, inside and out—to the rest of the world, but most importantly, to each other.

Nicole Marquez is a native of Hot Coffee, Miss. She met Caitlin during a routine fire drill, and the two have remained friends since.