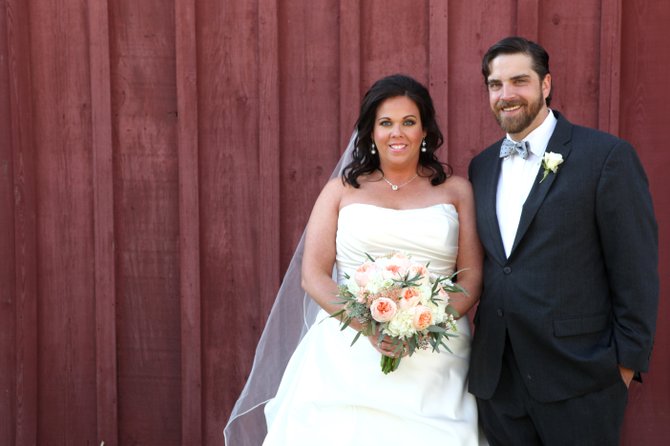 After Lindsey Brooks lost her father, she and her fiancé, Ryan Bell, decided to downscale the wedding and have a celebration of family, friends and the city they love—Jackson.

When she was a student at Mississippi College, Lindsey Brooks, now 30, attended a Blue and Gold social club party at Northpointe Barn and told a girlfriend, "I'm going to get married here." She forgot about that passing remark until 2014 when she wed Ryan Bell, 31—yes, at Northpointe Barn—and the friend reminded her.

Friends played a major role in the couple's story. The two met in May 2010, after Ryan moved to Jackson from Texas to help Craig Noone open a new venture, Parlor Market restaurant. Lindsey was also friends with Noone and, around that time, she introduced him to Richard Patrick and Austin Evans who, in April 2010, launched a new venture of their own—Cathead Vodka. On Memorial Day, Patrick, Evans and Noone rented a party boat on the Ross Barnett Reservoir to celebrate, and Noone invited both Brooks and Bell to join them for a day of fun.

From April 2012 to April 2013, the couple moved to Augusta, Ga., where Ryan was helping his mentor, Edward Mendoza, open a restaurant. "That (move) was when we learned to be best friends," Lindsey says. "We were poor and alone in a strange city." Living through that and "still liking each other" cemented the couple.

Then, in September 2013, back home in Jackson, Ryan popped the question. The couple collects paintings of camper trailers by their friend Hayley Hayes, and Lindsey decided to get one for Ryan as a gift. When she brought it home, she was disappointed when he told her he'd already seen it ... until he brought out another camper he'd had Hayes paint that said, "Marry me." Of course, she said yes, and he sealed the deal with her grandmother's ring with a new center stone he worked with Stein Jewelry to find.

The couple initially wanted a small wedding, but it quickly snowballed. Then, amid the planning, Lindsey's father passed away. "(The loss) really made us focus on who and what were important to us, so we downscaled," she says. "We wanted to make sure everyone at our wedding had impacted our lives in some way. It became about the people, rather than the production of a wedding."

Instead of a traditional rehearsal dinner, the couple hosted a "Brew Before I Do" for 50 friends and family members at Hal & Mal's, where the couple goes to happy hour every Friday. Chef PJ Lee and his wife, Brandi (Hal's daughter), are friends with Ryan and Lindsey, so that made it doubly special. Derek Emerson of Walker's Drive-In collaborated with Lee on food for the event. For Lindsey, the collaboration of an experienced chef like Emerson with a new one like Lee made for great results. "Even people who don't usually eat much went back for seconds and thirds," Lindsey says happily.

With music by Joey Plunkett and Anne Friday bartending, "It couldn't have been more 'Jackson,'" she says.

The next day, seven bridesmaids wore black cocktail dresses of their choosing, while eight groomsmen wore gray suits with dark silver and purple bow ties, which the groom selected from Great Scott. Though the bride laughs that she "hated the process" of dress shopping, she found the perfect one at The Bridal Path. "I didn't look like I was playing dress-up," she says.

The nuptials and celebration took place at Northpointe Barn, transformed with flowers and food by Wendy Putt of Fresh Cut Catering and Floral. After the ceremony, which a childhood friend of the bride, Rev. Courtney Allen, officiated, guests enjoyed a spread of southern food and beverages including specialty cocktails using Cathead products. A highlight of the evening was karaoke with DJ Stache, a nod to the couple's love of karaoke on Wednesday nights at Ole Tavern at George Street. The bride's cake by That Special Touch honored her late father's favorite bakery, and in lieu of a groom's cake, Whitney Evans Maxwell made individual mason jars of strawberry cake with black pepper icing, a recipe she made for her interview at Parlor Market.

After honeymooning in Napa Valley and San Francisco—including a dinner at the French Laundry and winery tours scheduled by Jackson wine broker Norm Rush—the couple returned to settle into life at home, where Lindsey works for Well Being magazine and Ryan is daytime sous chef at 1908 Provisions. They recently purchased a house, so making it a home is a fun new undertaking.

No doubt, it will include gatherings of lots of friends ... and one very special painting.