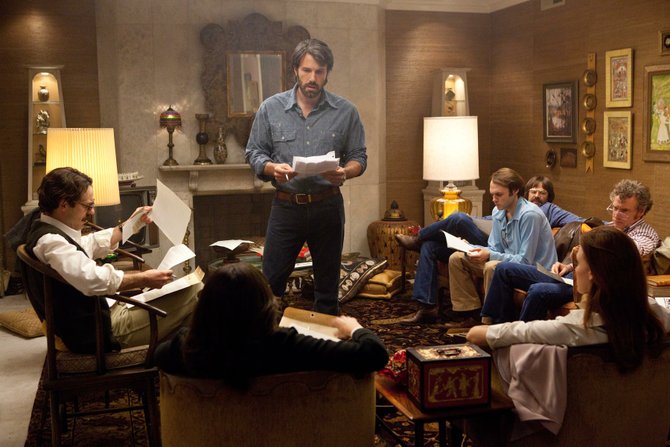 If movies provide a lens into our cultural soul, what do this year's Academy Award nominees say about the past year?

The thread running through the nine Best Picture nominees seems to be about channeling chaos into meaningful action. The best of them salve the wounds and offer a crumb of hope in a year with a struggling world economy, natural disasters, ongoing political wars, diplomatic stalemates and random violence in once-safe havens, such as movie theaters and elementary schools. Some even make us laugh, and that's the truly exceptional film when it comes to Oscar time, where the Academy voters give more weight to the deadly serious over comedic insights.

Four of the Best Picture nominees thoughtfully spin dramas from historical events. "Les Miserables," a musical based on Victor Hugo's masterpiece, covers the years after Napoleon Bonaparte's final defeat to the Paris Rebellion in June 1832. The movie explores politics, moral philosophy, religion, justice and the redemptive power of love through Jean Valjean's personal journey during this tumultuous period.

Steeped in the horrors of country at war with itself, "Lincoln" reveals the master politician Abraham Lincoln. Taking off the white gloves of virtue, Lincoln greases the wheels and manipulates partisan loyalties to earn most impressive achievement, the passage of the Thirteenth Amendment and the abolition of slavery.

In "Argo," a CIA agent offers the "best bad idea" for rescuing six U.S. diplomats in hiding during the Iran revolution and hostage crisis. A fake Hollywood production provides the cover. Alan Arkin's character sums it up: "If I'm gonna make a fake movie, it's gonna be a fake hit!"

"Zero Dark Thirty" tears through the wall of CIA secrets and shows us the long, painstaking process to find Osama bin Laden. Maya, a lone she-wolf heading the boots-on-the-ground investigation, won't give up until she has bin Laden, dead or alive (but preferably dead).

The other nominees cover the perils of individual action. In "Beasts of the Southern Wild," a young girl rides out a hurricane in a Louisiana bayou only to face her father's death. "Life of Pi" focuses on the co-existence of an Indian boy and Bengal tiger in a lifeboat bobbing along in the ocean at the whim of the elements. "Django Unchained" releases the rage of a former slave destined to get his woman back with the help of a liberal German dentist. In "Silver Linings Playbook," Pat Jr. reclaims himself from mental illness and marital failure. Then there's "Amour," an eloquent story about a husband, a wife and approaching death.

Best Director: Ben Affleck won the directing award from the Directors Guild of America, which is generally the strongest predictor of who wins the Oscar. Affleck won't win an Oscar, though, because he wasn't nominated. I can safely say that Benh Zeitlin, the first-time director for "Beasts of the Southern Wild" and David O' Russell for "Silver Linings Playbook" are in the foreground. That leaves a tight race between Steven Spielberg and Ang Lee.

Best Actor: Every nominee sizzled on screen, from Daniel Day-Lewis, who spent a year preparing for the role of Abraham Lincoln, to Hugh Jackman, Denzel Washington, Bradley Cooper and Joaquin Phoenix. If Day-Lewis wins, he will be one of a handful of actors to win three Oscars.

Dark Horse: Hugh Jackman ("Les Miserable")   Best Actress: Tough women, tough choices. Jennifer Lawrence won the Screen Actors Guild award in this category, but she might have offended some with her jokes on the other nominees. Still, Academy voters have thick skins, and Lawrence did make one awesome Katniss in "The Hunger Games," followed by her chameleon change in "Silver Linings Playbook"

Best Supporting Actor: A great list of nominees, including Tommy Lee Jones, Alan Arkin, Robert De Niro, Philip Seymour Hoffman and Christoph Waltz. The front-runners are Jones and Waltz, but both have won awards in this category before. I say donning a wig gives Jones the edge.

Best Supporting Actress: The favorite is Anne Hathaway. Her closest rival in this category is Sally Field, who already has two Oscars. Helen Hunt ("The Sessions"), Amy Adams ("The Master") and Jacki Weaver ("Silver Linings Playbook") are distant contenders.