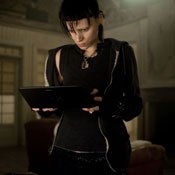 Rooney Mara stars as "The Girl with the Dragon Tattoo."

David Fincher's film adaptation of Stieg Larsson's international bestseller, "The Girl With the Dragon Tattoo," scorches the screen with a new-millennium Joan of Arc on a social crusade against violence. "I want you to help me catch a killer of women," Mikael Blomkvist says to Lisbeth Salander.

Salander (Rooney Mara) is an unlikely champion for any cause. She is tiny and withdrawn. Her hair is raised in spiked quills of black as if she's protecting herself against predators. Pierced eyebrows, nose, and lips complement a worn-out, black-leather jacket and heavy Doc Marten boots. She possesses an eidetic memory and cunning computer hacking skills. She doesn't speak much. Salander is a guardian of the state, adjudicated criminally insane for burning her father, we are told. And yet, this most unlikely of protagonists carries the story and provides the fire in the film.

After a unique title sequence, the action begins with the rendering of a guilty verdict against journalist Mikael Blomkvist (Daniel Craig) for 15 counts of aggravated libel of businessman Hans-Erik Wennerstrom (Ulf Frieberg). To preserve whatever remains of the magazine he owns with Erika Berger (Robin Wright), his sometimes lover and editor, he resigns from his post.

He accepts a job from aging industrialist Henrik Vanguard (Christopher Plummer) to investigate the murder of Henrik's niece, Harriet. It's a cold case, happening more than 40 years ago when the dysfunctional Vanguard family controlled old Sweden and shaped its industrial growth. Blomkvist can't do the job alone and requests assistance. Henrik's lawyer hires Salander to assist him. Salander did the investigative report on Blomkvist, and she knows things about him that no one else does. They investigate all the family members, from Henrik to his nephew Martin (Stellan Skarsgard), who runs the company, to the Nazi-sympathizers. It's a despicable bunch of family members, Henrik says.

Rooney Mara gives a breakout performance. You can hardly recognize her from her role as Erica Albright, Mark Zuckerberg's girlfriend, in "The Social Network." As Salander, Mara is a silent crusader, a dragon slayer, guided by her own moral compass in a corrupt system where she has been wronged. She's wary and flawed. She's absolutely transfixing.

Craig's performance lifts those around him. His character centers the plot, but Craig doesn't overtake the film. He holds back the charismatic charm of James Bond. His character is wounded, and he rebuilds his confidence from Salander.

"The Girl With the Dragon Tattoo" is a stunningly well-made thriller. Fincher trims back some of the original story to keep the momentum flowing forward. This movie is more bleak, visceral and atmospheric than its well-crafted Swedish counterpart directed by Niels Arden Oplev. Fincher doesn't soft-pedal the personal violations Salander experienced from her legal guardian or the traumatic violence young women experienced 40 years ago from a serial killer. It's raw and gut wrenching, where the Swedish version was cold and polite. This picture says that Salander is a brutal wretch who gets the dirty jobs done. "I am insane," she tells her legal guardian (Yorik van Wageningen) with a blowtorch in her hand.

But there is a touch of poetic lyricism in the cold isolation of the remote Vanguard island, where fire meets ice. That leads us into the second film in the franchise, "The Girl Who Played With Fire." I can't wait to see Salander back in action.