What Is Lumumba’s ‘Jackson Plan’? 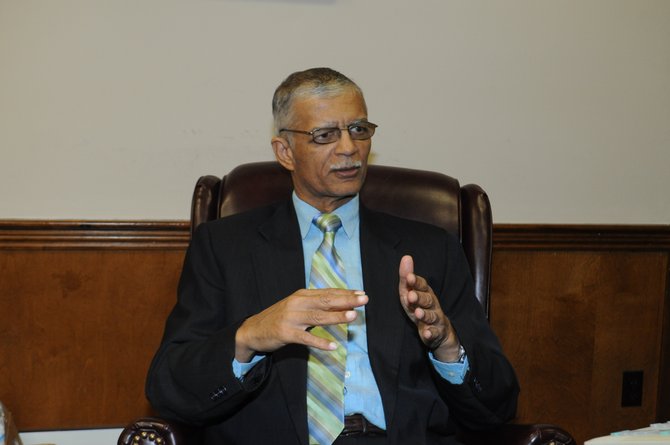 Chokwe Lumumba pushes a “Jackson-Kush Plan” sure to scare many voters and delight others. Photo by Trip Burns

For anyone still on the fence over whom to vote for in the Democratic runoff next Tuesday, it's likely that reading through the Jackson Plan will move his or her vote into one column or the other. Clearly, white conservatives may run screaming.

The controversial plan, also known as the Jackson-Kush Plan, and the J-K Plan, is chock full of black-nationalist ideals, including a decentralized government run by committees of "the people," and is peppered with politically loaded words like "solidarity," and "organizing." Its authoring source--it would not be correct to say that any one person wrote it--is the Malcolm X Grassroots Movement and the People's Assembly, organizations fully embraced by mayoral candidate Chokwe Lumumba. In fact, Lumumba is a founding member of both groups.

"The roots of our Assembly model are drawn from the spiritual or prayer circles that were organized, often clandestinely, by enslaved Africans--to express their humanity, build and sustain community, fortify their spirits and organize resistance," the plan states.

The plan has three main pillars:

• Building people's assemblies, a concept rooted in the Black Liberation Movement, which seek to "resist the systematic exploitation and terror of white supremacy and to exercise and exert some degree of self-determination," and build "autonomous power outside of the realm of the state (i.e., the government) ... with the express intent of building radical voting blocks and electing candidates."

• Building a network of progressive political candidates. The key strategies for people's assemblies are "mounting an effective defense and offense" by "building an independent political force that challenges the two party monopoly." The plan cites the 2009 election of Lumumba to the Jackson City Council and the 2011 election of Hinds County Sherriff Tyrone Lewis among its accomplishments.

• Building a local solidarity economy, defined as "a process of promoting cooperative economics that promote social solidarity, mutual aid, reciprocity and generosity," and include "worker cooperatives to informal affinity based neighborhood bartering networks." Specifics of this pillar also include housing co-ops, community development credit unions, local urban farms and farmers markets, working with young people to increase civic engagement and challenging "right to work" laws. Expanding green public transportation and creating a network of solar and wind generators is also is among its goals.

Read as a campaign platform, the plan can come off as a scary blueprint of a future devoid of democracy-as-we-know-it. After all, at its heart, the plan seeks to supplant the two-party system in Jackson, in Mississippi and beyond.

A close reading shows that the plan is, perhaps more than anything, open for interpretation. It could be less a blueprint than a statement of fact regarding the history and current economic status of blacks, poor people, women and other marginalized groups in Mississippi. It could also be seen as a wish list of how to change that marginalization through political and economic power "by any means necessary," although it acknowledges that "we cannot afford to ignore the power of the state."

The plan seems more philosophical in nature than political. It seeks to create a "deepening and expanding democracy in the state ... that can be employed today to enhance civic engagement and participation."

In that context, statements that may initially sound militant and radical could take on a softer edge:

"This alliance will intentionally be multi-national in its outlook and orientation, but be based in and lead (sic) by Black working class communities and forces. We assess our strategic allies being the growing Latino community and various immigrant populations. .... The strategic nature of these forces rests with our common interest in eradicating white supremacy and institutional racism. This alliance will also give due focus to building principled relationships with white progressive forces throughout the city and state who are essential to the current and foreseeable balance of power in the state. Our immediate aim is to win enough of these forces over to our vision and program so as to weaken, if not altogether neutralize, aspects of white conservative power in the state."

It is worth noting that although Lumumba is running under the Democratic Party banner, the plan makes a distinction between the traditional Democratic Party and the Mississippi Freedom Democratic Party of the mid-1960s. It's the MFDP--borne directly out of the African American civil-rights struggle--that Lumumba and other members of the MXGM say they represent.