A Quiet Push for ‘Kush’ 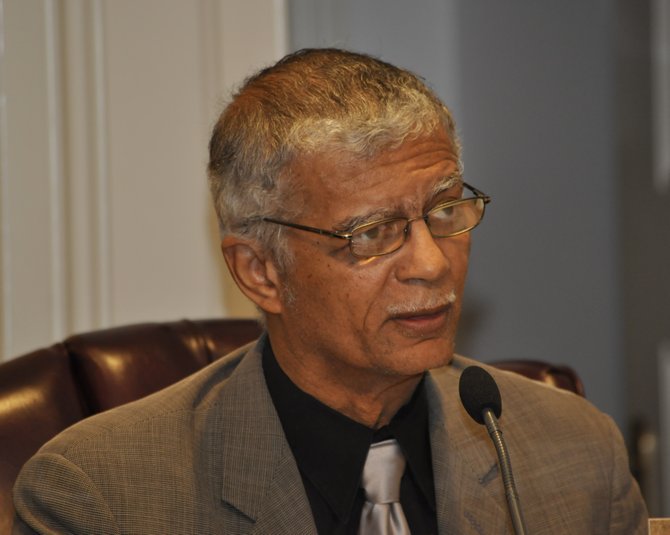 Mayor Chokwe Lumumba has talked about the Jackson-Kush Plan as a means to bring about self-determination for capital city residents. Now, he’s putting the plan into action. Photo by Trip Burns

In the early ‘70s, the Provisional Government of the Republic of New Afrika planned for the Kush District in western Mississippi to serve as power center for a new black-led nation in the South.

In the first millennium B.C., along the Nile in a region that is present-day Sudan, the civilization of Kush flourished as one of the mightiest black kingdoms of sub-Saharan Africa. The kingdom served as a model and namesake for the Jackson-Kush Plan, which the Malcolm X Grassroots Movement developed to promote self-determination, participatory democracy and economic justice in Mississippi.

Jackson Mayor Chokwe Lumumba, who founded MXGM, is ever so quietly slowly putting that plan into action for the capital city.

During this spring and summer, when the Jackson mayoral campaign season hit its peak, a fierce debate took place about regionalism. Broadly, the thinking behind regionalism is that taking a regional, rather than a city-specific, approach to economic development would help all the cities and counties in the region flourish.

Lumumba espouses a view of regionalism that is quite different from the Hinds-Madison-Rankin model, one that aligns with the Jackson-Kush plan.

"My concept of regionalism goes in the other direction. I would like to do some things in the western part of the state," Lumumba said.

Formally adopted in 2008, the Jackson-Kush plan grew out of the Black Liberation Movement of the 1970s in which Lumumba was also active as a member of the Republic of New Afrika. The RNA advocated for the creation of new black nation in the five contiguous states of Louisiana, Mississippi, Alabama, Georgia and South Carolina.

Lumumba, a former RNA vice president, helped purchase the first parcel of land near Jackson for the new black nation-state. Five months after the RNA bought the first parcels for the would-be country, on Aug. 18, 1971, Jackson police and agents from the FBI raided the heavily armed house used for RNA's headquarters in west Jackson at dawn with no warning, even bringing the infamous Thompson tank as reinforcement.

Jackson police Lt. Louis Skinner died in the shootout, and another police officer and a bureau agent were wounded.

Lumumba was not involved in the shoot-out that resulted in the arrests of 11 RNA members including its president, Imari Obadele, who also was not on the scene.

The Jackson-Kush plan is a revised, scaled-down version of the RNA's original plan. Western Mississippi, as Lumumba explained, is home to 18 contiguous counties, including Hinds County, that span from Wilkinson County in the southwest corner of Mississippi northward to Tunica County and where African Americans make up the majority of the population. By contrast, blacks make up almost 20 percent of Rankin County and 39 percent of people in Madison County.

Recently, Lumumba's administration has signaled a major shift away from the practice of outsourcing public-works projects. Instead, it is moving toward plans to grow the department to complete massive city construction projects—something that plays into Lumumba's philosophy that the city can play a direct role in injecting tax revenues into its own coffers through hiring rather than outsourcing.

Lumumba seems to have support from fellow central Mississippi mayors. Vicksburg Mayor George Flaggs, who formerly served as a state representative, plans to use his relationships with Gov. Phil Bryant and Speaker Philip Gunn to attract $25 million in state money and another $50 million from Congress, for infrastructure improvements he believes will help cities such as Jackson.

"I know where the money is, and I'm probably going to get it," said Flaggs.

Lumumba joked that he would get Flaggs' secret for prying money from the Mississippi Legislature, which has historically been hostile to the capital city's funding needs, to also lobby lawmakers for assistance.

For Lumumba, the most crucial part of securing self-determination is making sure Jackson residents participate in the economy and share in the wealth of the city and region.

Lumumba said building up city revenues to kickstart projects he promised to deliver during his campaign was a challenge, particularly in Jackson where many people live on fixed incomes.

Said Lumumba of those challenges: "The complications begin when you start to put the rubber on the road."

I applaud he Secretary of State for working so hard to solve a non existant problem. When he is finished, I hope he will spend money on real problems. There is simply no Voter Fraud that requires this law.

I applaud Mr. Lumumba for looking for new revenue sources for Jackson and trying to organically grow the region and in so doing, help the cities within and Jackson. He is building relationships with other political leaders that will be helpful at the local, state, and Federal levels.